Here’s how PTC characterizes the play: “Sarah [played by Florence] is having a rough time. She’s trying to shake it, but it’s not easy. She’s got a new doctor [played by Harbold] and she’s met a nice guy named Jake [played by Gearhart], so things are looking up. And Jake’s having a hard time, too. Together, Sarah and Jake are trying to find their way to each other — and maybe, just maybe, to some of that happiness we’ve heard so much about. A mysterious love story about the threads that tie us together, i is a gentle and unsettling new play set a couple days after tomorrow.”

The play, which has a boy-meets-girl quality at its center, began in an unexpected way, Talbott told me: “I had read an article a while ago about a scientific experiment being done on mice that intrigued me, in terms of its implications for treating humans, but didn’t know how it applied to a dramatic story, so I filed it away.  Then one day, when cleaning my computer, I found the article, and started to write the first scene in the play, which is a scene between a doctor and a woman. The play grew from there in some pretty unexpected ways.”

Talbott is no stranger to Pioneer’s Play-by-Play series, having enjoyed previous development on his play A Public Education in 2014 (in which actress Harbold appeared). As an actor, he appeared in PTC productions of Doubt, The Odd Couple and …Spelling Bee. His play The Submission (published by Samuel French) was the inaugural recipient of the Laurents/Hatcher Award in 2011 and was produced Off-Broadway by MCC Theater; it went on to receive the Outer Critics Circle John Gassner Award for New American Play in 2012. It was also a semi-finalist for the 2010 O’Neill Playwrights Conference. His play The Gravedigger’s Lullaby will receive a world-premiere Off-Broadway production in March 2017 by TACT at Theatre Row in New York City. Three Rules for the Dragon was a finalist for the 2016 O’Neill Conference and received a workshop in June 2016 at Premiere Stages at Kean University in New Jersey. Other plays include: A Public Education (finalist for the 2015 O’Neill Playwrights Conference; workshops at Pioneer Theatre Company and TACT), How to Build a City (workshops at TACT and Route 66), Elliot (readings – Crowded Outlet, MCC Theater), and All the Stars in the Midnight Sky (workshops/readings – MCC, TACT). He writes musicals with composer Will Van Dyke. Their musical Imagine Harry was presented in the 2015 NAMT Festival of New Musicals, and was a semi-finalist for the 2015 O’Neill Musical Theatre Conference as well as a finalist for the 2014 Rheinbeck Writers Retreat. They released an EP of their work in September of 2015 called A View of the River (available on iTunes or wherever digital music is sold). They recently were part of the Goodspeed’s 2016 Jonny Mercer Writers Colony finishing a draft of their latest musical, Wintersong. Talbott graduated with honors from the Yale School of Drama, and as an actor has been seen in theatres all over the country and in film and TV. Visit www.jefftalbott.com. 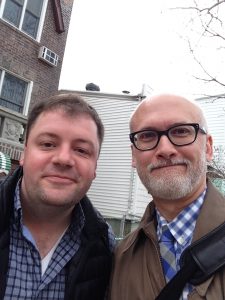 Director Wes Grantom and Jeff Talbott on break from an earlier collaboration.

Guest director Wes Grantom returns to PTC, where he directed the 2015 Play-by-Play title Speculator Spirits by Josh Tobiessen, later produced as Lone Star Spirits in an Off-Broadway showcase by Crowded Outlet. Grantom’s recent directing credits include Toxic Avenger by David Bryan and Joe DiPietro at Pittsburgh CLO, Eager to Lose by Matthew-Lee Erlbach at Ars Nova, The Cloud by Matt Moses, The Steadfast by Mat Smart and Mine by Bekah Brunstetter for Slant Theatre Project. Grantom also has a number of Broadway credits as resident and associate director, working alongside James Lapine, John Rando, Anthony Page, Rufus Norris and Emma Rice. He is a recipient of the Drama League Fellowship, a member of the Lincoln Center Directors Lab, a graduate of the University of Evansville and the artistic director of Crowded Outlet, based in Queens.

Salt Lake City actress Colleen Baum appeared in the 2014 PTC Play-by-Play reading of Alabama Story, which later had its world premiere on the company’s mainstage and went on to productions around the country. Harbold and Florence are also resident SLC actresses. Gearhart is a New York City-based actor who appeared in PTC’s The Philadelphia Story.

Dumke Auditorium of the Utah Museum of Fine Arts (UMFA) is on the campus of the University of Utah, 410 Campus Center Dr. in Salt Lake City. Get ticket information here.

I threw a few other questions at Talbott.

When writing about the relationship unfolding in this play, did you have a specific roadmap of events in the relationship, or on some level did you allow Sarah and Jake to take you along and surprise you?

Jeff Talbott: Sarah and Jake’s romance is the core of the play — in almost every way, it’s the entire play. I knew how it started and I knew how it needed to end. But everything in the middle was a surprise to me; and then once those surprises kept revealing themselves, I had to face the beginning (and particularly the ending) in some very different ways than I had anticipated.

Can you share who the other characters are in the play, beyond Sarah and Jake?

Jeff Talbott: I actually can’t. They meet other people on their journey (well, mostly Sarah meets them), but the audience meets them just as Sarah does — with very little information.

Can you share anything about the title of the play?

Jeff Talbott: Naming plays is a tricky business — hopefully the title of any play intrigues people to see it. It also sends a message that there are unknown things here, and that’s definitely by design. This play was always called this, in every iteration, for reasons that become clear pretty strongly by the time the play is over.

What are your goals in the PTC Play-by-Play week?

Jeff Talbott: To work with smart people for a week and make it better — it’s honestly the best thing in the world.  It’s a pretty compact piece of writing; I’m willing to bet it’ll be more compact by the time we share it with people at the end of the week. I’m excited for other people to get to know Sarah and Jake and find out if everything I think/hope is actually there. I can’t wait.