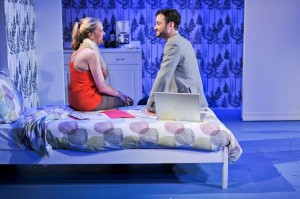 Polly Lee and Teddy Bergman in “The Cloud.”
( Photo by Jenny Anderson)

Slant Theatre Project‘s premiere staging of Matt Moses‘ frisky romantic comedy The Cloud, about lovers and potential lovers navigating their desires in the age of the internet, continues through June 1 at HERE in Manhattan. Moses fielded a few questions about his four-actor play in which text messages come to bright theatrical life.

The 90-minute digital-era farce about mistaken identity, walls, connection, ambition and love is intoxicating, funny, sexy, heartfelt and full of surprise. (The sort of surprises that are difficult to explain here because it would, well, ruin the surprise.)

Moses is an improv and Comedy Central vet known for Abingdon Theatre Company‘s Daniella Uses Dirty Words and as an ensemble member in Upright Citizens Brigade’s The Law Firm. 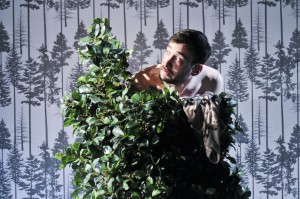 Teddy Bergman in “The Cloud.” ( Photo by Jenny Anderson)

Here’s how Slant bills The Cloud: “Four people get lost in the forest of social media in this raucous farce exploring changing notions of privacy and intimacy in this age of over-sharing. The Cloud fuses the wilds of the internet with Shakespearean romance to conjure a theatrical landscape in which all the www is a stage.”

In The Cloud, “Chris [Teddy Bergman], a set designer, is gunning for a job designing a major production of As You Like It. His girlfriend Katie [Mikaela Feely-Lehmann] is an app designer who gets her first big break with a very revealing app called Show Me Yours. Enter Katie’s ex-boyfriend, Greg [Ryan King], a personal trainer who’s ready to end his philandering and get married, and Greg’s client Sandy [Polly Lee], a career-obsessed costume designer who decides to spice things up by having a fling with a younger man.” 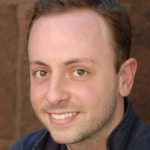 Matt Moses’ play The Bedtrick was produced in translation in Santiago, Chile and will be seen in Caracas, Venezuela at the 2014 Festival of Contemporary U.S. Drama. The Emperor of Ice Cream or Thirteen Ways of Looking at Donald Rumsfeld was produced by the Hangar Theater. Daniella Uses Dirty Words was produced by the Abingdon Theatre Company. Moses has an MFA in playwriting from the Yale School of Drama, where he won the ASCAP Cole Porter Prize. He performs every Friday night at the Upright Citizens Brigade Theatre with The Law Firm.

I’m always curious about the genesis of a play. The first flash of an idea. What came first with The Cloud? Were you interested in the idea of love in the internet age? Did a character first pop out? The situation? The conflict?

Matt Moses: I think the very first spark of an idea came out of thinking about how the internet is truly is a place where a lot of human experience now takes place. And: how do we tell the stories that take place there without making them dramatically inert scenes of people typing? The theatre is the perfect medium in which to dramatize this liminal space. If it’s done on film, you either have to do it with people typing into computers or get specific about what the internet looks like and you end up with “The Matrix,” which is great, but doesn’t work for every story. In theatre we can more easily bend space.

The “doors” of your farce are essentially communication devices — laptops, iPads, phones. “Messages” emerge as characters popping out of the woodwork. Was the idea of a farce, filled with mistaken identity, there from the beginning?

Matt Moses: Yes, that was there from the earliest phase of writing. 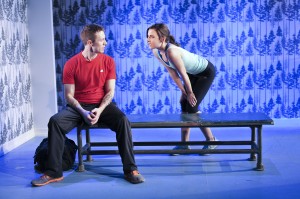 On one level, The Cloud is concerned with a lack of authentic contact between people — a lack of intimacy and natural connection. Is this something that disturbs you, personally, about the internet age? Are we becoming too virtual? How wedded to devices are you?

Throughout history when new technology comes along there have always been dire predictions— “human nature will be changed!” But I’m not sure human nature ever does change due to technology, it just reveals us to ourselves in a new way.

Two of the four characters in your play are theatre people, and a production of As You Like It is referenced in The Cloud. As in As You Like It, your play includes disguised people and misread messages — people who are lost in a (virtual) forest. Was folding in the tension and world of the Shakespeare play on your mind from the beginning?

Matt Moses: I was thinking about Shakespearean comedy of mistaken identity at the earliest stages of writing. How it can often feel hackneyed when staged. “How is it possible that the characters don’t recognize each other?” I thought staging mistaken identity this way would help believability. It really is possible to masquerade as another person if you have their login info.

I was also thinking about the magical Shakespearean forests of A Midsummer Night’s Dream and As You Like It as metaphors for the internet. Transformative places. I went with As You Like It as the play the characters in The Cloud are working on because of its focus on performance. Jaques’ “All the world’s a stage” speech seemed particularly apt when thinking about social media — a medium rife with performance (or at least that’s the way it feels to me). 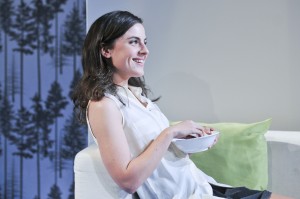 Mikaela Feely-Lehmann in “The Cloud.”
(Photo by Jenny Anderson)

I’m curious to know how performing improv with The Law Firm at Upright Citizens Brigade Theatre informs your writing as a playwright. How do the skills speak to each other?

Matt Moses: The way time and space are often bent during improv shows, as well as the fluidity of its staging, definitely informed the writing of this play. I do think the skills of improvising and playwriting speak to one another. Really, they’re both acting. To me improv is the most theatrical of all formats because it puts the theatre’s most unique strength at its forefront: liveness. As in, “this is being created in front of your eyes, right now.”

Can you share a little bit about the development of The Cloud? Has it gone through readings? Was Slant Theatre Project involved early on? What did director Wes Grantom bring to the table?

Matt Moses: I wrote half a draft of a play a couple years ago that used the theatrical device of “the cloud,” but put the play aside because the characters weren’t working. Then a year or so goes by and I’m doing some writing — just  listening to some characters that turn out to be a set designer and an app developer. I realized that these are the characters that belong in the world of The Cloud and wrote an entirely new play.

After that happened, I gave the play out to a few friends to read. I got some great advice from the dramaturgically astute director Dan Rigazzi and developed the play with him for a bit. Then the play had a reading out in L.A. at the IAMA Theatre Company under the brilliant direction of Becca Wolf, who further guided the play’s development.

After that, the play was picked up by Slant and we developed it together over the last half year or so, when the play had multiple readings.

Wes Grantom is an amazing director. He truly understands comedy and brought a wealth of ideas to the table. I rewrote the play quite a bit during our development process and even more during our rehearsal period. When writing the play I had ideas about how “the cloud” would be theatrically realized but didn’t know precisely how it would work. Wes and the design team did an amazing job of bringing it to life. I was also very lucky to have a great cast of smart actors who helped me refine the play while in rehearsal.

Can you share your earliest theatregoing experiences? You grew up in Brooklyn. What exposure to theatre did you have as a kid?

Matt Moses: I started to see a lot of theatre once I started going to Edward R. Murrow High School. I took a class where we went into the city to see shows. I remember seeing a George C. Wolfe production at the Public, Blade to the Heat by Oliver Mayer. I’d never seen anything so kinetic and alive and just cool. I also got to see Nicky Silver’s The Food Chain. I’d never laughed so hard in my life. That was a big one for me. And also Nathan Lane’s performance in A Funny Thing Happened on the Way to the Forum. Thank you, TDF, for giving us high school kids all those cheap tickets!

When did writing plays become a goal?

Matt Moses: It was also in high school that I started to write plays. I studied with Scott Martin and the very funny playwright Becky Mode at Murrow and then took an advanced playwriting workshop at New Dramatists via Young Playwrights, Inc. Charlie Schulman taught and brought in Alfred Uhry and David Henry Hwang as guests. It was exciting and inspiring.

During that time in high school, classmate and fellow playwright Hillary Miller and I went in to the Union Square Barnes and Noble to hear Wendy Wasserstein speak and got her to sign our copies of The Paris Review Theater Issue.

What did you learn from — or what did you take away from — the Yale MFA playwriting program? How did you grow from it?

Matt Moses: At Yale I was very lucky to study with amazing playwrights like Richard Nelson and Paula Vogel. Not to mention my incredibly talented fellow students from whom I learned a great deal. To have three years to focus all of your energy solely on writing plays was an enormous gift.

One of the key lessons I learned was Richard Nelson’s instructive to “write good scenes.” I’m serious.

Performances began May 16 and continue Tuesday-Saturday at 7 PM; Sundays at 2 PM, plus Saturday, May 31 at 2 PM (no performance on Sunday, May 25). 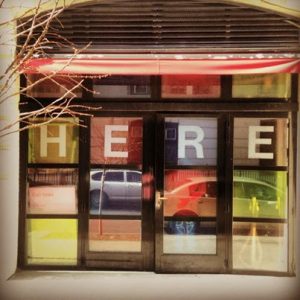 “The Cloud” plays at Off-Off-Broadway’s HERE in Soho.

This production is a part of SubletSeries@HERE, HERE’s curated rental program, which provides artists with subsidized space and equipment, as well as technical support.

Now in its 10th season, Slant Theatre Project “is a group of artists that thrive on the danger of building the plane in flight. We do visceral work. We tailor each process to the artists and performance space, and are committed to creating a playground for emerging theatre artists. Since 2004, we have produced new works by Bekah Brunstetter, Rachel Axler, Marcus Gardley, Michele Lowe, Mat Smart, Adam Rapp, Lisa Kron, Theresa Rebeck, Dan O’Brien, Evan Cabnet and many more.