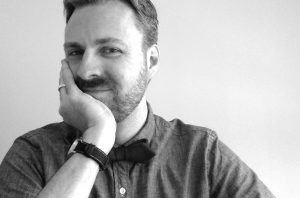 “I wanted to set the play in a run-down liquor store and I wanted to write about ghosts,” the playwright told me in 2015, when the script was in development under the title Speculator Spirits. “But I also wanted to allow the idea of ghosts to include anyone whose best days are behind them and can’t bring themselves to move on. This is even true for the town they live in. With that in mind the characters started to come into focus. And, of course, the conflict comes when we throw in some characters who seem to have no problems moving on.”

Here’s how Crowded Outlet bills the play, being presented in the company’s inaugural year: “In Lone Star Spirits, a trip home gets wildly out of hand when Marley returns to introduce her fiancé to her estranged father. Hoping for a quick visit, she finds herself stranded in a liquor store haunted by her football hero ex-boyfriend, a single mom insistent on a girls’ night out, and the ghost of the bear-wrestling pioneer who founded their town.”

Expect “a comedy about those who leave, those who stay, and raising a glass to the ghosts of your past.” 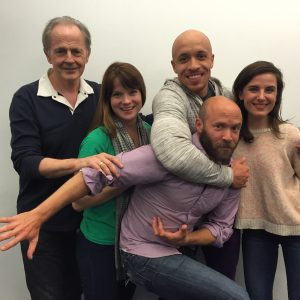 Tobiessen’s play enjoyed previous development under the direction of Grantom (Off-Broadway’s The Steadfast and Eager to Lose) in Pioneer Theatre Company’s Play-by-Play New Play Reading Series in Utah in February 2015 and in summer 2014 with Off-Broadway’s Slant Theatre Project.

Crowded Outlet artistic director Grantom told me, “This play was passed to me by an actor in 2014 after a cold read at the New Harmony Project, where Josh was a writer in residence. I was immediately drawn to the play and Josh and I began looking into development opportunities. This is an exciting play for Crowded Outlet’s first production because, as a multidisciplinary company, we may never do another play like it — a ‘well-made’ comedy, an ensemble play that takes place in one room. It’s a timely comedy that stands out in its genre and it’s truly one of the funniest plays I’ve ever read.”

Lone Star Spirits is one of many initiatives of Crowded Outlet. Check out my earlier piece about the company, which launched in January 2016 with a reading of Jeff Talbott’s Elliot. 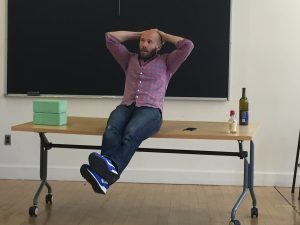 Tobiessen used an undergraduate degree in philosophy and training from the Improv Olympic in Chicago to start writing plays in Ireland with a theatre company he co-founded called Catastrophe. After having several plays — many of them site-specific productions — performed at such venues as the Galway Arts Festival and the Dublin Fringe Festival he returned to the U.S. to get a playwriting MFA at the University of California, San Diego. His recent plays include Election Day (New York Times Critic’s Pick), Red State Blue Grass, Spoon Lake Blues and Crashing the Party. His work has been produced or developed at such places as The Alliance Theatre, Atlanta; Mixed Blood Theatre, Minneapolis; The O’Neill National Playwrights Conference, Connecticut; Oregon Shakespeare Festival, Ashland; Second Stage Theatre, New York; Slant Theatre Project, New York; The Zach Scott Theatre, Austin; and AiShangChu Theatre, Hong Kong.

Crowded Outlet is a not-for-profit development and producing organization “committed to harnessing the creative powers of a variety of artistic voices and theatrical visions.” The organization is run and operated by Wes Grantom (Eager to Lose and The Steadfast) and Chad Goodridge (Passing Strange). Earlier in the year Crowded Outlet developed new work by Jeff Talbott, Zakiyyah Alexander and Matt Dellapina. Throughout the year Crowded Outlet will continue to develop work by the rest of the artists in its Surge Series, including new work by Cori Thomas, Alejandro Rodriguez, Emily Walton, Marisa Michelson, Lauren Whitehead, Polly Lee and Nikko Benson in collaboration with Chad Goodridge, as well as a collaboration between Matt Citron and Carlos Dengler.