“Three Rules for the Dragon,” Jeff Talbott’s New Play About a Suspected Terrorist and a Distracted CIA Agent, Gets NJ Reading June 17-19

Jeff Talbott’s new play Three Rules for the Dragon, about a law enforcement interrogator pulled between his gruesome work and his domestic life, is being investigated in rehearsals toward a public reading by Premiere Stages the week of June 13 in Union, New Jersey. Busy New York City director Wes Grantom directs a cast of four that includes Dashiell Eaves, Christa Scott-Reed, Julian Cihi and Tyrah Skye Odom. Three reading presentations will be presented June 17-19.

“A friend called and tried to sell me on a play based on the Senate Torture Report, because he had read it and was very intrigued,” Talbott told me, sharing the genesis of the play. “And no matter how much he tried, I just couldn’t get on board. So, after about 30 minutes, my friend gave up. But, just as he was giving up, he mentioned some very small incident he read about. He mentioned it in passing. But I couldn’t get it out of my head. So then I had no choice. I read my way through big chunks of that fascinating and terrible document and started taking notes. It wouldn’t let me go.”

The title would become a finalist in the 2016 O’Neill National Playwrights Conference. 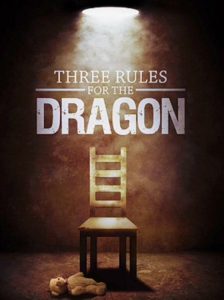 Poster art for Premiere Stages’ reading of “Three Rules for the Dragon.”

Here’s how Premiere Stages bills Three Rules for the Dragon: “In this provocative and unabashedly theatrical new play, Douglas Barnes [played by Dashiell Eaves] is having difficulty balancing his top secret job and his crumbling home life. As he struggles to extract information from a suspected terrorist [played by Julian Cihi], he must also try to salvage a marriage [Christa Scott-Reed plays the wife] that hangs in the balance.” Tyrah Skye Odom plays the agent’s daughter.

Premiere Stages is celebrating its 12th year as the professional theatre in residence at Kean University. John J. Wooten is the producing artistic director. Three Rules for the Dragon was seen earlier this year in a reading by Premiere Stages and now enjoys this expanded workshop.

I asked Talbott what he first “saw” when conjuring Three Rules for the Dragon. A character? A place? A conflict? “For this play, I saw an image,” he said. “I saw a man tied to a chair, sitting with a little girl, having a tea party. And I built out from there.” 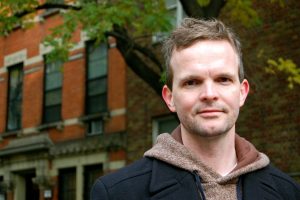 Dashiell Eaves plays a conflicted interrogator in the reading of “Three Rules for the Dragon.”

Innocence is a recurring idea in the play. Was he aware of this as a theme, or did the characters lead him toward themes and ideas? “I definitely get led by the characters, not the ideas,” Talbott said. “The themes emerge as the characters experience them, and then I try to shape the play to support the ideas, but only insofar as they serve the characters. This is a play about two men and a family. Everything else, even the more provocative stuff, is just stuff.  When in doubt, I always look at the people in the play and ask, ‘What are they feeling? What do they want?’ It’s the only way.” 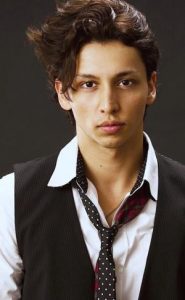 Julian Cihi plays an alleged terrorist in the reading of “Three Rules for the Dragon.”

Jeff Talbott is a past recipient of the Laurents/Hatcher Award and Outer Critics Circle John Gassner Award for his Off-Broadway hit The Submission. It’s a busy month for the playwright: His play How to Build a City will be read in the NewTACTics Festival of New Plays in New York City June 22-23. Wes Grantom — artistic director of the new theatre company Crowded Outlet, which is currently producing the world premiere of the well-reviewed Lone Star Spirits — will also direct for NewTACTics.

As one of four finalists featured in Premiere’s popular Spring Reading Series in March, the title was named this year’s runner-up in the Premiere Stages Play Festival, ushering it toward this expanded development in June. The reading performances are at the Murphy Dunn Theatre in Vaughn Eames Hall, 1000 Morris Avenue, on the campus of Kean University in Union, NJ. The free readings are 8 PM June 17, 8 PM June 18 and 3 PM June 19.

For reservations and more information, call 908-737-SHOW (7469) or visit www.kean.edu/premierestages. If you’d like more information on the Premiere Stages season programming or talk-back schedule and speakers, email premiere@kean.edu.