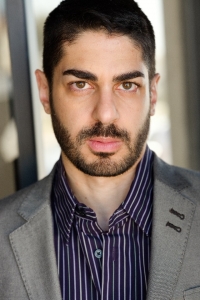 Playwright Victor Lesniewski draws on his tech background — an engineering degree and a job in network security and cryptography — for his new play, The Fifth Domain, which is enjoying development this month in Pioneer Theatre Company’s Play-by-Play New Play Reading Series. Kareem Fahmy directs the four-actor drama, which gets public staged readings Jan. 25-26 in Salt Lake City.

I asked the writer, “What sparked the play — a character, a conflict, a place?”

“It wasn’t so much a spark this time as people in the theater industry wearing me down,” Lesniewski explained. “For a long time I had to hear variants of ‘When are you going to write the play that uses all the knowledge from your tech background?’ It was only recently, given current events, that I thought a play of this type that I would write might appeal to a theater audience. Even so, it’s a wild ride of a play and the public readings here at Pioneer will really be informative to me in determining whether people can handle it.”

He added, “I’ve been referring to the play as ‘my cyber espionage play’ as I often find myself eschewing titles when talking about my own work. Essentially, we’re in the world of high-level NSA agents and rogue hackers. It’s cyber espionage on a very global, nation vs. nation scale.”

Los Angeles-based Lesniewski answered a handful of my questions. Check out the Q&A below. 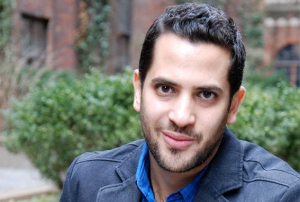 Raised by Egyptian immigrants in French-speaking Canada, Pioneer guest director Kareem Fahmy is a director, playwright, and developer of new work. His recent world premiere productions, including 3/Fifths, This Time and Couriers and Contrabands, have received widespread critical acclaim. He is a 2017-2018 National Directors Fellow and the current Phil Killian Directing Fellow at Oregon Shakespeare Festival. He holds an MFA in theatre directing from Columbia University.

Here’s how Pioneer bills the new play: “Timely and topical, The Fifth Domain centers on Troy, a cyber security expert, recently removed from his position at the National Security Agency. When he is approached about a new project requiring his special skills, Troy’s eagerness to take on the work blinds him to the repercussions in the world of cyber war. A thriller that asks basic questions about patriotism, espionage and accountability in the digital age.”

I first met Victor in 2017 at Wyoming Theater Festival, where his Tentative City — an ensemble play about denizens of a tent city in America — and my play Hollywood, Nebraska were developed, along with others. Here’s my chat with him about The Fifth Domain.

The Fifth Domain exists in the world of cyber security, secrets and spying. Have recent reports about Edward Snowden, Wikileaks, espionage and national security specifically informed the play?

Victor Lesniewski: Yes and no. The main character is sort of Snowden-esque. The play isn’t about Snowden, but the characters refer to him and the motivations pick up the thread of government and corporate accountability that were also part of that real-life story.

To your mind, what questions does the play ask underneath the characters and the action? Obviously, an audience may sense different questions or themes.

Victor Lesniewski: I hope the audience comes away thinking about and discussing big ideas like: How do we go about holding our government accountable for the way they operate in the cyber world? How can we better understand the way our government interfaces with major corporations when it comes to security? Where are the lines of patriotism and service for government agencies vis-a-vis their commitments to the private sector?

And speaking of themes, do you go into a writing project mindful of “theme,” or does that surface later? I guess this speaks to what comes first in your process: world, character, subject, conflict?

Victor Lesniewski: I’m not quite sure what usually comes first. I don’t think I commit to the idea that I have something that needs to be written until I have all of those things, no matter what order they occur in. But theme is always there. I find I’m usually writing characters vs. a world, in a variety of ways, so the characters always have big ideas they want to toss about.

What does the title refer to, or is it a secret?

Victor Lesniewski: No, it’s actually very literal. Cyberspace is the fifth domain of warfare, as defined by our government and other nations: Land. Sea. Air. Space. Cyber. 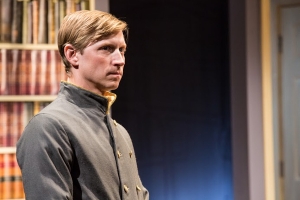 Share a little of your history with director Kareem Fahmy. What makes you two a fit?

Victor Lesniewski: I could talk for days on this topic and not run out of positive things to say about Kareem and our collaboration. We’ve developed two plays together from the ground up. Although I wrote them both, we collaborated in exploratory workshops with actors pre-script in what we call a discovery process. So, not creating material for the script, but really digging into the world of what the play will be and seeing which ideas of ours and which themes really catch fire. Then post-first draft we go into a more traditional workshop process to support rewriting and development. My play Couriers and Contrabands was initially supported by New York Theatre Workshop via a fellowship of Kareem’s and was later produced in New York City to critical acclaim. Khardal was developed with support from The Ground Floor program at Berkeley Rep. Because we have such a great shorthand — and because I find Kareem to be a truly selfless collaborator dedicated to telling the story of the play in the best way possible — I often share my other work with him, even if we haven’t developed it together. It’s always great to have a director in the room who you know so well. In the case of The Fifth Domain, he passed the script to the folks at Pioneer, so his relationship with the theatre was my way into this workshop.

Is there something in particular you wish to accomplish or listen for in Salt Lake City?

Victor Lesniewski: Oh, so much. This is the first real workshop for the play and the first time it will be heard by an audience. The play is tech-heavy, so I’ll have an ear out for what of that doesn’t land. But also, it’s a thriller and there is just so much going on in terms of plot machinations. It’s going to be interesting to see whether or not that aspect of the play works for the audience.

How is The Fifth Domain different from or similar to your other plays?

Victor Lesniewski: It’s totally different in the amount of tech-speak, but similar in terms of taking on big issues that I’d like to see more discourse about. I don’t think I write “issue plays” in that I never set out to tell an audience how I think a certain issue should be solved. But I do try to examine, from all angles, larger ideas. Khardal is about the beginning of the Syrian Civil War. Where Bison Run is about the political situation in Belarus. There are exceptions of course. Cold Spring, which was just at Ashland New Plays Festival this fall, is about the ramifications of a sexual assault accusation on a close-knit community. Although it certainly has large ideas, the plot turns much more on the nuances of the interpersonal relationships than in some of my other plays.

You grew up in Connecticut. What was your first exposure to theater, and can you see a direct line from that experience to you sitting down to write plays?

Victor Lesniewski: One the most impactful theatrical moments of my youth was a high school outing to Doug Hughes’ production of David Rabe’s A Question of Mercy at Long Wharf Theatre. It’s a beautiful play that examines euthanasia without offering any easy answers. I think it was the first moment when I said, “Oh, theater can do that?” Yes, it can.

Did you come to playwriting via acting or other theater-making?

Victor Lesniewski: Not really. I built sets in high school and I’ve acted a little here and there. I really enjoy acting, but I was never motivated to make any kind of a real go at it. Playwriting became my creative outlet when I was doing my engineering degree and eventually, when I was still doing it years later, I realized how passionate I was about it.

Share a little about your educational pedigree and the primary “takeaway” from school? What sticks with you?

Victor Lesniewski: I really loved Calculus in 3D, though I don’t remember a thing. Oh, you probably mean my MFA [from the New School of Drama]. School really prepared me for having no time to write. It was a different type of constraint because I was writing about five different things at a time, but there was never the amount of time needed to really focus. And now, with the real world and a day job in the way, at least I feel like I learned how to carve out time, and how to be productive when time is scarce.

Can you share a little about your writing habits? Do you write daily, in spite of your day job?

Victor Lesniewski: I really envy those writers who can write every day. I get a few good days a month. When I need an extra day I find it, but that’s about it. Sometimes I feel looked down upon by people in the theater industry for the fact that I have a consistent day job, like my work is somehow worth less because I’m not either starving or in possession of a trust fund, but I don’t have any other means of survival. Believe me, if I could be writing more I would be.

We first met at Wyoming Theater Festival in 2017, when your play Tentative City got a reading in partnership with Roundabout’s Space Jam program. Did you learn something specific about the play there that led you to rewrites? What’s the status of the play?

Victor Lesniewski: Yes, definitely. I wrote the first draft of the play there (thank you, Roundabout and WyoTF!) and given the size of that piece it was absolutely necessary that I was isolated and was able to string a few consecutive days together in which to write. I’ve been continuing to fine-tune the play ever since, mostly ensuring that each of the nine characters has a dynamic, interesting arc. It’s going to be a really fun play for actors, I think. There are a lot of big, charismatic characters. The play actually has a reading coming up Feb. 11 at San Francisco Playhouse. Come check it out if you’re in the Bay Area!

This is the sixth season of Pioneer Theatre Company’s Play-by-Play New Play Reading Series, which gave developmental life to several plays that went on to regional success. The first breakout of the series was Kenneth Jones’ Alabama Story, which, under the direction of PTC artistic director Karen Azenberg, appeared in the inaugural Play-by-Play season in 2014. In 2015, PTC produced it on the mainstage to acclaim. By spring 2019, it will have played more the 20 productions around the nation.

Sarah Bierstock’s Honor Killing, also developed in Play-by-Play, has been seen in several productions, including a world premiere by Florida Studio Theatre.

Jeff Talbott’s four-actor drama i was read in Play-by-Play in 2017 and was later produced to acclaim on the PTC mainstage in 2018.