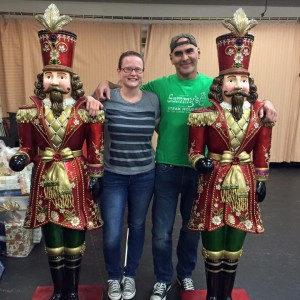 Production stage manager Mary Costello and cast member Howard Kaye flanked by yule friends in the rehearsal room for “It Happened One Christmas.”

Over at Utah’s Pioneer Theatre Company, it’s beginning to look at lot like — oh, you know. Rehearsals begin Nov. 9 for the world premiere of It Happened One Christmas, a new holiday concert revue handcrafted for Salt Lake City audiences by co-conceivers Karen Azenberg and Kenneth Jones. Performances play Dec. 4-19.

PTC artistic director Azenberg directs and choreographs the grab-bag concert entertainment of classic and contemporary holiday songs and iconic spoken material, all tied together with an original context that embraces the world of the theatre. Tom Griffin is the musical director.

Azenberg and playwright Jones previously worked together on the Pioneer world premiere of Jones’ play Alabama Story in January 2015. The acclaimed production became the highest-grossing new play in the history of Pioneer, the major resident Equity theatre in Utah. (Alabama Story will see at least two regional Equity productions in 2016, including its Southern premiere at Florida Studio Theatre and a run at one of the oldest summer theatres in the U.S., in Wisconsin.) 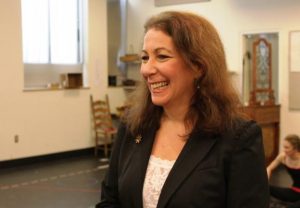 “Karen approached me about helping her conjure up an original holiday show especially created for Utah audiences,” the playwright says. “Her one direction at the start was: ‘I see a bare stage, and I want it to come alive with Christmas.’ I suggested we set the show in a dusty old theatre that’s now in disuse after a century. We had a blast filling in what was blank and borrowing timeless, beloved yule material — spoken and sung — from across the decades.”

Here’s how PTC characterizes the two-act musical extravaganza: “In an abandoned vaudeville theatre in downtown Salt Lake City, we learn of a legend that says if Salt Lake City has snow on Christmas, it’s because of what happens in that theatre. They say that every Christmas Eve, ever since this theatre shut down, the Ghosts of Past Shows reappear here for a midnight frolic — a revue, a concert — to relive their heyday, to celebrate the season and to urge Father Christmas to cover the world with snow. If Santa Claus approves of this show, the city gets some of that fabled white stuff.” 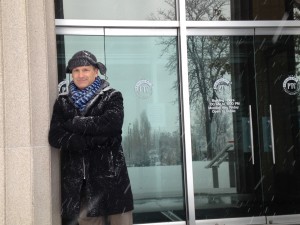 Kenneth Jones on the steps of Pioneer Theatre during the 2104 Christmas Day snowstorm in Salt Lake City. (The day off from rehearsals for “Alabama Story.”)

Jones added, “I have a special connection to Christmas in Salt Lake City. We were rehearsing Alabama Story over the Christmas holiday last year, and we had a thick snowfall on Christmas morning. It was a day off for the cast and we wandered the quiet campus, a true winter wonderland.”

Performances play Mondays-Thursdays at 7:30 PM, Fridays and Saturdays at 8 PM and Saturday matinees at 2 PM.

PTC presents at the 900-seat Simmons Pioneer Memorial Theatre, 300 South 1400 East, on the campus of the University of Utah in Salt Lake City. Visit www.pioneertheatre.org.

It Happened One Christmas is not to be confused with Naughty/Nice,  the comic, profane, grown-up musical comedy revue that Jones co-wrote with composer Gerald Stockstill. It was just published by StageRights.com following a sold-out concert presentation at Caroline’s On Broadway.  Hear the brilliant Sally Wilfert sing a number from Naughty/Nice.