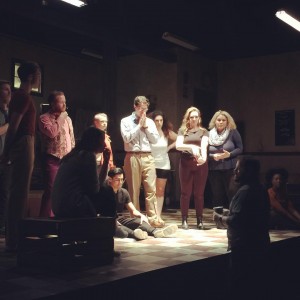 Director Wes Grantom with the world-premiere cast of “Civics and Humanities for Non-Majors” at Montclair State University.

Civics and Humanities for Non-Majors, the new play by Jeff Talbott teeming with college-age characters trying to form student organizations in two eras, in 1976 and 2016, gets its world premiere April 18-22 as the inaugural commission in The New Works Initiative (NWI) at Montclair State University in New Jersey. Visiting guest director Wes Grantom has been working on campus with Talbott and an ensemble of undergrad actors, technicians and designers.

The commissioned script, which had a developmental workshop reading with MSU students in fall 2017 and has undergone revisions since that time and during recent rehearsals, is also a 2018 finalist in the O’Neill Theater Center’s National Playwrights Conference.

Here’s how the 12-actor intermissionless play is billed: “People got it together to write the Constitution, so why can’t two student action groups get a single sentence on paper to form a charter? Finding the right words can be the hardest thing in the world. Two stories. One story. Their story. Our story. A thorny comic drama about getting things started.” 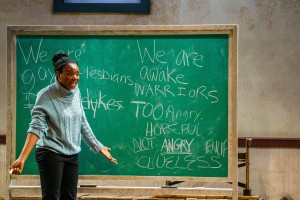 Kira Player in “Civics and Humanities for Non-Majors.” (Photo by John Behlmann)

NWI’s mission is “to bring together established and emerging playwrights, composers, choreographers, theatre-makers, and professional directors with MSU theatre students to explore adventurous theatrical works.” The artist-in-residence program/developmental platform is part of the Department of Theatre and Dance in Montclair State University’s College of the Arts.

In a world where theaters seek economically feasible small-cast plays, Talbott jumped at the chance to write a play for a large ensemble. For the NWI commission, he was tasked with writing for a cast of 11-15 actors. He landed on 12. 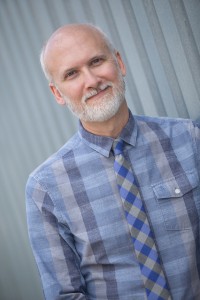 Talbott told me, “As a writer of contemporary plays, we are often encouraged to dream big but think small — big ideas told with only a few people. Being given the chance to actually explore big ideas on a large-cast canvas is a shockingly hard exercise when you haven’t been able to do it. I was initially overwhelmed by twelve voices fighting for space in a story, but once I gave in to it, it was thrilling.” 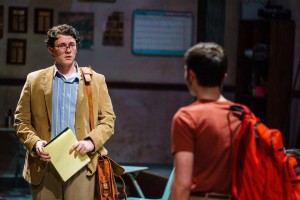 Thomas Short and Brian Sedita in “Civics and Humanities for Non-Majors.” (Photo by John Behlmann)

How did Talbott navigate the thicket of a dozen characters? “The challenge was to make sure they not only each got their due, but that they got their due with their own individual voices,” he said. “I won’t lie — early drafts of this play felt chaotic to me; but working with my frequent collaborator and laser-eyed friend Wes Grantom allowed me to lean on somebody smarter than me to keep nudging me towards clarity. And having the luxury of building those 12 characters on a dozen spectacular emerging artists (and humans) has been the biggest gift of all.”

Montclair’s New Works Initiative further characterizes Civics and Humanities for Non-Majors this way: “This adventurous new play dives into campus life in two different times — 2016, days before the presidential election, and 1976 — as two student-formed political action groups attempt to draft by-laws. Conflicts arise as they discover that defining a governing identity within any group requires more than patience; it may just require a miracle. With humor and crackling dialogue, the play tackles what may be today’s biggest question: Is it possible to find common ground when no one seems to be listening?” 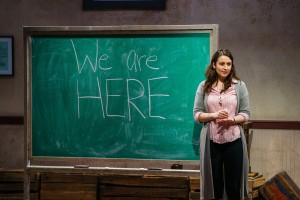 Brooke Garfinkel in “Civics and Humanities for Non-Majors.” (Photo by John Behlmann)

Talbott explained, “I have always been fascinated by documents of governance; not what they say, but how they came to be. How does a group of people ever agree to write down anything? It seems like an impossible task — each new person means a new agenda. Or agendas. So it seemed like a good fit for a commissioned work that was designed to be written for a larger cast. Of course, because I’m an idiot, I decided to deal with two completely different groups drafting two different documents on stage at the same time, but in two different time periods. But the challenge I created for myself only ultimately increased the fun of trying to accomplish it.” 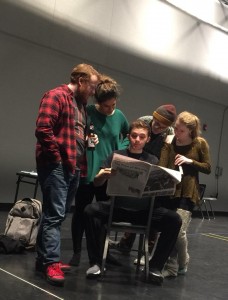 How much has changed since early drafts, and did these kids inspire changes?

Talbott said, “This play has been radically rewritten from scratch four or five times. The basic skeleton has remained the same, but almost every detail has changed over and over. After our first rehearsal for the production (after already having had a four-week workshop), Wes and I just talked to the students for 90 minutes about the issues in the play — issues surrounding being a first-time voter in 2016, of being gay, of being an emerging human being in a troubled time. As we were leaving that day, I said to Wes, ‘That was better than the play.’ And Wes said. ‘Jeff, that was better than any play. Put all of that in.’ So I did.”

Talbott and Grantom, artistic director of Crowded Outlet, have collaborated before on developmental readings of Talbott’s i, How To Build a City, A Public Education, Eliott and Three Rules for the Dragon. Talbott’s 2017 Of-Broadway play The Gravedigger’s Lullaby was recently published by Dramatic Publishing. Pioneer Theatre Company just gave Talbott’s i its world premiere in February 2018. He is working on several new musicals with composer Will Van Dyke. Talbott’s The Submission won the inaugural Laurents Hatcher Foundation Playwriting Award and was produced by MCC Theater and is published by Samuel French.

The New Works Initiative is made possible through the support of Bob and Holly Gregory.