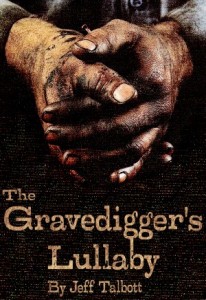 Cover art for Dramatic Publishing’s edition of “The Gravedigger’s Lullaby.”

Jeff Talbott’s The Gravedigger’s Lullaby, the new four-actor drama about hardscrabble lives and an opportunity to crawl out of the dirt, has been published by Dramatic Publishing and is now available for worldwide licensing following its Off-Broadway world premiere last season.

Learn more information and get a perusal copy of the play here.

Here’s how Dramatic Publishing bills The Gravedigger’s Lullaby: “Baylen is a gravedigger, a working-class man trying to keep food on the table in a world where other people make the rules. His wife, Margot, helps to make ends meet by doing laundry, but they’re slipping further behind with each passing minute. The extremity of their situation is being further challenged by the new baby who cries and cries, night and day. But still Baylen goes on, digging one hole at a time for the pennies he brings home, trying to keep his family afloat. His workdays are spent with his best friend and fellow gravedigger, Gizzer, the little brother he never had. He seems trapped, but he’s making the best of it. A chance encounter with Charles Timmens, a rich young man, brings the possibility of changing everything, though. Is a better life possible? If Baylen can keep his mouth shut and not challenge the young man’s opinions about money and happiness, maybe it is. But keeping his mouth shut has never been Baylen’s strong suit. And if he can’t, the next hole he digs may be his own. Torn between his struggle to bring home more money and find some peace in a home that is never quiet, Baylen is pushed to the edge and very possibly over it. The Gravedigger’s Lullaby is a bold and gripping contemporary drama about a time that has passed. And how little things have changed.” 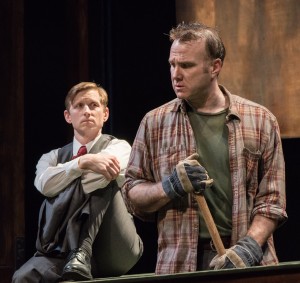 Jeremy Beck and Ted Koch in “The Gravedigger’s Lullaby.” (Photo by Marielle Solan)

Talbott’s latest play, i, opens in its world premiere run Feb. 16 at Pioneer Theatre Company in Salt Lake City. Montclair State University will premiere a play commissioned from Talbott this spring: Civics and Humanities for Non-Majors will run April 18-22 as part of MSU’s New Works Initiative.

Talbott won the Outer Critics Circle’s John Gassner Award and Laurents/Hatcher Foundation Award for his play The Submission, premiered by MCC Theater and seen in independent productions across the nation.

“The very first thing that came to me was an image: a rich man and a poor man sitting side by side, feet dangling, looking out, eating apples,” Talbott said of The Gravediggger’s Lullaby in 2015. “I had been toying with writing something about the wealth gap, but had no desire — and have no desire — to write something overtly political, so any notes I had taken seemed like starting points for plays that had either been seen or that I did not want to see. Then, one day, that image came to me, and I knew it was a departure point for something.” 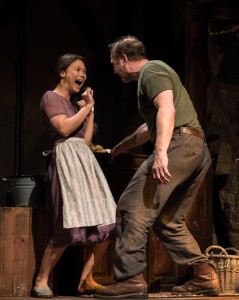 K.K. Moggie and Ted Koch in “The Gravedigger’s Lullaby.” (Photo by Marielle Solan)

Check out my 2015 Q&A with Talbott on the topic of The Gravedigger’s Lullaby, which was first seen in a reading in the NewTACTics festival.

Jeff Talbott’s Three Rules for the Dragon and A Public Education were both finalists for the O’Neill Playwrights Conference and the former received a workshop in June 2016 at Premiere Stages in New Jersey.  His other plays (i, Elliot, All the Stars in the Midnight Sky and How to Build a City) have received workshops and readings at MCC Theater, Chicago Shakespeare Theater, Pioneer Theatre Company, TACT, Crowded Outlet and Route 66. He writes musicals with composer Will Van Dyke. Their work includes Imagine Harry (2015 NAMT Festival of New Musicals), Wintersong (Goodspeed’s 2016 Johnny Mercer Writers Colony) and the just-completed Seven Broken Hearts and the in-development The Circle. They have released an EP (“A View of the River”) and a single (“A New Year,” recorded by Annaleigh Ashford), both available on iTunes or wherever digital music is sold. As an actor, he graduated with honors from the Yale School of Drama. Visit jefftalbott.com.