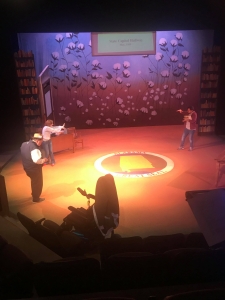 Of the many gratifying experiences I’ve had witnessing the regional life of my play Alabama Story since 2015, I’m uniquely touched by the college and high school productions that have surfaced. I love that kids are using their hearts and minds to create characters that are new to the American theater, and that a younger generation is learning about this singular censorship and Civil Rights story. The latest college staging, at Henderson State University in Arkadelphia, Arkansas, Feb. 20-28, 2020, mixes students with one professor to tell the fact-inspired social justice tale of a librarian persecuted by segregationists. Faculty member William G. Henshaw directs at Arkansas Hall Studio Theatre.

Meanwhile, at Massaponax High School in Virginia, a large-cast cutting of the play by theater adviser Kimberly Kemp won the 6B Super Regional Tournament of the Virginia High School League (VHSL) on Feb. 15. It moves to the VHSL State Championships Festival in Charlottesville, Virginia on March 7. David Smetek, who plays Senator Higgins, received an all-star award at the Virginia Theatre Association competition. The show also placed top six out of 50 schools. In January, Smetek won the top place for acting again, while Gabriela Melendez (playing librarian Emily Reed) was second. Three additional actors were also in the running for placement. Kemp told me, “Unfortunately, they only select four kids…but they were still happy to have their work recognized.” 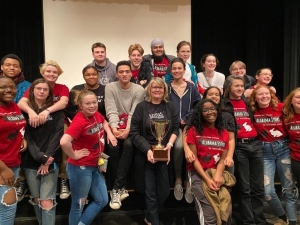 You can learn more about the background and history of Alabama Story here.

This college production hews to the original six-actor version of the script seen at professional theaters, while the Massaponax cutting expands the cast, as was the case when Columbia High School presented it in Maplewood, NJ. The University of Detroit Mercy production in 2016 was given permission to expand the protean track of Garth Williams, allowing additional students to play roles. The play was performed in its original version in 2019 at Frostburg State University in Maryland. 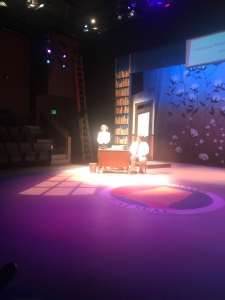 “Alabama Story” in rehearsal at Henderson State University in Arkansas.

Here’s how Henderson State University Theatre bills Alabama Story: “The state librarian of Alabama finds her life and livelihood at risk when a controversial children’s book crosses her desk in 1959 Montgomery. The innocent tale of a white rabbit marrying a black rabbit is angering segregationist politicians as the civil rights movement is blossoming. But will Emily Reed give in to demands to have the book burned? Meet history’s forgotten hero of free expression in the fact-inspired, highly theatrical new American play brimming with humor, heartbreak and hope.”

Also in 2020, Alabama Story will have productions at the Abraham Lincoln Presidential Library and Museum in Springfield, Illinois, in May, and at Cumberland County Playhouse in Crossville, Tennessee, in the fall.

Ask for a perusal copy of Alabama Story here.