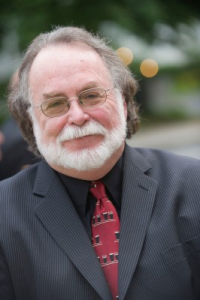 Artistic director Julianne Boyd directs John Cariani and Paige Davis as rare fictional characters from the pen of St. Germain, whose works include Camping With Henry and Tom (about Henry Ford and Thomas Edison), Freud’s Last Session (which also featured C.S. Lewis as a character), Becoming Dr. Ruth and Scott & Hem in the Garden of Allah (featuring novelists Hemingway and F. Scott Fitzgerald).

“There is a tremendous amount of research in most of my plays,” St. Germain told me by email from the Berkshires, in between rehearsals and performances. “Dancing Lessons required so much less, because I didn’t need to read dozens of biographies or history books to feel comfortable, just enough to understand — or think I did — the characters. Talking with people and learning their experiences helped tremendously.” 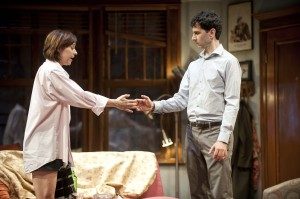 Cariani, a Tony Award nominee for playing Motel in Broadway’s Fiddler on the Roof (2004) — and recent star of the Off-Broadway revival of his own regionally popular play Almost, Maine — plays Ever, a high-functioning man on the autism spectrum who seeks dancing lessons from an injured Broadway dancer named Senga, played by Davis (Broadway’s Chicago and TV’s “Trading Spaces”).

“I spoke with professionals working [in the autism community] and autistic men and women themselves, getting feedback,” St. Germain said. “The same with dancers.”

What first inspired Dancing Lessons? St. Germain said that he met a father and his autistic son years ago, when the son “was not communicative at all.” He explained, “The father and his wife worked hard to be sure their son found the best schools and help with his autism. Two years ago I saw them on the street and it was wonderful to see how personable the son was — excited and full of life and friendliness. We spoke about his new job — and then he told me my birthday and [referred to] the conversations at the table when I thought he wasn’t listening as a child.” 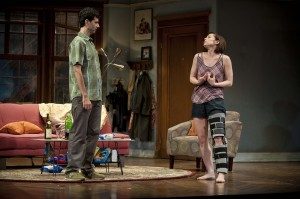 In the play, Ever, who lives with Asperger Syndrome, “is a professor of Geoscience about to be honored at a banquet followed by a dance,” St. Germain said of the New York City-set play. “He’s never danced before and asks a Broadway dancer in his apartment building to teach him to dance just one dance. The problem is, he hates to be touched.”

The play had three readings prior to the current full production of Dancing Lessons: in summer 2013 at Barrington Stage, in New York City and again in the Berkshires. “Rewrites continually, even up to yesterday,” he said on Aug. 11, two days before opening night.

I asked about St. Germain’s early theatregoing life. “I grew up in New Jersey in the shadows of what would be Giants Stadium with a view of the New York City skyline from my back yard,” he said. “My grandparents took me to see Mame — my first Broadway show. I loved theatre but thought there were some Godlike people from the planet Thespis who wrote and acted in it. I would hop on the 101 bus from Lyndhurst, New Jersey, by myself and get standing room in the back of Broadway houses for the cost of a movie. A very valuable learning experience was getting to see hundreds of plays, reviewing them in college and grad school.” 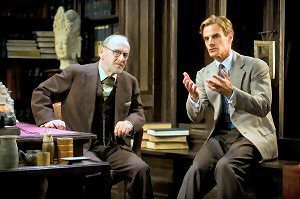 For the record, BSC presented the world premiere productions of St. Germain’s Scott & Hem in the Garden of Allah; Dr. Ruth, All the Way (later retitled Becoming Dr. Ruth); The Best of Enemies; Freud’s Last Session; The God Committee; Ears on a Beatle and Ciao!, plus the 2006 production of The Collyer Brothers at Home & Period Piece. He has also written Forgiving Typhoid Mary, the musical comedy The Fabulous Lipitones (with John Markus) and (with Randy Courts) the musicals The Gifts of the Magi, Johnny Pye and Jack’s Holiday. He is a board member and associate artist at BSC. The BSC Stage 2 is named after him — the St. Germain Stage.

What are the conversations like between St. Germain and BSC artistic director Boyd?

“I wish every writer had a Julie Boyd and Barrington Stage in their lives,” the playwright said. “I share whatever I’m interested in working on with Julie. She’s been incredibly receptive and incredibly honest in what she’s not interested in. Those projects I work on other places. We discuss plays regularly and though we can disagree I think we’re on the same page so far as what interests us.”

The dramatist shared kernels of information about his next plays: “I have three going right now. Subjects: Einstein, Hoffa and Tarzan.” 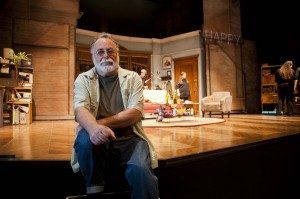 Barrington Stage will host a Sensory-Friendly Performance of Dancing Lessons on Saturday, Aug. 16 at 2 PM.

Please read my earlier interview with playwright Deanna Jent, whose autism-related Off-Broadway and regional play Falling was based on her own experience as the mother of a son with severe autism.