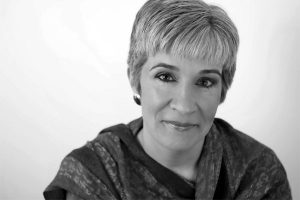 A family’s equilibrium is tested by the unpredictable nature of a teenage son with severe autism in Deanna Jent’s drama Falling, which has returned to its place of birth — Mustard Seed Theatre in St. Louis — for a revival continuing to May 4, 2014, following an Off-Broadway run and resident productions in Los Angeles and Metro Detroit.

The title was published by Dramatists Play Service following its 2012 New York City engagement, for which it snagged a Drama Desk Award nomination for Best New Play.

You know the old saying “write what you know”? Playwright Jent, Mustard Seed’s artistic director, knows the territory of autism — her son, Andy, similarly falls on the spectrum.

So, how much is Falling based on reality? “Everything in this play is true,” Jent says. “It may not have all happened at my house, however.” 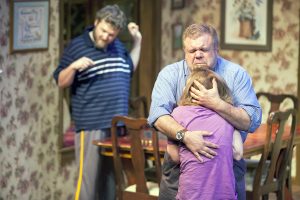 The St. Louis playwright and educator says her goal was not an autobiographical work, nor did she want to pen a dry “issue” play about the disorder that the Autism Society reports affects as many as 1.5 million Americans (and many more family members). Jent sought to show the day-to-day experience — “one that isn’t movie-friendly” — that many families face.

“The play is not really about autism,” Jent explains. “It’s about loving someone who is hard to love…”

In Falling, a visit by his grandmother upsets the routine of 18-year-old Josh, prompting erratic behavior — including the threat of violence — that sends shockwaves through three generations of the household. Josh’s mom, Tami, is the center of the play, but her husband and daughter are in the trenches, too.

Jent says that she and Tami share the same primary urge: “How can I keep my loved ones safe and happy when it seems impossible to keep them all safe and happy?”

The family’s scramble to create structure and routine for Josh and themselves includes directing him to a box of feathers that is mounted on the wall. In times of crisis, Josh is able to release the feathers, which gently float down around him, neutralizing him into a spasm of childish giggles. 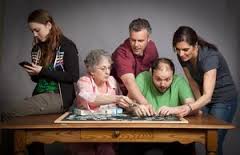 The Meadow Brook Theatre cast of “Falling” in Michigan.

“A detailed calendar is central to life at our house, just as it is in the play,” Jent says. “We don’t have a ‘feather box’ at my house. It [was] created out of memories of my son Andy throwing many things in the air — Cheerios, house plants, Scrabble pieces — because he loved to watch them fall to the ground.”

The feathers help Josh remain “safe from unpredictable and scary auditory stimulation,” Jent says. “The exciting thing about the feathers falling is that while he knows they’re going to fall, there is a variety each time it happens.”

The falling feathers are also highly theatrical, visually, and there can be multiple interpretations of their meaning by play’s end. The script is full of magical surprises that won’t be given away here.

At audience talkbacks for the play during its St. Louis premiere in 2011 and Off-Broadway run in 2012, theatergoers whose families have been touched by autism expressed tearful gratitude that the grinding challenges and buoyant triumphs of their home life were getting a respectful, authentic — and even frank — voice on stage.

Talkbacks with local autism professionals in productions around the country give voice to a community underexposed. Jent herself appeared at talkbacks during the recent Meadow Brook Theatre run in Rochester, MI.

Travis Walter, artistic director of Meadow Brook, says, “My goal was always to spread awareness about autism and the need for programs, research, and help for families, but I didn’t realize how completely the audiences would open their hearts and accept this family on stage into their own. We received standing ovations every night, which is a rarity, and the audience frequently stayed around in the lobby for a good 40 minutes to talk about autism, share their own stories, and find out ways that they could help in the community. It truly was a rewarding production. Word of mouth in the community was a big seller for the show, as it’s a hard show to market.  Many people who were buying tickets had told us that they had heard about the show from someone who had already seen it.” 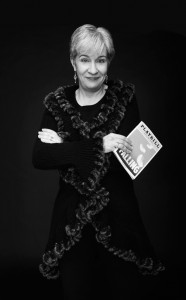 Of the script’s creation, Jent confesses, “It’s a piece that I had started writing many years earlier but had hit a dead end. Then I started to write a non-fiction essay about parenting a teen son with severe autism, but it kept turning into dialogue. Strangely, I was resistant to writing a play, but when I finally granted myself permission to write a play that wasn’t my life — but drew upon my life — it wrote itself pretty quickly.”

Writing about family and our most intimate challenges can be painful. What did Jent’s husband and family think about her venture? Did they know what she was writing step by step, or did she drop a script in their laps?

She explains, “Once I finished a first draft of the play and got some positive feedback, I talked with my family and said, ‘If this gets read or produced, people will think it’s our life on stage. We will know what pieces are and aren’t, but I need to know it’s O.K. to show some of our realities onstage. They agreed that I should keep writing, and I promised to show them the script as it went along.”

The mission of Mustard Seed Theatre, operating on the campus of Fontbonne University in Missouri, is to produce plays about faith and social justice. The troupe was founded in 2007. Artistic director Jent says, “We’ve accidentally grown into an incubator for new plays! Three of our four productions next season are world premieres, two by St. Louis playwrights!”

The Human Terrain, by Jennifer Sue Blackmer, directed by Lori Adams, Aug. 29-Sept. 14, 2014: “This new play chronicles the treasonous friendship between a female American Army consultant and an Iraqi woman, raising questions about loyalty during a time of war.” 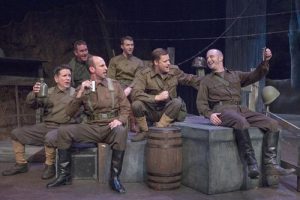 All Is Calm: The Christmas Truce of 1914, by Peter Rothstein, musical arrangements by Erick Lichte and Timothy C. Takach, directed by Deanna Jent, Nov.14-Dec. 14, 2014: “This a cappella musical tells the story of soldiers during the first Christmas of World War I that laid down their arms to sing Christmas carols — creating a night of peace in the midst of war. All Is Calm was produced by Mustard Seed Theatre in November of 2013 to sold out houses.”

White to Gray, by playwright-actor Rob Maesaka, directed by Deanna Jent, Feb. 6-27, 2015: “A cruise ship leaves from Pearl Harbor on December 6, 1941 carrying a Japanese-American woman and her former lover, a Caucasian man from a Navy family.  The couple reconciles on the journey, but the Japanese-American passengers are put under house arrest after the bombs drop and the man must choose between love and duty.”

An Invitation Out, by Joshua Cook, directed by Deanna Jent, April 9-26, 2015: “Joshua Cook is a local playwright who won the Mustard Seed Theatre Playwriting Competition in 2011 with his play Geography of Nowhere. An Invitation Out is a futuristic comedy of manners that takes place in Virtual Reality, where humans ‘live’ in avatars of their own choosing.”

Deanna Jent is a professor of theatre at Fontbonne University, where she has taught and directed shows since the fall of 1995. She has been nominated five times for the St. Louis Kevin Kline “Best Director” award and won the Kline award for Best Production of 2007 for Standing on My Knees. In addition, three productions she directed (The Chosen, Going to See the Elephant and Women’s Minyan) have won the Kline award for “Best Ensemble.” Jent has directed at professional theaters throughout St. Louis, including the New Jewish Theatre, Shakespeare Festival St. Louis Touring Company, The Orange Girls, ACT Inc., Stray Dog Theatre, and St. Louis Shakespeare. She holds a Ph.D. in Theatre from Northwestern University. She is a playwright, a former Riverfront Times theatre critic and former editor of Christianity and Theatre magazine. Deanna founded Mustard Seed Theatre in the fall of 2007 and utilizes an artistic advisory board of resident artists.