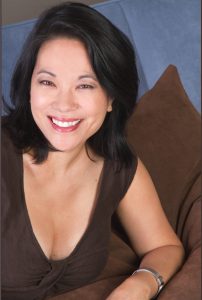 Christine Toy Johnson‘s new play The Secret Wisdom of Trees, about a woman’s need to map her past as she faces a future with Alzheimer’s disease, will get a reading Jan. 10, 2016, in The Barrow Group‘s reading series in Manhattan. Lynn Cohen plays Abby Green, an independent and funny octogenarian who prepares herself and her family for her journey into Alzheimer’s disease by planting trees in the locations of her the significant memories of her life.

“It’s inspired by a couple of lifelong family friends and some life events that they have been going through over the past couple of years,” Johnson said. “I wrote it with Lynn’s voice in my head — and she and her husband Ron have done the in-house readings we’ve had at the Barrow Group this year, which has been sort of an artistic home for me.”

Finding and charting one’s place in the world is essential to the play, and to Johnson’s mission as an artist. (In addition to being a playwright, she’s also an actress, director and advocate for the inclusion of artists of all colors, backgrounds and abilities.)

“I find that I write a lot about identity and belonging,” she told me. “I don’t necessarily set out to do so, but as a sixth generation Asian American woman, my own struggle with feeling excluded from the American landscape of storytelling is, I realize, my ‘essential wound.’ It’s what drives me to keep exploring a reconciliation of — in different ways, through different characters, in different situations — the need to fight for my place in the world. Though this is the first time I haven’t included any Asian American characters in one of my plays, I found that writing characters based on people I’ve known my whole life — and writing about their struggle to hold on tight to their own identities — reminded me that family is not always bound by race, ethnicity or religion, but truly by love. And love outlives memory. And these friends are my family.” 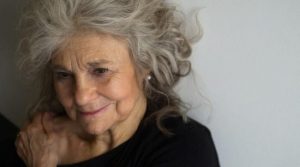 The Secret Wisdom of Trees is a rare play with an elder person at its center. Cohen, the respected stage and screen actress known for “The Hunger Games,” “Sex and the City” and last summer’s Barrington Stage Company production of “Lost in Yonkers,” among many other regional and New York productions, is north of 70 years old.

Johnson explained, “It’s meant a lot to me to illuminate the story of a woman ‘of a certain age,’ one whose passion for life and her soulmate has never waned — so influenced by my conversations with Lynn — but who finds herself needing to navigate her own journey of self-discovery in a new and unexpected way. In fictionalizing this story, I realize I was trying to heal my family friends’ real-life story in some way — with my wish for them that hope springs eternal in finding forgiveness and healing within one’s own family and in discovering you are able to hold on tight to your own special place in the world, no matter who or what tries to wrestle it away from you.”

Christine Toy Johnson: Abby is trying to control her impending fate. Her mother and sister also experienced Alzheimer’s. Although during the course of the play Abby has only had a few days to live with her own diagnosis so far, she has had a lifetime to “prepare” for it, knowing, as her mother says in the play, that Alzheimer’s is “the great thief of the Kirschenbaum women.” And of course, no matter how much Abby tries, she cannot ever be sufficiently prepared. She tries to make sure she will never forget what she doesn’t ever want to forget — and that she will be remembered in all the ways she wants to be remembered.

Does the play cover a lot of geographic territory? That is, are we literally going to the places where her life events happened? Does it play with time/space?

Christine Toy Johnson: The play takes place in various locations in New York City, but also in Abby’s mind, a non-literal space filled with precious memories. But ultimately, it is a very New York City-centric play.

What impact does her ailment have on her? Is she tough or vulnerable? And we all know that the family/caregivers become victims of this disease. How is the family impacted?

Christine Toy Johnson: Abby has only recently been diagnosed and is as tough as they come. But also as loving. I think her vulnerability emerges out of the action she endeavors to take to make sure Danny, her husband of 60 years, is okay as the disease progresses. Only he knows the diagnosis; she has opted not to tell their grandsons, who become estranged from them during the course of the play because of a family lawsuit. Danny is still in the beginnings of navigating his way through the new normal and making it possible for Abby to live in all the good parts of the present. 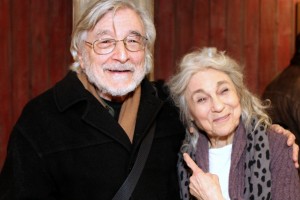 Sorry to be sappy: Is there a love story in the play? I always look for the love.

Christine Toy Johnson: There is the deepest love story between Abby and Danny, who met freshman year of college and married upon graduation. Sixty years later (much like Lynn and Ron Cohen, though they have been married a mere 51 years), they are inseparable. When Abby tells him she’s planting the trees to mark the spot of their life events so that he’ll remember when she can’t, he replies, “As if I could forget one second of this miracle of a life we’ve had together.” That sums up how I see their never-ending love story.

Mention some of the other characters in the play? Are they “blood family” or extended?

Christine Toy Johnson: The other characters in the play are Abby and Danny’s daughter Jenny (who is facing her own challenges), Jenny’s ex-husband and their three sons.

We seem to finally be in a time when writers of color are not “ghettoized” — by producers or by audience perception — into being obligated, somehow, to write about their own heritage. Branden Jacobs-Jenkins writes about a white family in Appropriate, for example, and you say this is a play that’s doesn’t reflect Asian Americans of your own heritage. Do you think the rules of “ownership of story” are changing? Can a white woman write about black men? Can a white man tell the story of an Asian family? Can a New Yorker write about the Deep South? We have lived for years with plays by white folks getting the story of outsider wrong — or relying on tropes that perpetuate stereotypes. It seems to me that writing with complexity and sensitivity is the key to writing about the “other,” no matter who the other is.

Christine Toy Johnson: I think that writing with authenticity is what’s key here. The universality of a human story can only be conveyed by specifics, and only if those specifics are true to the people that inhabit the story. As storytellers, we are given the honorable task of writing what we “know” — and also exploring and illuminating what we question and what we don’t know. I believe it is our responsibility to explore and illuminate with the utmost attention to authenticity, complexity and sensitivity (as you mention) and that the privilege we have is in being able to connect the deep layers of our humanity in this way. I have written many characters that are outside of my own cultural background, and always check in with people I know who are of those backgrounds — whether it’s a person with a different ethnicity, geographical upbringing, religion, or disability etc. — to make certain that what I am writing rings true. Of course whatever we write starts with what we see through our own personal lens, but it’s exciting to me to focus that lens onto someone else’s world and be able to express the impact it has on me through the beauty of dramatic writing. Mining the authenticity only makes that lens larger and clearer.

How did you start and grow the play? Has The Secret Wisdom of Trees been read/developed elsewhere?

Christine Toy Johnson: I had the idea of dramatizing elements of my family friends’ real-life story for a while — but I literally saw a photo of Lynn Cohen at a social gathering on someone’s Facebook page (Lynn and I met years ago through the Actors Center and The Barrow Group) — and I thought, I must write this play now. And I must write it for Lynn to do. I called her, we had coffee the next day, I told her the story and that I wanted to write it for her and she said, “Yes!” The next week, I went to Wellfleet Harbor Actors Theater to direct Seminar and was staying in a secluded little cabin in the woods, with sliding doors opening up onto a marsh of beautiful trees. I had already had an idea that trees would be at the center of a metaphor I wanted to explore — and here I was, waking up with the sun and being inspired by the view of these trees. As our rehearsals never began till a full six hours after I arose, I found myself finishing a first draft of the play in two weeks. I also had been talking with my dear friend Lee Brock (co-artistic director of the Barrow Group) for some time about developing some work there and when I told her about this play, she immediately opened her arms and studio to us. We did a couple of round-table in-house readings of the play with Lynn and Ron and some other wonderful actors at the Barrow Group in May and August 2015 — and I immediately learned where certain characters needed to expand and what questions needed to be answered. We decided it would really benefit from being read with people in the house — so Lee put it on the Barrow Group’s Reading Series schedule for January. This will be the first public reading of the play!

What do you hope to get out of the Barrow Group reading?

Christine Toy Johnson: I always think that the audience is a vital additional scene partner for a play — and I’m hoping to learn from how the room experiences the story, and how it might resonate with them. Do the elements of fluid time and reality that are imbedded into the story move the story along in the best way? Are they clear and impactful?

The free public reading of The Secret Wisdom of Trees is 6 PM Jan. 10 at The Barrow Group Theatre Company, 312 W. 36th Street, third floor. Seating is limited. Make a reservation.

Christine Toy Johnson is an award-winning writer, actor, director and advocate for inclusion. Her plays and musicals have been developed/produced at such places as The Roundabout Theatre Company, The Barrow Group Theatre Company, Crossroads Theatre, Village Theatre, The Weston Playhouse, CAP21, Leviathan Lab and Prospect Theater Company. A collection of her work is included in the Library of Congress Asian Pacific American Performing Arts Collection. She is the 2013 recipient of the Rosetta LeNoire Award from Actors’ Equity Association for “outstanding artistic contributions to the universality of the human spirit in the American theatre.”

Christine Toy Johnson’s work can be found at newplayexchange.org.