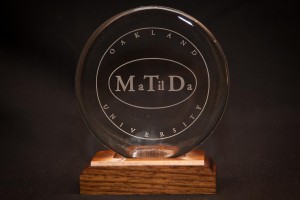 The Department of Music, Theatre and Dance of Oakland University in Rochester Hills, Michigan, surprised me this year with an Alumni Achievement Award in Theatre as part of its 18th annual MaTilDa Awards honoring “outstanding contributions from music, theater and dance students, alumni and distinguished community members.” The honor, being presented on campus April 18, is for my “contributions to playwriting,” OU department program director Kerro Knox 3 told me.

Past Matilda Alumni Achievement Award recipients include Tony Award winner Jayne Houdyshell, director and actress Lavinia Moyer, actor Curtis Armstrong, actor Esau Pritchett and many more. (In a happy coincidence, Pritchett, who graduated OU long after I did, appeared in the first reading of my play Alabama Story when it was presented in the Southern Writers’ Project of Alabama Shakespeare Festival in 2013.)

“Matilda” refers to the late OU founder Matilda Dodge Wilson, on whose donated land the university was built. Her given name was chosen because imbedded within it are the letters M, T and D, representing “music, theatre and dance.” OU is the home of the nationally known Meadow Brook Theatre, a regional Equity theatre independent of the undergrad department. Theatrically, the OU Department of Music, Theatre and Dance offers BFA degrees in acting, musical theatre, and design and technology.

In the past year, OU professor of theatre Karen Sheridan, who teaches acting and directing — and whose work I knew and respected back in the 1990s when I was working in the Detroit area — became aware that my play Alabama Story was being produced in regional theatres around the country, and suggested me to the department for this alumni honor.

In the coming 2017-18 season, Alabama Story will be seen in at least five productions, with more to follow. My play Two Henrys was recently seen in a reading by Hudson Stage Company in New York following a workshop by the Co-Op of Pacific Resident Theatre in California. My play Hollywood, Nebraska, will get a Wyoming workshop in late summer following its 2016 success in a reading by Off-Broadway’s TACT/The Actors Company Theatre.

I just completed a draft of a new play called Circa 1976, which I’ve been billing this way: “It’s July 4, 2016, and alumni of Evergreen Elementary School’s class of 1976 have gathered for the 40th anniversary of their graduation from sixth grade. A handful of former classmates in their early fifties — a jock, an artist, a cheerleader, a brain and an overachiever — find themselves in their old music room, where memories of past teachers, tensions and traumas are conjured like half-remembered songs. The present concerns of a divided America dovetail with the anxieties of the past to spark an unforgettable reunion that calls into question the Spirit of 76.”

The play’s inspiration is a series of unsolved child murders that happened in 1976-77, when I was growing up in the suburbs of Detroit. The play is not a crime drama; it seeks to be an exploration of universal modern fears as it presents a portrait of a generation leaning into middle age. The characters recall the killings and its victims.

If you’re a producer, literary manager, director or artistic director, you can request perusal copies of my work here.

I was not able to attend the MaTilDa Awards dinner, but in a letter read to the crowd, I said, “My playwriting career began when I was in my late forties. I am an ‘emerging playwright’ in middle-age. Patience was everything. And the payoff is somehow sweeter. It’s an honor the receive the MaTilDa Alumni Achievement Award. Thank you, Department of Music, Theatre and Dance, for the tools to be a smarter theatergoer, a smarter arts writer and a smarter dramatist.”