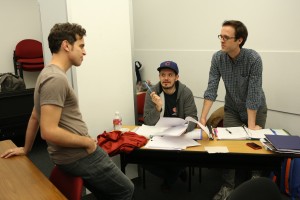 Slant Theatre Project, the indie-minded Off-Off-Broadway company devoted to new plays, celebrates its tenth anniversary with the world premiere of Mat Smart‘s Naperville, a rueful comedy set in a coffeehouse at which regrets about the past get stirred up. Performances play Nov. 20-Dec. 6 at the June Havoc Theatre in Manhattan. Slant co-artistic director Adam Knight, who directs the production, shared some history about the play and how it fits into the Slant mission.

Take a look at my interview with playwright Smart, which appeared in TDF Stages magazine the week of the play’s launch.

Here’s how Slant bills Naperville: “Howard leaves his career in Seattle and moves back home to Naperville to help his mother Candice transition after an accident leaves her blind. At the local Caribou Coffee, they cross paths with Anne, Howard’s old classmate and an expert on Naperville’s founder, Captain Joseph Naper. Naperville is a comedy about high school crushes, curfews (for your mother), sight, and how beauty reveals itself in the suburbs.” 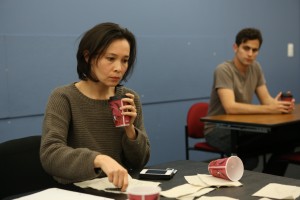 Stacey Yen and Matt Dellapina in rehearsal for “Naperville.” (Photo by Jeremy Daniel)

“It’s a comedy about reconnecting to the place where we’re from, but also what the hell we’re doing with our lives,” Knight told me in between rehearsals.

Playwright Smart is one of four co-artistic directors of Slant. His most recent play there, The Steadfast, his look soldiers in American wars since the Revolution, was produced in 2013 under the direction of co-artistic director Wes Grantom. In Naperville, co-artistic director Matt Dellapina (Off-Broadway’s Too Much Sun, The Dream of the Burning Boy) plays Howard, the thirtysomething who comes back to the title town in Illinois. The idea of looking back at the core people and passions in your life is central to this bittersweet valentine to suburban and small-town dreamers.

“The dream of the suburbs is a dream of community, it’s a dream of égalité,” Knight observed. “We make fun of these houses looking the same, but it was the dream of there not being a mansion of the hill and bunch of people in little mill villages. It was a dream that people would all be equal. What’s hard about growing up in the suburbs — and I grew up in the suburbs — is there’s this belief that you’re the same as everyone else but there’s also this frustration that ‘greatness doesn’t live here.’ Greatness lives in New York City, or in The Big City, and that living in this place where everything feels the same isn’t meaningful. I think the play is able to challenge that, in an earned way.”

(Grantom, Knight and Smart all studied theatre at the University of Evansville in Indiana and reunited in New York owing to their mutual passion for new works. Dellapina is the native New Yorker who shared their vision.) 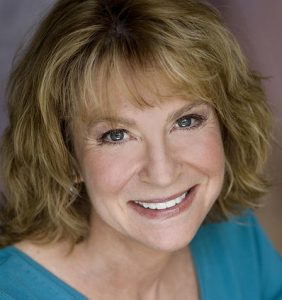 In addition to Dellapina, the Naperville cast includes Susan Greenhill (Primal Play, The Steadfast, Broadway’s Crimes of the Heart) as Howard’s independent-minded mom, Candice; Stacey Yen (Eager to Lose, Love in the Wars) as Anne, a high school acquaintance of Howard’s; Brent Langdon (The Steadfast) as Roy, a coffeehouse habitué and Good Samaritan; and Brett Epstein (The Flea) as coffeehouse manager T.C.

“We committed to Naperville before it was written,” director Knight explained. “Mat is from Naperville. Mat had an idea. Part of the conversation was making the play personal and about a specific place and not the ‘suburbs’ in general. Out of that conversation grew a more full idea. We brought that to the group. Mat had about one-eighth of the play written, about twelve pages, and we believed in it. We mapped out a course and committed to it. It’s something that I love about Slant, and I wish that I sensed more of it in other places: a belief that the work will find itself if you get the right team together.”

(Since its first blush as an idea in the past year, Naperville was developed in Knight-directed readings at Cleveland Play House, Primary Stages and Vineyard Arts Project.) 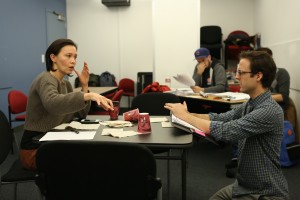 In addition to staging at least one Equity production a year at a rented space (this fall, at the June Havoc), Slant presents developmental readings of new plays throughout the year and produces the live podcast On This Island — music, monologues and scenes related to New York City — four times a year at Ars Nova (Dellapina hosts).

About once a week the artistic directors will talk by telephone to discuss ideas. “When we’re in show mode we’re talking almost every day,” Knight said.

A “collective” is not a bad way to explain Slant’s vibe, Knight agreed. The artistic directors have individual projects outside the company and return to “drive the decisions and share the duties” of the company on an Off-Off-Broadway budget.

“One of the original things that excited us was to create a group of artists, be an artist-driven theatre,” Knight said. “We felt that as a group we would create better work than as individuals.”

Here’s the complete production history of Slant Theatre Project, if you’re curious. And check out my earlier interview with playwright Matt Moses, on the subject of Slant’s spring 2014 world premiere of his play The Cloud. 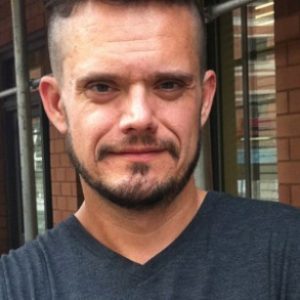 Mat Smart’s plays include Samuel J. and K., which premiered at Williamstown Theatre Festival starring Justin Long and Owiso Odera (subsequent productions include Steppenwolf Theatre Company and Passage Theatre); The Steadfast (Slant Theatre Project); Tinkers to Evers to Chance (Geva Theatre Center); The Hopper Collection (Magic Theatre and Huntington Theatre Company); The 13th of Paris (City Theatre, Seattle Public Theatre, Horizon Theatre, Public Theatre of Maine, Warehouse Theatre and LiveWire in Chicago); and The Bebop Heard in Okinawa (O’Neill National Playwrights Conference). He has been commissioned by South Coast Rep, Huntington, and Denver Center Theatre Company. Smart has an MFA from UCSD. His play The Royal Society of Antarctica will premiere in March 2015 at The Gift Theatre in Chicago. He is currently a member of the Dorothy Strelsin New American Writer’s Group at Primary Stages.

Tickets for Naperville are $18 and are available online. The June Havoc Theatre is at 312 W. 36th Street, First Floor. Opening night is Nov. 24.