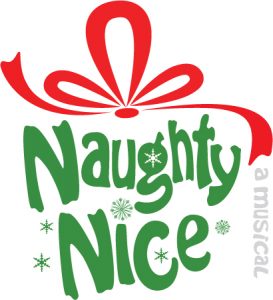 Naughty/Nice, a musical comedy revue featuring four adult performers playing a multitude of twisted, profane and heartbreakingly desperate children writing letters to Santa Claus, joined the growing catalog of Steele Spring Stage Rights in late 2015, making the property available for licensing in 2016 and beyond. The 90-minute piano-and-voice musical by lyricist Kenneth Jones and composer Gerald Stockstill is suitable for small theatres and cabarets, or the casting can be adjusted to accommodate a larger cast.

Perusal copies are available through the publisher. An hourlong version of the show is also available. The title was among 25 new properties unveiled in fall 2015 at stagerights.com.

“We’re always on the lookout for fresh and exciting new work, and Naughty/Nice certainly fits the bill,” said Roger Bean, president of Los Angeles-based Steele Spring Stage Rights. “A fun concept, great music, wonderful lyrics all add up to a nice package that we feel will fill some holiday seats in theatres around the country. We are thrilled to have Ken and Gerry’s show join our licensing family.”

Lyricist Jones and composer Stockstill, who conceived and wrote the show, met in the BMI Lehman Engel Musical Theatre Workshop. In 2010 they received the Dottie Burman Award for excellence in songwriting from the Manhattan Association of Cabarets and Clubs (MAC). Naughty/Nice was a membership-recommended semi-finalist in the National Alliance for Musical Theatre’s Festival of New Musicals.

The creators view Naughty/Nice as perfect for “downtown” commercial venues or “second stage” spaces at resident theatres, and/or as counter-programming to more traditional fare like A Christmas Carol. In addition to it being perfect for a November-to-January programming slot, the show is viable as an off-season summer specialty, presented with a “Christmas-in-July” marketing twist.

Mixing the heart of “A Charlie Brown Christmas” with the salty postmodern comedy of The Santaland Diaries, Avenue Q and Spelling Bee, the darkly comic Naughty/Nice was seen in Manhattan concert stagings at the Players Theatre, Ars Nova and TACT Studio, when the writers partnered with ASTEP/Artists Striving to End Poverty and its founder, music director Mary-Mitchell Campbell. In many ways, the show was designed as an affectionate throwback to the Greenwich Village musical revues of the 1950s and 1960s, when a piano and a brick wall and spare costumes and props were all that you needed to support material that was tuneful, satiric and sharply funny.

Here’s what I said about the show’s history in an earlier posting on my website: “A couple of years ago I pitched a simple idea to Gerry: A revue of songs featuring broken kids writing twisted letters to Santa Claus, with four adult actors playing the children. Piano and voice. Simple set. Lyrics by me, music by Gerry. It would be comic, dark and tuneful, with a large dollop of pastiche — a lullaby, a tap specialty, a bossa nova tune, a Kurt Weill tribute, a brassy diva number and more — plus a continuous thread of our own songwriting style (melodic and sincere) stitching it together. Free of the constraints of a book or conventional ‘story,’ Gerry and I drew on skills that we had already sharpened in the BMI Workshop. That is, each song would tell a complete story — beginning, middle and end, with specificity of character evident throughout.” 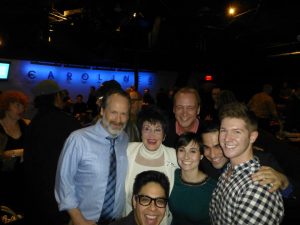 In 2013, Naughty/Nice was presented in a sold-out concert at Caroline’s On Broadway. Directed by Stephen Nachamie, that presentation — produced by Producer Circle Company as a benefit the New York Center for Children — featured Alexandra Frohlinger, Timatha Kasten, Eric Michael Krop and George Salazar (as the core foursome), with Emily Bindiger, Dennis Deal, Carolee Goodgold and Jim Vincent as guest carolers. David Gardos was musical director.

At that performance, Chita Rivera led a standing ovation following the premiere of a song called “The Shadow of Corcovado,” about an at-risk kid asking Santa for help with a medical issue.

In recent seasons Broadway orchestrator, arranger and music supervisor Lynne Shankel (Allegiance, Altar Boyz) invited one of the show’s songs (“Wish for a Daddy”) to be performed (by Sally Wilfert) in the starry annual New York City Christmas concert, first at the now-gone Zipper Theatre in midtown and subsequently at Joe’s Pub at The Public Theater. 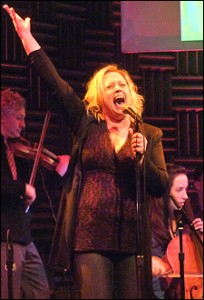 Shankel’s frisky arrangement and Wilfert’s vivacious performance are captured on the studio concert-cast album on the Sh-K-Boom/Ghostlight Records label.  Listen to Sally and Lynne’s version here. Proceeds from the concerts and the album go to the not-for-profit ASTEP, which “connects performing and visual artists with underserved youth in the U.S. and around the world to awaken their imaginations, foster critical thinking, and help them break the cycle of poverty.”

Read more about the flavor and history of Naughty/Nice here.

Jones and Stockstill are currently working on a new musical. Jones’ play Alabama Story will get three Equity regional productions in 2016 following its acclaimed 2015 world premiere by Pioneer Theatre Company. His new play Two Henrys will get a reading in Pioneer’s 2016 Play-By-Play reading series. Stockstill is a songwriter, arranger, performer and musical director whose musicals include Too Good to Be True (with lyricist Amy Coady) and Food, the musical (with Donna Kaz). Together, Jones and Stockstill penned the title track of Maxine Linehan’s Petula Clark tribute album, “What Would Petula Do?”

The authors are grateful to the many performers who took on roles in the many concert versions of our epistolary musical designed for two men and two women, especially Chris Hoch, Cindy Marchionda, Jason Ma and Sally Wilfert, as well as the tireless Mary-Mitchell Campbell.

Stage Rights is one of the foremost independent theatrical publishers in the United States, providing stage performance rights for a wide range of plays and musicals to theater companies across the country and internationally. Founded in 2000 and based in Los Angeles, Stage Rights’ guiding principle as a licensing agent is to combine high-quality rehearsal materials with top-notch customer service in an ongoing effort to provide each producer with the tools they need for financial and artistic success. Stage Rights maintains a dedication to the future of live theatre through their special programs that champion new theatrical works.