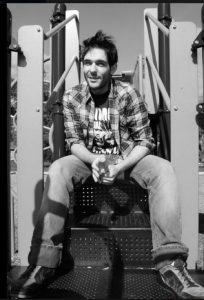 Matthew-Lee Erlbach, the feverishly imaginative mind behind the webseries “Roger, the Chicken” and the plays Kevin Lamb, Handbook for an American Revolutionary and Eager to Lose, will hear his new play, A Neighbor in the Area, about a woman’s unusual affair, in a Manhattan reading Aug. 27.

Here’s how the play is billed: “Taking place in 1966 suburban Westchester, A Neighbor in the Area centers on an isolated Quebecois woman on the verge of an existential crisis whose bizarre and taboo affair suddenly spins out of control. The dark comedy explores the tensions of the unsaid, the alienation of modern society, and our escapist relationship with technology.”

Erlbach told me, “It lives very much in a Kafkaesque-‘Twilight Zone’ kind of world.”

I asked Erlbach what prompted the play. 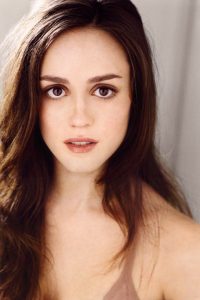 Heather Lind will read the role of a suburban woman who is having an affair.

“I was in Montreal, giving my head a rest from another play,” he told me. “I started writing this young married couple, coming back from a party, just to hear other voices. Suddenly, we were in the ’60s in Westchester, and I felt very nervous for them. And so I started to unknowingly write this parable.”

He continued, “As I kept going, the characters were talking — and not talking — about their own happiness, the purpose of their lives, their human bodies, human morality. Conversations in a quiet, isolated, perfectly manicured suburb. Very tense. And I kept feeling like there was a big secret in the play. That something was underneath all this — a monster, a threat, or some kind of truth or nightmare that would upend it all. It didn’t take long for me to connect that with my own feelings and where I’m at personally right now, so I knew where this play was coming from on a much deeper level.”

The play that emerged, he explained, is “about a woman dealing with her past, hiding a terrible secret, and finding a way to escape her monsters by finding the love of another one.”

The world of the play is “a very tense snow globe — the artifice of which can only hold up for so long. Like the world we live in now. You can live in beautiful [suburbs] but the civilization around it — around us — is just completely mad, and illogical and unfair and bureaucratic and absurd and chaotic. And so while they live in a pretty place, psychologically, everyone is just trying not to go mad.”

Read my earlier interview with Erlbach, on the topic of Kevin Lamb, a 2013 finalist in the National Playwrights Conference of the Eugene O’Neill Theater Festival.

Matthew-Lee Erlbach is an actor and writer whose most recent writing credits include Eager to Lose, a Burlesque Farce in Rhyming Verse, at Ars Nova (Wes Grantom and Portia Krieger, directors); Handbook for an American Revolutionary at Gym at Judson (Tony Speciale, director); and the award-winning “Roger, the Chicken,” produced with Emmy-winner Carrie Preston. He has also written for Nickelodeon, WWE and MTV. As an actor, he has appeared Off-Broadway, regionally, in “Another Earth” (Sundance/Fox Searchlight), on Comedy Central, MTV, “Law & Order: SVU,” and elsewhere. He is a member of Ars Nova’s 2014-15 Play Group.