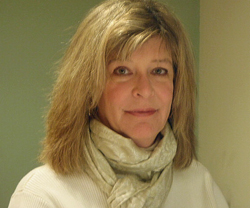 Michigan playwright Kim Carney‘s Geoffrey & Jeffrey, a comedy about a non-traditional family, first seen in Ann Arbor in 2008, will get a reading May 9 at Queens Theatre as part of the New York City venue’s New American Voices Project, a play development series.

Rose Ginsberg directs the reading of the play, which was inspired by the relationship of Michigan theatre director Jim Posante and his partner Charlie Sutherland. Its world premiere, shadowed by a tragic real-life twist, was produced by Performance Network in Ann Arbor.

Here’s how Queens Theatre bills the play: “Geoffrey and Jeffrey, long-time lovers and co-owners of the Cup ‘n’ Muffin, are going through a rough patch. To make matters worse, Jeffrey’s heretofore unknown daughter shows up, with her rebellious teenager in tow. Based on a true story, Geoffrey & Jeffrey explores the meaning of commitment, partnership, and the changing definition of family in today’s world.”

Carney told me, “The play is based on the true story of my good friend Jim Posante and his partner of many years, Charlie Sutherland. They’d been together for thirty-something years when Jim found out he had a daughter and a granddaughter! Of course, things turn out differently in my play than they did in real life, but it was a great basis to start from. Jim and Charlie really loved the piece, and Jim was all set to direct it at the Performance Network, but unfortunately he suffered a massive stroke and died before that was able to happen. At heart, the play is a love story, focusing on the long-term relationship between the title characters, and exploring the changing definition of family in today’s world.”

She added, “I’ve done quite a bit of tweaking since the production. I think the story and the message of the play are more relevant now than ever, and I hope the play packs as much — or more — emotional wallop than it ever did. My goal is to get it out there to be experienced by a wider audience.” 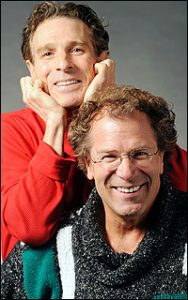 Thom Whalen and Jim Porterfield in the 2008 premiere of “Geoffrey & Jeffrey” at Performance Network.

Carney’s plays include The War Since Eve, Maggie Rose, Moonglow (both at Performance Network), Labor Day, Only Me and You and Nooner (all at Jeff Daniels’ Purple Rose Theatre), Photographic Memories (at the Boarshead Theatre and Baldwin Theatre in Royal Oak), Bombshells (also at the Boarshead, as well as University of Detroit’s Theatre Company), Life Is a Beach (Millenium Theatre), I Love Christmas (1515 Broadway) and Lib (Planet Ant). A graduate of Wayne State University’s theatre department, Carney received its 1998 Alumni Achievement Award.

Here’s a Q&A with Kim Carney that recently appeared on the invaluable EncoreMichigan website.

The New American Voices Project is Queens Theatre’s year-round new play development initiative. Every year, four to eight new plays are selected for the reading series, chosen “for their reflection of the experiences and communities who comprise the borough’s population.” The readings are free and open to the public. Reservations may be made by calling the box office at (718) 760-0064 during regular opening hours (Tuesday through Friday, noon to 6 PM).

Next up in the New American Voices Project is Housekeeping by Margaret Vandenberg, directed by Lisa Rothe, May 16 at 8 PM. Here’s how the play is billed: “The Ryders have it all — a sumptuous Fifth Avenue penthouse, a precocious son and heir, and a resourceful housekeeper named Anna, whose loyalty is tested when a domestic crisis looms. Having lost her own family in the Serbo-Croatian War, Anna is perhaps overly protective. But no one could have predicted how far she is willing to go to avoid the specter of history repeating itself.”

For more information on the programs of Queens Theatre, which is on the site of the 1964 World’s Fair in Flushing Meadows Corona Park, visit queenstheatre.org.

This story marks the 100th piece I’ve posted since the 2013 launch of my website devoted (mostly) to new works (including my own plays and musicals). I’m so pleased that the milestone posting coincided with an event related to my roots in Michigan, where I came of age as a theatregoer, a theatre writer and (little did I know) a dramatist.