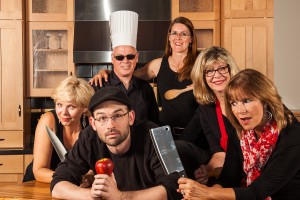 The idea of the kitchen-sink drama — gritty, angry plays of social realism — gets a full remodeling job in suburban Detroit this month with “The Kitchen Plays,” a world-premiere collection of new works being presented in a unique location.

A group of area playwrights is cooking up a half-dozen short plays, all of them set in kitchens, to be performed in the pristine, well-appointed model-kitchen settings in the showroom of Royal Oak Kitchen & Bath, the home-improvement store on Woodward Avenue in Royal Oak, MI. The writers enlisted area directors and actors to help whip up the show, a sort of pop-up theatre event with little precedent in Michigan theatre.

After business ends at Royal Oak Kitchen & Bath on Oct. 4-5 and Oct. 11-12, kitchen displays in the showroom will be populated at 8 PM as settings for six comedies. A post-show sampling of food and drink related to the writing will be served.

“It teaches the audience a different way to look at theatre,” said playwright Kim Carney, one of the organizers, who explained that there will be room for about 30 seated theatregoers each evening.

“It’s up-close and personal,” said Heidi Bennett, an Ann Arbor actress and director who was asked by the writers to serve as producer. “We think of it as a dinner party or a cocktail party where there happens to be great theatre happening. If people are up for a theatrical adventure, I think they’re going to love the experience.”

Folding chairs will be moved throughout the showroom, from set to set. Bennett said, “We’re looking for more folding chairs!”

The master chefs in this enterprise are the six playwrights who, since early 2012, have gathered at Royal Oak Kitchen & Bath to read and critique each other’s plays. The store is owned by Tim Holton, husband of playwright Carney.

She said with a laugh, “We meet [there] because it’s free, with a conference room with a big table where we can share work. We had been talking about trying to do a project together. We looked around the showroom, and there are all these mini-sets. So we came up with the idea of doing short plays set in a kitchen, with each play revolving around a certain food.”

“The Kitchen Plays” is a way for the resident playwrights to promote their own work, according to Carney, whose plays have been produced by Purple Rose Theatre Company, Performance Network, among other companies.

No one is getting rich off of “The Kitchen Plays.” Proceeds from tickets will cover props and gas money for participants, said producer Bennett.

Yolanda Fleischer, the West Bloomfield director assigned to stage MacGregor’s play, said that in her 33 years of directing in the Detroit area she couldn’t think of a similar walkabout theatre experience at a “found” space.

“These six playwrights are dedicated,” Fleischer said. “They meet on a regular basis to share their work with each other, they’re constantly rewriting and getting better. I think it’s a great way to showcase not only these six people but the idea that there are lots of talented writers in Michigan — and that they can make something clever and creative in a 10-minute format.”

In recent weeks, they’ve been rehearsing with their actors off-site. Tech rehearsals were held after-hours at ROK&B the week of Sept. 22. A dress rehearsal will be held Oct. 3, the night before the first public performance. (Tickets are selling well, and an additional performance may be added.)

Most of the plays are comic in tone, Carney said. Her play, “Poppycock,” for example, is about two old friends who are empowered by an entrepreneurial leap, making caramel corn. It features Melissa Beckwith of Ferndale and Autumn Waters of Northville under the direction of LeRoy.

MacGregor’s play, “Fixing Bob,” featuring Frannie Shepherd-Bates of Royal Oak and Robyn Lipnicki Mewha of Plymouth, is about a woman considering using a kitchen knife on her husband. Expect some aggressive knifework.

Fleischer said, “The length of the plays guarantees a concentrated experience. The audience gets a rush in a very short time. This is not traditional. That’s why I said, ‘I’ll do it!'”

The drawback, Fleischer added,  is that she now has kitchen envy: “If you were staging this in a theatre, it would probably be too expensive to be produced — the granite countertops, the cabinets! I fell in love with a couple of them, but my husband said, ‘No!'”

Tickets to “The Kitchen Plays” are available online.

A version of this piece appeared in the Sept. 29, 2013, edition of The Oakland Press, the Pontiac, Michigan daily where I began my career as a freelance entertainment writer and theatre critic.