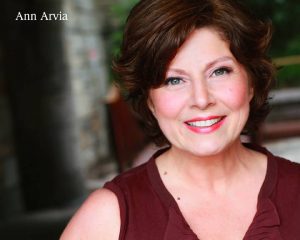 Broadway actress and voice teacher Ann Arvia and critically acclaimed director Linda Brovsky, longtime music-theatre colleagues respected for their work on a range of projects, are hanging out a shingle together to offer audition workshops for dancers and actors seeking to grow muscle as performers. Their series of workshops, under the banner of “Mastering the Musical,” begins Aug. 17 with a class called “Your Best You in Song.”

The 7-10:30 PM session in Manhattan will include working on the performer’s choice of material in a small class, with participants taking away three new song suggestions to work on for future auditions. “People will gain valuable insights about how they are perceived in the room,” Arvia told me. “It’s meant as a kind of safe place for the reawakening of performers’ artistic and storytelling muscles.”

(I was lucky enough to have Ann, a veteran of Broadway’s Les Miz, Mary Poppins and Beauty and the Beast, sing on the demo of my musical Voice of the City. That studio session included Ann assigning vocal parts on the spot. Yes, she’s that incisive and smart — immediately cutting to the core of things.) I previously wrote about her turn as sister Marie in Goodspeed Musicals’ recent revival of The Most Happy Fella.

Other workshop titles are “Opera to Broadway: Mastering the Crossover” and “Ballet to Broadway and Beyond,” plus “Broadway’s Minor League,” a workshop aimed at teen performers. 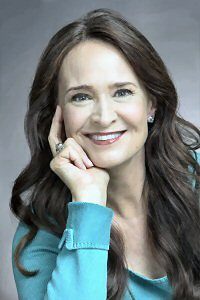 Brovsky, an opera and theatre director who has worked around the world, shared some of the goals of the classes.

“The mission of ‘Your Best You in Song’ is to address  ‘audition nerves’ as well as polish material before the audition season starts,” Brovsky told me. “‘Opera to Broadway: Mastering the Crossover’ and ‘Ballet to Broadway and Beyond’ address the very specific needs and mindsets of opera singers and dancers who have the talent for musical theatre but lack the  ‘vocabulary’ and process. We hope to at least give them the tools to explore this world further when they leave our workshop and know what areas they specifically need to work on. ‘Broadway’s Minor League’ is a scaled-down workshop for the younger set — ages 14 to 18 — to give them a taste of the professional world of musical theatre as well as some valuable skills for their high school musical. If we can start young, perhaps we’ll inspire the next generation and give them the insights about the courses and approach they’ll need in college to pursue a performing career.”

Ann and Linda fielded some of my questions in the days leading up to their first workshop.

How did you two meet?

Linda Brovsky: Back in the Bronze Age (1989), I cast Ann as Lillian Holliday in a production of Happy End at the Court Theater in Chicago. Management strongly wanted one of their favorites but Ann showed up and literally lit up the stage. Her wisecracks about the audition process convinced me that she was the actress I wanted and I fought for her. Needless to say, it was one of the best casting choices of my career!

Ann Arvia: Our artistic collaboration grew into a friendship and a few years ago, we worked together on a reading of a new musical called By Grace.

Why are you two a match for these classes?

Linda Brovsky: I think Ann and I are a good match for the workshops because we seek the same depth and honesty in a performance but from different perspectives. Ann, as a seasoned Broadway performer, understands the fears and frustrations of the audition process as well as what it takes to book the job. She is also an accomplished voice teacher who passes along a lifetime of training in both the musical theatre and classical worlds. As a director, I come from the other side of the table. I offer the perspective of the person who actually casts as well as the one who hears all the remarks from the musical director, choreographer and producers. Because I was trained as a dancer and direct both opera and musical theatre, I bring the vocabulary and insights from those worlds as well.”

Ann Arvia: I think our greatest strengths in working as a team are we are both great diagnosticians, our compassion and our humor. And we’ve both been out there working in this business as artists…for a really long time. We know what it’s like from both sides of the table.

How did you come to collaborate on these workshops, and can you share a little about the mission of the classes? 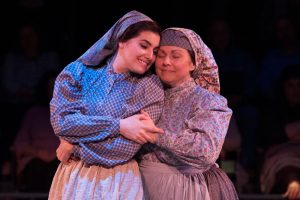 L-R, Maria Rizzo as Chava and Ann Arvia as Golde in “Fiddler on the Roof” at Arena Stage in Washington, DC. (Photo by Margot Schulman)

Ann Arvia: I teach voice in addition to my acting career and Linda has often taught in apprentice programs in various opera companies and universities. We’ve had numerous conversations about our experiences and frustrations with certain “holes” in people’s training and thought it was time to address them in a way that would be constructive for performers.

So “Mastering the Musical” was born. The first workshop we created was “Ballet to Broadway and Beyond.” Given the current Broadway season and its very dance-centric bent, we felt that empowering dancers to audition as  confidently when singing and acting as they did when dancing was a great goal to begin with.

My early training as a singer was “legit”; that is, classically based. Linda directs a great deal in the world of opera, so “Opera to Broadway: Mastering the Crossover” came to be. Since so many opera companies are now programming musicals, giving classically trained singers the tools to succeed at that seemed like a natural fit. That workshop includes a mock dance audition, a cold reading segment as well as working on the difference between musical theatre vocal production and an operatic approach. 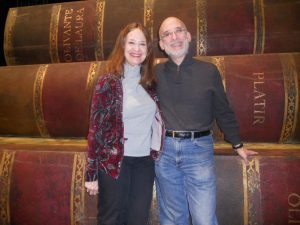 Linda Brovsky with director of production Vincent Feraudo on the set of her acclaimed Seattle Opera staging of “Don Quichotte.” (Photo by Patti Payne)

Linda Brovsky: The “missions” of the workshops evolved from Ann’s experiences in regional theatre, her master classes in Croatia and here and her teaching vocal technique to the dancers of An American in Paris combined with my guest directing at universities, hearing numerous rounds of auditions for The Wizard of Oz and cringing through opera galas as opera singers wailed show tunes. We had lengthy conversations about talented actors, singers and dancers who weren’t getting hired because they lacked the necessary skills for those auditions.

Likewise, we discussed those who had the chops but whose fear of auditioning, misunderstanding of musical theatre style, lack of polish or inexperience in front of the table prevented them from nailing the the job or getting rehired. In some cases, this was the result of inadequate training on the university level. In other cases, the training had been so intense in one discipline that all others had been ignored or devalued. Often it was a case of rusty performer skills with no time or place to “practice” them or re-learn them in a non-judgmental environment.

Rather than continuing to bemoan the state of performers, we decided to do our small part to help address it in small chunks that the performer could assimilate both artistically as well as financially.

Ann Arvia is a New York City-based actress. On Broadway, she was a member of the original cast of Mary Poppins and appeared in Beauty and the Beast and in the original run of Les Misérables. Off-Broadway, she appeared in the MTC production of Time and Again as well as Children and Art, the gala concert celebrating Stephen Sondheim’s 75th birthday. She has also toured extensively across the United States in both Les Misérables and Ragtime.

Regionally, Ann has appeared at Arena Stage in Washington, DC (Golde in Molly Smith’s Fiddler on the Roof starring Jonathan Hadary), Goodspeed Opera House in Connecticut (Marie in The Most Happy Fella and Connecticut Critics Circle Award nomination for Meg in Damn Yankees) and the Walnut Street Theatre in Philadelphia (Mother Abbess in The Sound of Music and Barrymore Award nomination for Carlotta in Phantom).

Ann is also a busy voice teacher, working with established stars, emerging performers and mid-career actors and dancers who are seeking to improve, maintain and challenge their vocal skills. She has taught master classes in the U.S. and abroad.

Linda Brovsky’s innovative productions are found on operatic stages throughout North America, including the San Francisco Opera, Santa Fe Opera, Seattle Opera, Los Angeles Opera, San Diego Opera, Opera Theater of St. Louis, Glimmerglass Opera, Palm Beach Opera, and Cincinnati Opera among many others with repertoire ranging from standard classics to world premieres including David Carlson’s The Midnight Angel, Scott Eyerly’s The House of the Seven Gables and the U.S. premiere of Lowell Liebermann’s The Picture of Dorian Gray. Recent credits include a debut with the Canadian Opera Company directing her critically acclaimed production of Don Quichotte, a remount of her Fascist Italy-set Rigoletto for the Seattle Opera, La Boheme for the Lyric Opera of Kansas City, and Le Nozze Di Figaro for IVAI in Tel Aviv, Israel. Upcoming engagements include Il Barbiere Di Sivilglia with the Pittsburgh Opera.

Her talents also extend to the world of musical theatre where she recently directed The Wizard of Oz for the Skylight Music Theater. Other productions include the 50th Anniversary National Tour of Oklahoma! for the Troika Organization, Happy End (Chicago’s Court Theater) and Carousel (Opera Grand Rapids) as well as the development of a new musical, By Grace. She has been a contributor to Biography Magazine as well as a guest speaker for the National Arts Club, the Guggenheim Museum’s “Works in Progress” series, and the American Opera Project’s “New Works” series. She also served as jurist for the Douglas Moore Foundation for New Composers.

Committed to training young singers, Linda has been guest director for productions at the Manhattan School of Music, AVA, San Francisco Opera’s Merola Program, the Brevard Music Festival, Temple University and the University of Michigan as well as scenes programs for Yale University, Carnegie Mellon University and the Santa Fe Opera Apprentice Program.