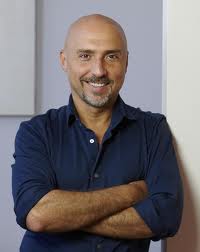 The Most Happy Fella, the final presentation of the 50th season of Goodspeed Musicals at Goodspeed Opera House in Connecticut, is winding down toward its scheduled Dec. 1 closing date. The critically acclaimed production is directed by Rob Ruggiero, who fielded some questions during the run.

Ruggiero is known for directing many plays and musicals regionally (including at Hartford’s TheaterWorks, where he is producing artistic director), Off-Broadway (Make Me a Song, All Under Heaven) and on Broadway (Matthew Lombardo’s High and Looped).  He conceived the popular biographical musical Ella, about singer Ella Fitzgerald, which has played many regional theatres across the country. He previously directed six Goodspeed productions, including his adaptation of Hammerstein and Kern’s Show Boat, design elements of which are resurfacing in his current revival at Asolo Rep in Sarasota, FL. Next season for the two-time Tony Award-winning Goodspeed in East Haddam, CT, he’ll stage a 50th-anniversary revival of Fiddler on the Roof. 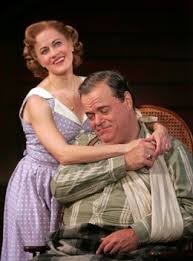 The Most Happy Fella, inspired by Sidney Howard’s 1924 Pulitzer Prize-winning play They Knew What They Wanted, has book, music and lyrics by Frank Loesser, whose 1956 Broadway score famously features soaring songs redolent of opera mixed with brassy show tunes that you expect of the Golden Age of Musicals. Among the songs: “Somebody, Somewhere,” “Standing on the Corner,” “Don’t Cry,” “Rosabella,” “Joey, Joey, Joey,” “Big D,” “Warm All Lover” and “My Heart Is So Full of You.” You get the sense sitting in the audience at Goodspeed that subscribers are turning to one another and saying, “Oh, this where that song came from!”

For the record, Herman’s late-Act Two number “I Made a Fist” has been cut from this production, so as to not distract from the primary destination of the story — the fate of Rosabella and Tony. Cleo and Marie’s duet that includes the phrase “I don’t like this dame…” has also been cut. 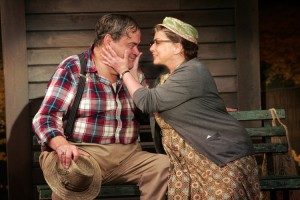 Bill Nolte as Tony and Ann Arvia as Marie in Goodspeed Musicals’ “The Most Happy Fella.” (Photo by Diane Sobolewski)

But restored to the score is “Eyes Like a Stranger,” a song for sister Marie that was cut from the original production, in which Marie is stricken by her brother’s rejection. (At first rehearsal in 1956, the show ran four hours; by opening night at Broadway’s Imperial in May of that year, it ran just under three. Ruthless cuts had to be made.) The song was added back for the 1979 Broadway revival (directed by Jack O’Brien and filmed for PBS), and appeared in the 1992 two-piano Broadway revival that originated at Goodspeed (though the number is not heard on the ’92 Broadway cast album, due space limitations on the disc). There’s a nice recording of “Eyes Like a Stranger” on Jay Records’ studio album of the complete score, featuring Jo and Frank’s daughter Emily Loesser as Rosabella. (The three-disc Jay recording also includes other songs that were cut from the score — a valuable listen for students of musical theatre and lovers of Loesser.) 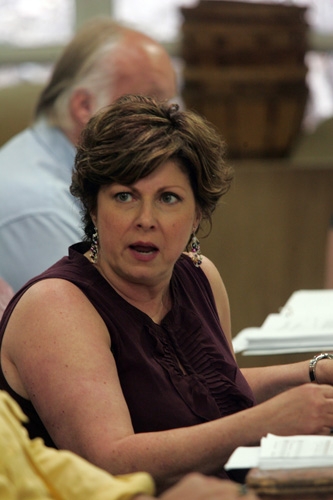 Ann Arvia in rehearsal as Marie at Goodspeed. (Photo by Diane Sobolewski)

Of “Eyes Like a Stranger,” Ruggiero says, “Jo Loesser asked me to [consider it]. I agreed that the character of Marie needs to be understood so she doesn’t become a villain or a plot instigator. I had passed it over, originally, and when I met with Jo, she said, ‘I really think you should take a look at it.’ I listened to it. I tried to divorce myself from the operatic voice attached to it. This is a beautiful song and it says everything you need to now about why Marie does what she does: She’s so afraid to be alone. And her relationship with her brother! It’s very Italian! When Tony says, ‘Shut up, Marie!,’ when he wants to get married to Rosabella, he talks to her and looks at her in a way he never has before. By adding this one song, it elevated the character and anchored the character of Marie in a beautiful way.” 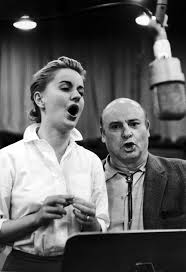 Jo Sullivan and Robert Weede recording the cast album of “The Most Happy Fella” in 1956.

The late-first-act addition of that song, just before the injured Tony marries Rosabella, makes dramatic sense. Without it, Marie’s presence in the famous “How Beautiful the Days” quartet in Act Two seems odd. We now have a better sense of her role in life: caregiver, supporter, critic, mother figure. Without “Eyes Like a Stranger,” her desperate act of grabbing the cane away from the disabled Tony at the end of the show — he is her crutch, get it? — makes her merely a monster. Loesser knew what he was doing, and the show is lucky to have Jo Loesser as its protector and torchbearer. To say nothing of Arvia, who conveys pain and fear with every pinched, sideways glance. The actress plays Marie with spectacles, underlining Marie’s extreme nearsightedness in life. She removes the glasses tellingly, rubbing her eyes. The changing world has strained her vision.

Arvia, a Broadway veteran of Les Miserables, Beauty and the Beast and Mary Poppins, “brings rich layers” to Marie at Goodspeed, agrees Ruggiero, whose heritage (like Arvia’s) is Italian-American. “She’s not just the bitch trying to get between Rosabella and Tony. I get that. I knew people like this: Italian brothers and sisters who lived together their whole life. It’s a co-dependency. Oftentimes, they never left home or they took care of their sick mothers; it’s a bond that forms.”

Ruggiero was a newcomer to the script and score before the Goodspeed assignment. “It’s not [revived] a lot,” he says. “It’s really challenging. I’m very proud of what we did. The styles of music are so varied. It was fun and challenging to honor that. It comes in at 57 [minutes for Act One] and 70 [minutes for Act Two], which is a lot shorter than some productions, but Jo Loesser was very supportive of those changes we made.” 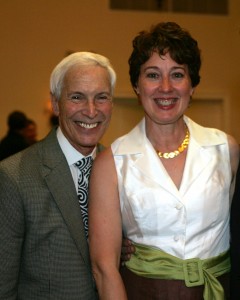 What is an initial conversation like between a director and the Goodspeed leadership of executive director Michael P. Price and line producer Donna Lynn Cooper Hilton?

“Because this my seventh show there, there’s a dialog,” Ruggiero explains. “Part of that conversation early on is [them asking] what shows I’m interested in, what shows they’re interested in and what shows they think I would be a good fit for. Michael and Donna Lynn were both a part of the 1992 Happy Fella that went to Broadway. She was actually the PSM on it! I was very happy that I didn’t know the show, and I purposely did not look at the archival. I still haven’t. I wanted to have an original, fresh take on it. She said, ‘When you’re ready to talk about it, we’ll connect you with Jo Loesser because she has a relationship with [Goodspeed].’ I met with Jo and got to know her. I threw out a few [ideas]. At a certain point, she said, ‘I trust you.’ She happens to have a friendship with my agent, so I think that accelerated the trust.” 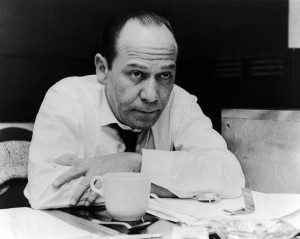 Composer-lyricist Frank Loesser in the 1950s.

This is the first time Ruggiero has directed a show featuring a score by composer-lyricist Loesser (1910-1969). He observes, “Isn’t it interesting? When you hear How to Succeed [in Business Without Really Trying], Guys and Dolls and The Most Happy Fella, if you didn’t see any credits, I would think they were written by three totally different people, which I think is a compliment.”

Ruggiero moved the time period of Happy Fella‘s action from 1927 to the 1950s. After all, there is little about the score or original orchestration that sounds like the Jazz Age. It’s hard to believe that the show was not first set in the ’50s. Recording artists from the ’50s covered tunes from the musical (“Standing on the Corner” by The Four Lads and The Mills Brothers, “Joey” by Peggy Lee), perhaps adding to a wide perception that these were modern songs from the postwar age of conformity and Hi-Fi, rather than the period of flappers and bathtub gin. 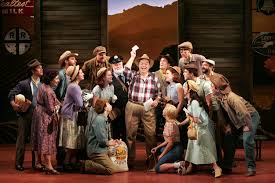 The cast of Goodspeed’s “The Most Happy Fella,” singing the title number. (Photo by Diane Sobolewski)

“It’s not something I normally do, change a time period,” Ruggiero says. ” It was something that I thought a lot about and vetted a great deal with my creatives [including scenic designer Michael Schweikardt, costume designer Thomas Charles LeGalley, wig and hair designer Mark Adam Rampmeyer, choreographer Parker Esse and music director Michael O’Flaherty]. The original play, the source material, is supposed to be 1920s. I started with working on the design and listening to the score over and over again. It’s not something I do haphazardly or recklessly. It spoke to me that way. Looking at Jo in the original production, [her look] had a very ’50s flavor to it. The only thing I changed related to 1927 was a line that I cut, where it was said, ‘I taught them the Charleston.'”

The Most Happy Fella’s pit at the jewelbox Goodspeed Opera House has seven players in it. The reduced orchestration is by Dan DeLange. The original production had 36 players. To accommodate them, the pit at Broadway’s Imperial had to be physically expanded before the show opened there in ’56, according to daughter Susan Loesser’s fascinating, candid memoir, “A Most Remarkable Fellow: Frank Loesser and the Guys and Dolls of His Life.” 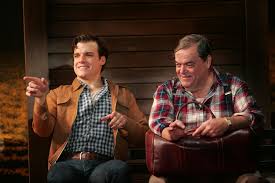 Ruggiero says that as a director he always looks for the truth — not just the fun and flash — in characters and relationships: “You can give people a lot of frosting but eventually they’re gonna get sick and not want it — or not really appreciate the experience of it. But if you put cake with the frosting — people want cake with their frosting. That’s my mantra. You still have to have story and relationship in there.”

Ruggiero’s career is solidly split between directing plays and directing musicals. Does one form color the other? He explains, “The fact that I do musicals gives me a kinetic, rhythmic musicality that I bring to the plays that makes them better. And because I work on a lot of plays, I treat musicals as musical plays. We did not start staging The Most Happy Fella until the end of the first week of rehearsals. We didn’t go up on our feet. I did table work, I did scene work. When we did get up, they got it pretty quickly because they knew who they were — they knew what they wanted.” 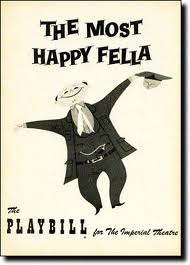 One reason for that is the Loesser property’s lack of a film version. Also, I can’t help wonder, from a marketing point of view, if the title itself was a problem; it’s optimistic and positive, but it’s hardly a “grabber.” What does “most happy fella” mean to an audience seeking entertainment? Who is he? And does the title immediately convey what many ticketbuyers want — a love story, music, romance? (The words My Fair Lady suggest a love story.) Would changing the title to Somebody, Somewhere have goosed the 1956 (and future) fortunes of Loesser’s most ambitious show? Who knows? Would Darling of the Day, The Gay Life and Goldilocks — all boasting wonderful scores that you should know, by other songwriters — have done better with different titles? (Then again, how to explain the success of titles like Brigadoon, Finian’s Rainbow and Pippin?)

The Most Happy Fella is doing fine on its own with the title it has, entering the opera-theatre repertoire (New York City Opera produced it twice — in 1991 and 2006). Goodspeed’s intimate production proves that it’s still a robust, living, breathing creature in regional theatres, even if it doesn’t get revived as often as My Fair Lady.

I was heard on BroadwayRadio.com’s “This Week on Broadway” program earlier this month, adding lots of “ums” and “uhs” while chatting about The Most Happy Fella and several other shows. If you’re a fan of podcasts, check it out. 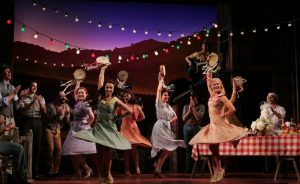 The cast of Goodspeed’s “The Most Happy Fella.” (Photo by Diane Sobolewski)