Aloha! Jeff Talbott’s “The Gravedigger’s Lullaby” Gets Hawaii Premiere By The Actors’ Group 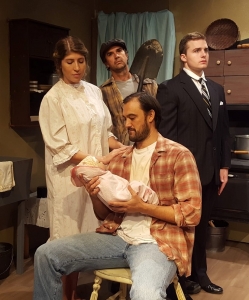 The company of the Hawaii premiere of “The Gravedigger’s Lullaby.” L-R Mor Ben Haim as Margot, Danny O’Brien as Gizzer, Grey Buxton as Charles and (seated) Antonio Anagaran as Baylen. (Photo by David Paul Starr)

The four-actor play — about a poor gravedigger who has a potentially life-changing encounter with a rich man’s son — was first seen in an Off-Broadway production by TACT/The Actors Company Theatre. It’s published by Dramatic Publishing.

Here’s how TAG bills the play: “Baylen is a gravedigger, a working-class man trying to keep food on the table in a world where other people make the rules. His wife, Margot, helps to make ends meet by doing laundry, but they’re slipping further behind with each passing minute. The extremity of their situation is being further challenged by the new baby who cries and cries, night and day. But still Baylen goes on, digging one hole at a time for the pennies he brings home, trying to keep his family afloat.” 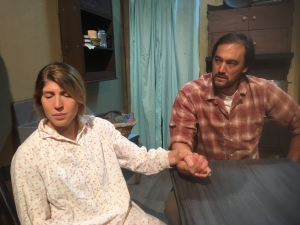 Mor Ben Haim as Margot and Antonio Anagaran as Baylen, the hardscrabble married couple in “The Gravedigger’s Lullaby.”

Jim Aina directs the Hawaii production featuring Antonio Anagaran as Baylen, Mor Ben Haim as his wife Margot, Grey Buxton as the town’s wealthy scion Charles and Danny O’Brien as fellow gravedigger Gizzer. Read my 2015 Q&A with Talbott on the topic of The Gravedigger’s Lullaby, which at the time was being tested in a developmental reading prior to its 2016 world premiere.

Playwright Jeff Talbott won the 2012 Outer Critics Circle John Gassner Award for New American Play for his breakout play The Submission, for which he also won the inaugural Laurents Hatcher Award for New Plays. His new mysterious future-set romance, i, had its world premiere by Pioneer Theatre Company. Civics and Humanities for Non-Majors, his college-set ensemble drama featuring college-age characters has been getting produced by university theater departments, including a recent staging by Utah State University. (You can find the full script at New Play Exchange.) 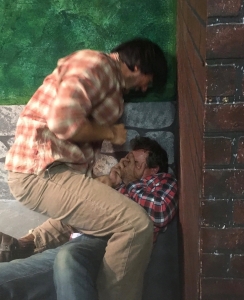 Fellow gravediggers played by Antonio Anagaran and Danny O’Brien in a dust-up in “The Gravedigger’s Lullaby.” (Photo by David Paul Starr)

TAG’s The Gravedigger’s Lullaby plays Thursdays through Sundays at The Brad Powell Theatre in The Shops at Dole Cannery, 650 Iwilei Road, Suite 101, Honolulu, HI. Visit taghawaii.net for tickets and information.

According to its mission statement, the not-for-profit TAG-The Actors’ Group “fills a unique niche in Honolulu’s theatre community by staging productions in an intimate setting with a passion and commitment to excellence and diversity.” TAG’s 2019-20 season also includes Stephen Karam’s Sons of the Prophet, John Patrick Shanley’s Outside Mullingar, Katori Hall’s The Mountaintop and David Lindsay-Abaire’s Kimberly Akimbo.