“Alabama Story” Will Get Washington, D.C. Premiere in March 2018 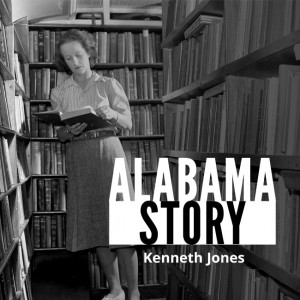 A bullying politician and formidable lady librarian are going to clash in the nation’s capital in 2017-18. Washington Stage Guild, the resident DC company known for presenting “literate, challenging works,” will produce the area premiere of Kenneth Jones’ Alabama Story in spring 2018. The fact-based drama’s central character — a state librarian under fire for protecting a children’s book in the segregated Montgomery of 1959 — would later work for the Washington, DC, library system and the Enoch Pratt Free Library in Baltimore.

Casting will be announced at a later date. Here’s how WSG bills the play: “A librarian in segregation-era Alabama purchases a new children’s book — ‘The Rabbits’ Wedding’ — for the library, but the seemingly innocent wedding draws the attention of a grandstanding, intolerant state senator who leads a crusade against the book.” 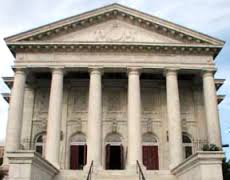 The Undercroft Theatre is located within the Mount Vernon Place United Methodist Church in Washington, DC.

The six-actor Alabama Story touches on Civil Rights and censorship issues in “the Deep South of the imagination.” The drama blends historical and fictional characters. Garth Williams, famous for illustrating “Stuart Little,” “Charlotte’s Web” and “Little House on the Prairie,” wrote and illustrated a book about a black rabbit who marries white rabbit. Alabama state librarian Emily Reed is confronted by segregationist state senator E.W. Higgins (based on real politician E.O. Eddins), who seeks its removal from state libraries. The innocent book is viewed as a tool to brainwash children into embracing race-mixing. The senator wishes to see the book burned. (2018 marks the 60th anniversary of the publication of “The Rabbits’ Wedding” by Harper Bros., now HarperCollins. The book is still in print.)

In addition to charting the true story of the librarian and the lawmaker, the two-act Alabama Story explores the fictional story of childhood friends, Joshua and Lily — an African-American man and a woman of white privilege, reunited in adulthood in Montgomery that same year — providing private counterpoint to the public events of the play. 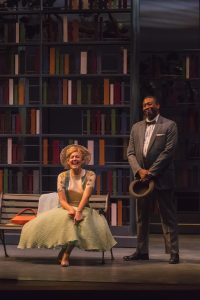 The play about Civil Rights, censorship, artistic freedom and the right to read — to say nothing of the clash of the personal and the political — was a 2016 nominee for the Steinberg/American Theatre Critics Association New Play Award. It was a finalist in the O’Neill National Playwrights Conference in 2014.

The play premiered in a 2015 staging by Pioneer Theatre Company in Salt Lake City, where artistic director Karen Azenberg directed. (Read more about the play’s goals and production history here.) By spring 2018, it will have been seen in at least 14 cities around the nation, including Sioux City, San Jose, Austin, Knoxville, Sarasota, Asheville and beyond. (Request a script here.)

Playwright Kenneth Jones characterizes Alabama Story this way: “It’s a romance, a political thriller, a memory play, a workplace drama, a tearjerker, a comedy, and a discussion about race, censorship and American character. All of it has a hint of Thornton Wilder to it, as author Garth Williams serves as a kind of narrator and protean participant. Most important, it’s a play about how we behave when we face terrible circumstances — how character is revealed in times of transition, change and crisis.” 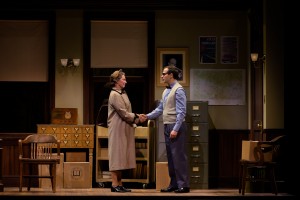 Florida Studio Theatre artistic director Richard Hopkins, himself a Southerner, called Alabama Story “probably the best Southern play I’ve read in 10 or 20 years.” The play was a hit for FST in Sarasota in spring 2016. Listen to the WDET/NPR interview with the playwright.

Librarian Emily Wheelock Reed died of heart disease May 19, 2000, at the Broadmead retirement community in Cockeysville, MD. After the events charted in the play, she became coordinator of adult services for the DC library system for six years, then moved to Baltimore, where she was coordinator of adult services at the Enoch Pratt Free Library until she retired in 1977. Read the Washington Post obituary.

Founded in 1986 by a professional company of theatre artists dedicated to producing, Washington Stage Guild is devoted to “neglected classics, unfamiliar works by familiar playwrights, and stimulating new plays from around the world is presented in a style that is the Guild’s own — direct and clear, with a strong commitment to adhering to the author’s intent.” Its 2017-18 season also includes Widowers’ Houses by George Bernard Shaw, A Child’s Christmas in Wales & Other Stories adapted by Bill Largess and See Rock City by Arlene Hutton. Bill Largess is WSG’s artistic director. Ann Norton is executive director.