“A Public Education,” Jeff Talbott’s Pulse-Taking of Teachers, Gets Out of Box Staging in Georgia 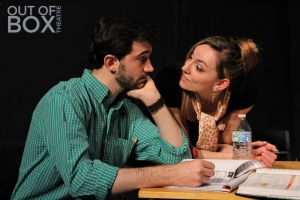 Shaun MacLean and Bryn Striepe in “A Public Education” at Out of Box Theatre in Marietta, Georgia.

Out of Box Theatre, the Marietta, Georgia company devoted to contemporary plays and musicals in an intimate setting, is giving Jeff Talbott’s six-actor play A Public Education a full production May 10-19, 2019. The playwright is on hand for the opening weekend to give a listen to his latest draft, which represents changes since earlier development of the play by Pioneer Theatre Company and Off-Broadway’s TACT/The Actors Company Theate.

In the Atlanta area, Out of Box associate artistic director Zip Rampy directs Talbott’s peek inside the faculty lounge of an American high school — exploring, among other things, teachers’ personal and professional passions, weaknesses and the reasons one chooses such a career. The Georgia cast features Shaun MacLean, Amanda Cucher, Bryn Striepe, Mia Kristin Smith, Zach Kuebler and Bob Smith.

“I’ve always wanted to write something with educators at the center of the story,” Talbott previously told me. “I have many educators in my life — family and friends — and I think their job is extraordinarily difficult and awe-inspiring.” 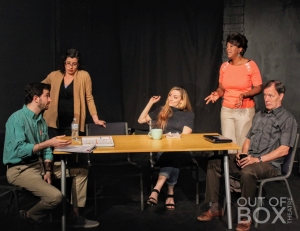 A teachers’ lounge scene from Out of Box Theatre’s “A Public Education.”

Here’s how Out of Box bills A Public Education: “Luke Paxton [Shaun MacLean] is a high school math teacher and the new guy in the faculty room.  He’s ready to teach, but completely unprepared for the other teachers; not to mention the nasty things somebody’s been posting on the web. Based on interviews with dozens of teachers working today, A Public Education puts you right into the trenches with five complicated, deeply human teachers and one troubled student. Welcome to high school, where an education comes in ways you can never see coming.”

Next up for the company is the musical Working. Carolyn Sheppard Choe is artistic director of Out of Box Theatre. 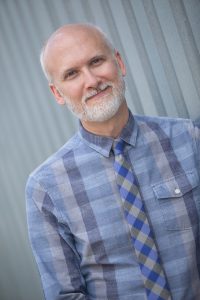 Talbott, a New York City-based actor and writer, said in earlier program notes about A Public Education: “I have many friends and family members who are educators, and doing their difficult job well is one of the true heroic efforts at work in our society today.  Much has been written about how beleaguered they are, and with good reason; they are set upon from seemingly every side:  low pay (which we can’t seem to fix), high expectations (from parents, from students, from themselves), and a sometimes impenetrable system to navigate just to get to the kids.  A couple of years ago, I interviewed several dozen educators in an anonymous survey to get as much candor as possible, and then looked at their informative and fantastic responses and tried to figure out how they fit into a play.  As I don’t know what I have to offer on the system itself, I took their responses and used them as ballast to give a workplace story both authenticity and inspiration, and began to explore our current fascination with the apparently bottomless plethora of anonymous opinion to be found on the ever-expanding world wide web.  A Public Education is the little story I found begging me to help it find voice.  I love these teachers and this kid; hopefully I’m doing them justice.”

Read my earlier interview with Talbott, in which he talks about the roots and goals of the play.

Talbott graduated with honors from the Yale School of Drama. His play The Submission was the inaugural recipient of the Laurents/Hatcher Award in 2011 and was produced Off-Broadway by MCC Theater; it also received the Outer Critics Circle John Gassner Award for Outstanding New American Play in 2012. His latest four-actor play Joseph Cook is a 2019 Finalist in the O’Neill Theater Center’s National Playwrights Conference. His play The Gravedigger’s Lullaby got its world premiere by TACT and is licensed through Dramatic Publishing. Pioneer Theatre Company in Salt Lake City gave his medical mystery i its world premiere in 2018.

Learn more about the work of Jeff Talbott at his website, jefftalbott.com.