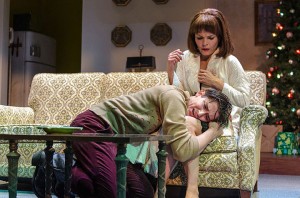 The first great discovery of the 2013-14 Off-Broadway season, TACT/The Actors Company Theatre’s Natural Affection by William Inge, expertly directed by Jenn Thompson, is bait for those of us passionate about exploring the full range of a specific playwright’s voice and canon.

A dark, urban departure from Pulitzer Prize winner Inge’s “small town” plays like Bus Stop, Picnic and Come Back, Little Sheba (which all have their own streaks of blackness), Natural Affection features a central character who is surely one of the most complex women in American stage literature. Her name is Sue Barker, and watching TACT’s rare and revelatory  production prompts you to think, Where has she been hiding all these years?

Sue (played by Kathryn Erbe in TACT’s production at the Beckett Theatre) is a single mother and career woman who put her child, Donnie, in an orphanage during hard times and later retrieved him when he was adolescent. Wild and undisciplined, Donnie (played by Chris Bert) was arrested and sent to a “work farm,” from which he has been temporarily sprung at the top of the play, set at Christmastime 1962 (Madonna and child tension noted).

Kathryn Erbe as Sue and Alec Beard as Bernie in “Natural Affection.” (Photo by Marielle Solan)

Sue, now a rising buyer at a Chicago department store, uneasily makes room for Donnie in the apartment she shares with an attractive serial loser, Bernie Slovenk (played by Alec Beard), a selfish opportunist with whom she is wildly compatible in bed. Sue has one foot in the feminist era of aspirational working women and the other in the world of post-war conformity, when women were programmed to be married homemakers and mothers. (Interesting, too, that Sue is a self-made woman: she rose from waitress to buyer, but still wants the legitimacy of marriage.)

Sue is living a life in which she is virtually torn in two, but she doesn’t fully know it until play’s end. Donnie’s an imperfect kid, Bernie’s unreliable, and Sue doesn’t have a grasp on what she wants — or what she can handle — in the world. An act of violence is the result, part of a chain of violence that you suspect has always been in the lives of these characters. (Inge threads references to car wrecks, fistfights, sexual violence and corporal punishment into the script.) 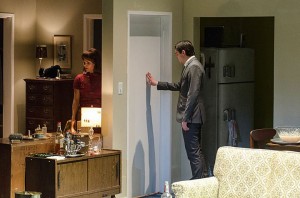 Kathryn Erbe and Chris Bert as mother and son in “Natural Affection.” (Photo by Marielle Solan)

Inge was playing with new colors in Natural Affection — seriously growing as an artist, at age 50 — and his portrait of the city as an alienating and negative force was prescient. Rising crime, sexual freedom, decaying urban centers and the blurring of gender roles would all be part of the swirl of the 1960s, and that’s all here. A decade of dread has begun, and Sue feels it all the time. A “troubled feeling” robs her of sleep. At the top of the play she peers out her window at the city and observes, “Standin’ here, lookin’ out at the world…God, it looks ugly at times.”

Despite a newspaper strike that helped lessen the play’s exposure and potential fortune, the reviews that surfaced in 1963 dismissed the play as melodrama. Some observers found its violence distasteful and its sexuality too frank. The play disappeared, though it was published and has enjoyed some regional revivals. This marks its first professional New York City staging in 50 years.

Inge killed himself a decade after Natural Affection flopped on Broadway. In his centennial year, it’s time to embrace his orphan and hold it up to the light. 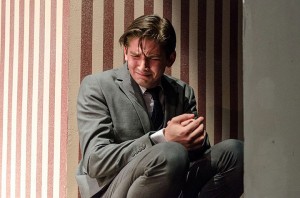 Here’s how TACT bills the play: “A startling love triangle, that tests the ties that bind. A troubled young man who, abandoned early in life by his single mother, returns from reform school to find her now living with a lover. As the tension between them mounts, their fight for forgiveness and connection gives way to desperation, setting this insecure family on a collision course of reckless, heartbreaking, and almost inevitable violence.”

TACT is presenting “Talkbacks” with the director and cast following every Sunday matinee, plus a series of discussions featuring guest speakers. Here’s how TACT characterizes its guest-speaker “Surround” events:

VIOLENCE AND THE 1960S: NATURAL AFFECTION IN THE CONTEXT OF PLACE AND TIME: A CONVERSATION WITH GIGI BOLT AND JACKSON BRYER

In his preface to the published text of Natural Affection, William Inge wrote, “In my play, I wanted to expose some of the atmosphere in our lives that creates violence.” Both chronicler and seer, Inge depicted and foreshadowed the yearning, confusion, anger and brutality that burst forth in the 1960s amidst rapidly shifting societal forces. Some of the battles in Natural Affection are physical, while others are of the heart and psyche. The play, which was met with consternation in its time, stands today as a striking reflection of Inge’s unwavering truthfulness and extraordinary moral and spiritual insight. 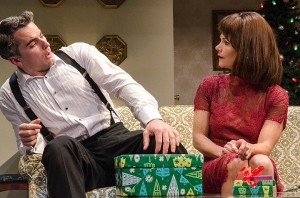 Kansas native Gigi Bolt, former Director of Theatre and Musical Theatre at the National Endowment for the Arts and currently Adjunct Professor at Columbia University, and Jackson R. Bryer, Emeritus Professor of English at the University of Maryland and Director of the Conference segment of the annual William Inge Theatre Festival, will discuss how Natural Affection reflects its time and place even as it presaged the future.

THE TRIUMPHANT BUT TROUBLED LIFE OF WILLIAM INGE: A CONVERSATION WITH CHRISTOPHER BRAM

To the outside world, William Inge was one of America’s most popular and celebrated playwrights, with plays such as Come Back Little Sheba, Picnic, Bus Stop and The Dark at the Top of the Stairs. Plagued by inner demons, however, he struggled with alcoholism and homosexuality, weaving many of his emotions and feelings into his work up until his death by suicide in 1973.

Join New York University writing professor and celebrated author Christopher Bram (“Eminent Outlaws: The Gay Writers Who Changed America,” as well as “Father of Frankenstein,” the book that was made into the Academy-Award winning movie “Gods and Monsters”) as he discusses Inge’s contributions to the theatre, as well as the explicit and implicit themes of many of his works, including Natural Affection. 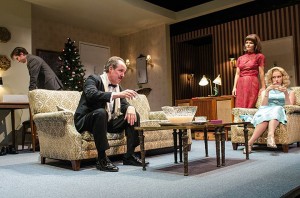 THEATER CRITICISM IN THE DIGITAL AGE: A CONVERSATION WITH WILLIAM WOLF

If a play opens on Broadway and nobody knows it, what are its chances of success? That’s the unfortunate situation faced by Natural Affection when it opened in January 1963 in the middle of a four-month-long newspaper strike in New York City that ultimately contributed to the play’s brief run.

Thanks to ongoing advances in communications and technology, no such similar blackout is likely today. Learn about the rapidly changing landscape of entertainment media — and in particular the rise of theater criticism on the Internet — in a wide-ranging conversation with William Wolf, a noted critic, author, journalist and lecturer. Wolf currently publishes the web-based Wolf Entertainment Guide, teaches film courses at New York University and was formerly the film critic for the Gannett newspaper chain, a critic and contributing editor for New York Magazine and a film critic for Cue Magazine.

THE LIFE AND WORKS OF WILLIAM INGE: A CONVERSATION WITH PETER ELLENSTEIN AND MIKE WOOD

A Pulitzer Prize-winning playwright whose name is often mentioned alongside other literary giants of the 20th century such as Tennessee Williams and Arthur Miller, William Inge left behind a substantial body of work that continues to resonate in a powerful and personal way with audiences today. 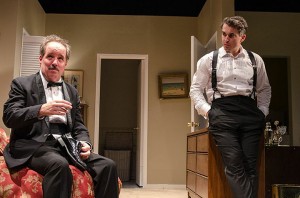 Learn more about Inge’s life and work from two people who are uniquely qualified to talk about his personal and artistic legacy — Peter Ellenstein, artistic director of the William Inge Center for the Arts in Inge’s hometown of Independence, Kansas, which sponsors the annual William Inge Theatre Festival; and Mike Wood, executive director of Wichita State University’s Media Resources Center, who has produced two live multimedia documentaries on William Inge, and many other documentaries about playwrights.