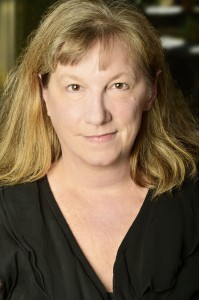 The harsh and unforgiving landscape of the Antarctic region is the world of The White Road, playwright Karen Tarjan‘s charting of the tragic trek of Irish-born explorer Ernest Shackleton, whose ship was famously crushed by ice, forcing a frigid odyssey for leader and crew. Irish Theatre of Chicago is giving the ensemble drama its world premiere April 30-June 13.

“The play takes place between May of 1914, with the announcement of the Imperial Trans-Antarctic Expedition and the hiring of the crew, to August of 1916, with the rescue of men stranded on Elephant Island,” Tarjan told me. “[It’s] definitely an ensemble piece about ten very down-to-earth guys, funny guys. The sensory and fantastic qualities are being brought to life by the awesome designers.”

The setting is not technically the South Pole or Antarctica, but the Weddell Sea, part of the Southern Ocean.

Here’s how the company bills the work: “The White Road is the story of Ernest Shackleton’s ill-fated attempt to cross Antarctica from sea to sea via the South Pole. The crew is forced to abandon their ship, The Endurance, having been crushed by pack ice.  They have one path ahead — The White Road. Experience an incredible story of survival, under near impossible conditions, and a display of the strength of the human spirit when all hope appears lost.” 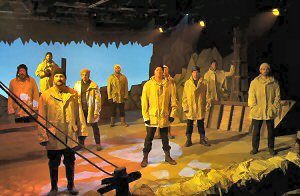 Karen Tarjan is a founding member of Seanachai Theatre (now called Irish Theatre of Chicago) and performed in many of its productions, including And Neither Have I Wings to Fly, The Clearing, Chekhov in Yalta, Translations, Marked Tree, The Pagans and Dylan. Her adaptations of The Overcoat, The Two Towers (with James Sie), The Return of the King and The Killer Angels were all produced at Lifeline Theatre. This is her first original script. 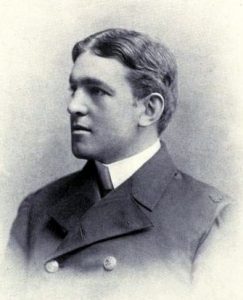 Shackleton and his crew sought to cross Antarctica, launching from the Endurance, but the ship sank after ice crushed its hull. Shackleton’s party camped on ice and then took a skiff to rescue. Is this the action of the play, or is his past and future life inked-in, as well?

Karen Tarjan: Your description is accurate in broad strokes — there was a lot more adventure in between, all of which I was able to highlight in the script. I didn’t include back story on any of the characters and they rarely talk about their past lives — there’s plenty of story to tell in the present. Shackleton [played by Paul Dunckel] writes to his wife on two occasions and Blackborrow [played by Gage Wallace] writes to a fictional school-mate. Some of the characters talk about what they intend to do in the future and I used this device as a way of showing that believing that there is a future is an important survival mechanism. Also, to show what the historical personages did indeed do in the future. Blackborrow gets married. Wild [played by Michael McKeogh] becomes a farmer. Crean [played by Matthew Isler] opens the South Pole Inn. Almost all of the real guys were involved in some way in World War I upon their return. Vincent [played by Steve Walker] does indeed get torpedoed in Turkish waters and McNeish [played by Steve Herson] does indeed get assigned to Finland. 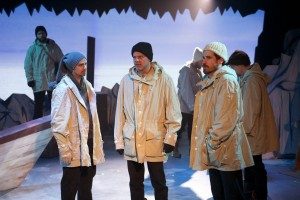 L-R, Matthew Isler, Paul Dunckel and Michael McKeogh with the cast of “The White Road.” (Photo by Jackie Jasperson)

What attracted you to the story of Ernest Shackleton? When did you first encounter this story, and what spoke to you “theatrically”? That is, did an image or conflict come to mind that said, “This is a play.”

Karen Tarjan: I saw some of [Australian photographer Frank] Hurley’s [played by Neal Starbird] photographs of the dogs and did some digging to find out more about the dogs. …This story seemed like a great fit for us. Epic in scope but with characters that the audience can really root for and a thrilling plot where you can’t wait to find out what happens next.

Beyond the fact that Shackleton was born in Ireland, what makes the play and the story a fit for your ensemble and Irish Theatre of Chicago’s ethic?

Karen Tarjan: One of Irish Theatre of Chicago’s early taglines was “There’s nothing better than a good story.” This is one hell of a good story about people who use humor and music and entertainment to rise above adversity. 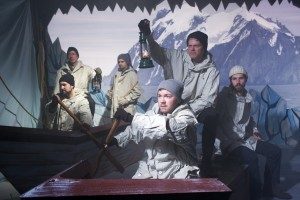 What sort of research did you do for the play? Do you draw from Shackleton’s words, or do you dip into your imagination?

Karen Tarjan: I avoided any dramatizations of any part of this story and relied on several books: biographies of Shackleton, Crean and Worsley, first-person narratives by Shackleton and Worsley, books by Alfred Lansing and Caroline Alexander, and the megaton of written and video material on the internet. Also the “Chasing Shackleton” documentary from PBS and Tim Jarvis’ book about the making of that documentary. Orde-Lees [played by Joseph Stearns] was a detailed journalist and I used pieces of his narrative to inspire many of Joe’s narrative lines.

Can you share a little bit about the visual world of the play, and the conversation you had about that with your director and designers? The stark monotone of the Antarctic landscape would seem to pose a challenge.

Karen Tarjan: I didn’t have any conversations with the director and the designers about what I expected the visual world to be. They were free to interpret the script in any way they wanted. The director presented his concepts and I could have argued in favor of one way or another, but I was delighted with what he was intending to do. The set, projection, lighting and costume designers have created a rich environment in spite of the limited palette. The sound designer has created a vibrant aural landscape to suggest everything from the wildlife the men encounter to the crashing of waves and the breaking of iceberg. She has also composed glorious original music and even choreographed a tap dance. Where might a tap dance fit in? Come see the show and find out. 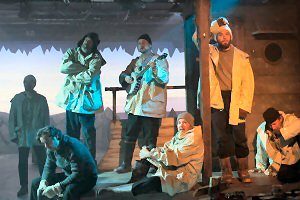 Is it useful to dramatic structure that you could use the events of Shackleton’s life as dramatic guideposts?

Karen Tarjan: Absolutely. One of my adaptations was of Michael Shaara’s The Killer Angels, a fictional account of the Battle of Gettysburg. I like to think that if Michael Shaara had written a novel about Shackleton and the Endurance, this play would be like an adaptation of that book — with my own dialogue, of course.

What sort of development did The White Road have — readings, workshops?

Karen Tarjan: I held an informal reading in my living room in February of 2014 and invited actors that I had worked with in the past. Robert Kauzlaric read the role of the Australian photographer, Frank Hurley. Rob wrote me later that night and expressed interest in directing the show! A week or so later, Michael Grant, the co-artistic director of ITC (who read the role of Shackleton) wrote to say he wanted to consider producing The White Road for their 20th anniversary season. Things fell into place and we did one final reading before the show went into rehearsal. Rob and I met on two occasions during the preparation process to discuss changes to the script, which I later implemented. I’ve also been trimming and tightening throughout the rehearsal process.

A monument to Ernest Shackleton erected by the Royal Geographical Society.

For the uninitiated, what does the title refer to?

Karen Tarjan: From “The Wasteland” by T.S. Eliot. This is what Eliot said about his inspiration: “The following lines were stimulated by an account of one of the Antarctic expeditions (I forget which, but I think it was one of Shackleton’s): it was related that the party of explorers, at the extremity of their strength, had the constant delusion that there was one more member than could actually be counted.”

Who is the third who walks always beside you?

When I count, there are only you and I together

But when I look ahead, up the white road

There is always another one walking beside you.

Shackleton, Crean and Worsley all saw a fourth man during their crossing of South Georgia Island but did not speak of it to each other until later. This same “delusion” has been experienced by many others in the midst of desperate survival struggles. There are several explanations for this phenomenon but I interpret it as a survival mechanism that the human brain calls upon when the body has nothing left to give. In the play, when the men experience the presence for the first time, they feel fear, anger and confusion, but soon see the presence as a focusing and encouraging being. 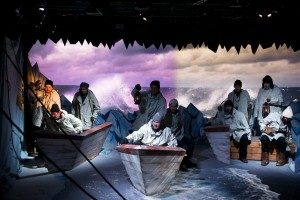 L-R, The company of Irish Theatre of Chicago’s world premiere production of “The White Road.” (Photo by Jackie Jasperson)

You’re a founding member of Irish Theatre of Chicago. Was the play written with a few specific actors in mind?

Karen Tarjan: From the very beginning, I thought ensemble member Kevin Theis would make a great Worsley. Luckily, Rob [Kauzlaric] thought the same. Kevin auditioned and was cast on the spot. I can’t say I wrote the part with his voice in mind as I had never heard Kevin speak in a New Zealand dialect. It was more his presence and energy. I think of Worsley as being cocky and charming.

I wrote a few other parts with specific actors’ voices in mind, but they were unavailable. Luckily, the Chicago talent pool is really a talent ocean. The auditions were great and we had a tough time narrowing down the wealth of choices. 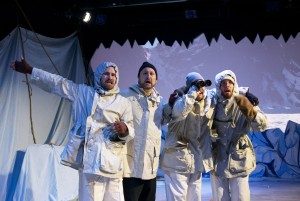 You began your theatre career in acting? When did you start becoming a dramatist? Are you both, still?

Karen Tarjan: I’d been an actor since college — class of ’81. My first play was an adaptation of Gogol’s The Overcoat, which was produced by Lifeline Theatre in 1997. The script was written as a movement piece and much of the dialogue was Russian gibberish. I like to think I’ve become better at writing dialogue.

Do you have Irish roots?

Karen Tarjan: My great-grandparents on my father’s side were born in Ireland. I didn’t know them, but I have a Tara Brooch that belonged to my paternal grandmother. She was a tiny powerhouse. She got a master’s degree in Chemistry in the early ’30s.

Share a little bit about where you grew up? What was your exposure to theatre as a kid? Are there artists in your family?

Karen Tarjan: I grew up in Easton, Pennsylvania, and was always involved in plays and musicals at school and at camp. My older brother and my younger sister were better singers than I was and got the leads in the shows sooner than I did, but I was the only one who kept up with it as an adult. I was a theatre major at Mount Holyoke College.