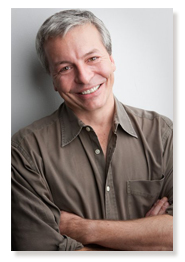 The reading is a first-listen opportunity for the playwright, who is known for Off-Off-Broadway plays chronicling experiences of gay characters around the time of modern gay rights and the AIDS epidemic (We Were There, Lonely Too Long and I Could Say More). Blasius now looks back at a shadowy time that coincided with his own coming of age in the late 1970s.

He bills Victim this way: “On a September night in 1977, after the July blackout and the August capture of the Son of Sam, two men meet at the Badlands bar at the foot of Christopher Street in New York City’s West Village. In the morning, one of them is dead. Is he a victim of the serial killer who’s been dismembering men and dumping their remains in the Hudson River? Randy, a detective, has gone undercover to find out. And Arthur, a gossip columnist, has been contacted by the killer who wants to tell his side of the story. As Arthur introduces Randy to the West Village demi-monde, the dance of death between the two strangers who met for a one night stand reaches its fatal conclusion.”

The idea for the play started after Blasius found out that a man who had a bit part in William Friedkin’s movie “The Exorcist” subsequently became a convicted killer who had confessed to a series of murders of gay men. These killings, in which men were dismembered, put in trash bags and tossed in the Hudson River, helped inspire the film “Cruising,” also directed by William Friedkin.

Blasius explained, “A search led me to the fact that the killer, prior to his arrest, confessed to Arthur Bell, who was a gossip columnist for the Village Voice and had also written a series of articles about the murders of gay men in the West Village. Bell subsequently spearheaded the famous protests that attended the filming of ‘Cruising.'”

Blasius, an actor, director and dramatist, is associate artistic director of Other Side Productions. As a director he staged Peter Mercurio’s Andrew Reaches the Other Side, Red and Tan Line and Two Spoons; Eric Bernat and Robin Carrigan’s Jesus and Mandy; John Alban Coughlan’s Of Lives and Leaves. As an actor he appeared in Ken Nintzel’s productions of Pansy Acts, Piano Bar, Sonata Da Camera Obscura, Lapse and Twas the Night; and Grant James Varjas’ Accidentally, Like a Martyr (Paradise Factory). He is a member of the Dramatists Guild and a graduate of New York University’s Tisch School of the Arts.