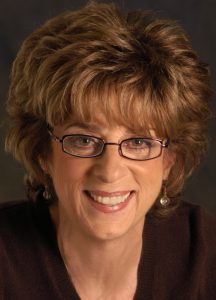 Kitty Dubin’s Rights of Passage, a grouping of short plays addressing momentous events in the lives of disparate Jewish characters, is getting its world premiere by JET — Jewish Ensemble Theatre — in metropolitan Detroit Oct. 20-Nov. 13. Life, love and loss are in the mix in this latest work by Dubin, who has had her finger on the pulse of anxious, yearning upper- and middle-class American characters for more than 20 years in plays at JET and beyond. This is her seventh comedy drama to premiere at JET in West Bloomfield, Michigan.

She shared some thoughts with me about her new work and her career. 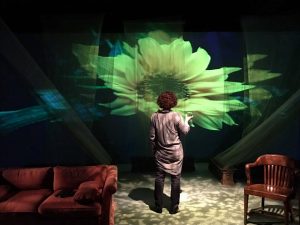 Jamie Warrow in a scene from the world premiere of “Rights of Passage.”

Dubin’s plays include The Blank Page, Coming of Age, The Day We Met, Change of Life, Dance Like No One’s Watching and The Last Resort, among others. Her work has also been produced by Purple Rose Theatre Company, BoarsHead, Live Oak Theatre in Austin, Texas, The American Globe Festival, Heartlande Theatre, Tipping Point Theatre, Boxfest Detroit and The Vitality Festival in Chicago. Dubin was named Playwright-in-Residence at the JET in 2006 and has also served as a dramaturg on several new productions. She has received two individual artist grants from the Michigan Council for the Arts as well as a Jewish Woman in the Arts Award for her body of work over the past 25 years. She is a lecturer at Oakland University where she teaches classes in beginning and advanced playwriting.

Get ticket information about JET’s world premiere of Rights of Passage. 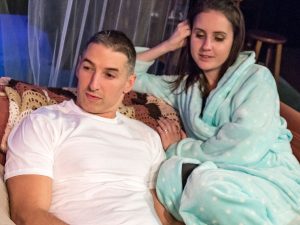 Michael Brian Ogden and Meredith Deighton in the Michigan world premiere of “Rights of Passage.”

I love the one-act form, but short plays rarely find a home. They tend to be the orphans of the theatre world — not seen as financially viable or dramatically “substantial” enough. Grouping them together is a great idea. What were the seeds of Rights of Passage?

Kitty Dubin: I wrote two one-act plays — one about a bris and one about a shiva. Then I realized I could have an evening of short plays that all explored Jewish rites of passages. Equal parts comedy and drama, these five short plays explore the defining moments in the journey of life. This play is all about the difficulties and struggle of accepting change. Yes, I would like to clarify why I titled the play “Rights” not “Rites of Passage.” None of the plays actually deal with the particular rite of passage. For example, there is no bris, no bar mitzvah, no wedding, no funeral. The protagonists of each play are not who you think they might be. And the protagonists in each play are fighting for their “rights.” The title becomes clear as one sees the play.

What sort of development did the play(s) have?

Kitty Dubin: Quite a bit. Last October [2015], I had a reading at the JET and a reading at a private home sponsored by JET. Afterwards there were talkbacks and I rewrote from there. I would also bring the play at different stages to my playwrights’ group for feedback. I am continually revising right up until opening night. Mostly cutting lines that don’t need to be there. During rehearsal, I did a lot of tweaking, but nothing major. My director and I met over the summer and we went over the script line by line and he suggested certain changes that I incorporated. 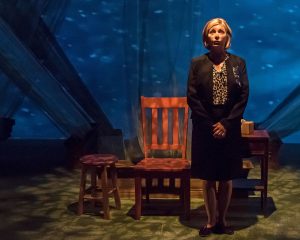 Julia Glander in the world premiere of Kitty Dubin’s “Rights of Passage.”

Did you write any one-acts for this grouping that didn’t make the cut?

Kitty Dubin: There was one play we decided to cut from the reading because it didn’t really fit into the theme. I had been trying to shoe horn it in, but finally admitted to myself that it just didn’t belong.

Your plays have been produced in Michigan and elsewhere for 25 years. What did you lack as a dramatist back? In what way are you better?

Kitty Dubin: I tended to overwrite in my earlier plays and now I love getting rid of even one extraneous word! I like everything to be absolutely essential.

You teach playwriting at Oakland University. Are there dramatic rules or guidelines that you teach that you yourself have broken?

Kitty Dubin: I actually stick very close to what I teach — which is traditional structure. For me, that means one protagonist who goes through a journey of change, who has a very strong goal, and faces considerable obstacles. 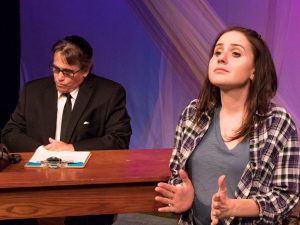 Fred Buchalter and Meredith Deighton in “Rights of Passage.”

Can you say in a nutshell what kind of character or world you write about?

Kitty Dubin: Not sure how to describe the world of a Kitty Dubin play, but the most common words people use to describe my plays, are “relatable, real, touching, poignant and funny.” These are real people going through relatable and real situations.

How has your career as a psychotherapist informed your plays?

Kitty Dubin: I was a psychotherapist for 26 years but left my practice 20 years ago to teach beginning and advanced classes in playwriting at Oakland University. Being a therapist seems like a lifetime ago, even though it was helpful and still is to my writing process.

Does a version of you tend to surface in your plays?

Kitty Dubin: Absolutely! However, I never try to recreate my own personal experiences, but I am a big believer that the gems are in our own backyards. There is a lot of me in Rights of Passage. For example, the first play Cutting It Close is about a young couple who has just had a baby boy. The mother-in-law wants the baby to have a bris (circumcision with family and friends in attendance) and the daughter-in-law is dead set against it and wants it done in the privacy of a doctor’s office. The son finds himself in the middle of his wife and mother. I had a similar experience 39 years ago!

What is your routine as a playwright?

Kitty Dubin: I don’t write every day — only when I am working on a play and then I am totally obsessed and consumed by the writing process. Everyday life plays second fiddle to what I am working on.