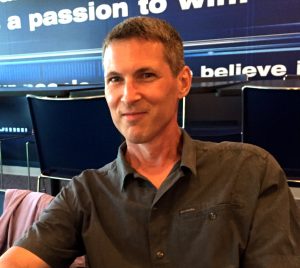 A Connecticut man has fled to the New Mexico desert following an unspeakable tragedy in Vincent Delaney’s drama Las Cruces, getting its world premiere Sept. 1-18 by Premiere Stages in Union, NJ. The Equity company’s founding producing artistic director John J. Wooten directs Brian Sutherland, Charlotte Cohn and Diomargy Nuñez. Delaney shared some thoughts about the new play from his home in Seattle, where he teaches.

Premiere Stages — which developed the play in a reading earlier this year — bills the drama this way: “Set in the New Mexico desert, not far from the casinos and the spaceport, Mr. Delaney’s enigmatic story of buried secrets, improbable friendship, and unexpected redemption follows Sheridan, a Connecticut man who has fled his life on the East Coast under mysterious circumstances, and Soledad, the wisecracking, teenage card player he befriends.” 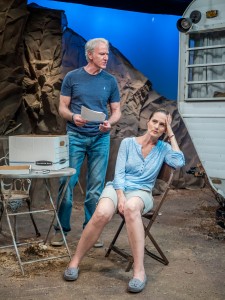 “Sheridan is running from a recent tragedy, but also from himself, and from his wife, Jane,” Delaney told me, revealing that Sheridan’s son pulled the trigger at a school shooting. “Jane is obsessed with what happened, with trying to understand, with evaluating what they must have done wrong. She’s looking for logic. He wants to find the most distant hole on Earth and dive headfirst into it. So he’s rented this trailer in the New Mexico desert, sight unseen. But the trailer isn’t empty, and there’s no real escape for him here. There’s Soledad — young, funny, living off No Limit poker in the local casinos. There’s no reason for either of them to trust the other, but somehow they go on a journey together.” 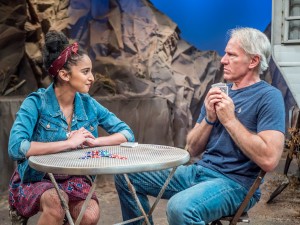 Playwright Vincent Delaney is a recipient of the Actors Theatre of Louisville’s Heideman Award, McKnight and Bush fellowships, a Jerome Commission, the Reva Shiner Comedy Award, Core Membership at the Playwrights Center, and a residency at Seattle Rep. His plays have been produced throughout the United States, and in the United Kingdom, Canada, Japan, and the Netherlands. His work is published by Smith and Kraus, Samuel French, Heineman, Dramatics Magazine, Theatre Forum, and Playscripts.com. His most recent play, Fire Station 7, will have its world premiere in 2017 at Seattle Children’s Theatre. Learn more about his work here.

Director Wooten is in his twelfth season as producing artistic director of Premiere Stages, where he has directed and produced many new plays including The Beautiful Dark, The Good Counselor and Follow Me to Nellie’s, all of which were recognized by the American Theatre Critics Association. He directed the New Jersey premieres of Rabbit Hole, Snakebit and Boy Gets Girl, along with many other plays.

Delaney’s play The Art of Bad Men, which I profiled in 2015, subsequently had productions in Seattle and Fargo, ND. It was nominated for a Gregory Award in Seattle, in the Best Play category. 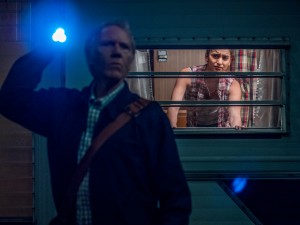 What inspired Las Cruces? What did you “see” first — a character, a place, a conflict?

Vincent Delaney: The play grew from the terror of suddenly finding ourselves expecting twins. Neither my wife nor I were quite ready for the shock of that, and it led me into quite a few late nights, thinking about how little we can know our kids, if we’re really honest about it. I started to imagine a play about a couple who really don’t know their children…and what it does to them, once they discover that essential truth. Who do we become, once we know that about ourselves?

I always saw this as a play about surviving something terrifying, but from the point of view of the parents, not the perpetrator. I knew the characters would be staring into an abyss, a mystery of how and why and what did we do wrong — and I knew from the beginning the play would never be about solving any of those questions. The premise became so exciting, because I knew we’d have to empathize with them, even though we’d probably give anything not to.

Once I began to see the New Mexico desert — glorious, magical, so quiet, and so full of secret life — I knew I was on to something with this play.

I’m curious about the significance of the remote city of Las Cruces — for the characters and for you. Why does Sheridan choose that place? Do you have any connection to Las Cruces?

Vincent Delaney: I’ve spent a lot of time in the desert — New Mexico, but also California, Arizona, other places in the West. There’s a spare magic, an astonishing quiet, and so much hidden beauty. There are fascinating juxtapositions as well: the people, the cities, a high tech spaceport, not far from Las Cruces, which figures in the action of the play. I will admit to picking the town in part because the title might suggest something about redemption, just a little bit. Or maybe just the aspiration toward it.

What sort of research, if any, was necessary for the play?

Vincent Delaney: I spent a really bleak summer with the 900-page police file on the Columbine killings. Wouldn’t care to do that again. But I think it was necessary. There’s a level of intimacy in those writings that no one should really have to experience. On the nicer side, I refreshed my poker skills, learned about SpacePort America, and got to do some extra camping in the Southwest. 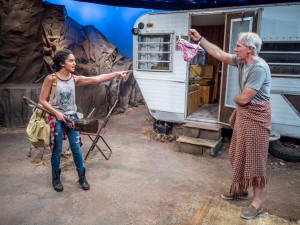 What is the specific location of the play. A trailer? How do you describe the setting?

Vincent Delaney: We’re in and around a rusted out trailer, a couple miles from the highway, not too far from the spaceport, where rocket engines are tested from time to time. It’s bleak and empty and beautiful. Kids hang out here from time to time, lighting up and making out. We also spend some time in Sheridan’s past — Connecticut, memories of parties and happiness that may not quite reflect the true past. Time is a little bit permeable, and we don’t always have a reliable guide.

Does the play allow for a conversation about issues surrounding gun violence, or is it more a character study?

Vincent Delaney: It’s not a political play, at its core. Or maybe it is. I wouldn’t really call it a character study either. I think all the characters — Sheridan, Soledad, Jane — are forced to stare into something completely unknowable, inexplicable, and it changes each of them. 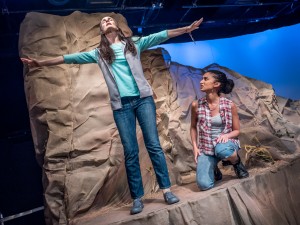 The seriousness of the world would seem to suggest a lack of humor. Is the play streaked with humor, too?

Vincent Delaney: The play never really took off for me until I discovered Soledad, who’s absolutely hilarious. Her ability to lead this square, middle-aged gringo by the nose, playing him any way she wants, gives the play so much life. Poker has turned out to be an essential part of the play, and there’s quite a bit of humor that flows from the bravado of the game.

The original idea was to write a two hander, just Sheridan and Jane. But Soledad more or less took over the play, and now I think she’s the soul of the story. 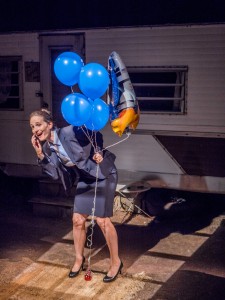 What was the major writing challenge of the play? What kept you up at night?

Vincent Delaney: The constant knowledge that I was doing this because of my own fear of parenthood. Most of the draft happened in the weeks before we actually had the twins, which is a very twisted scenario for writing a play like this one.

What does director John Wooten bring to the table?

Vincent Delaney: John has a restless curiosity in rehearsal, which pulls everyone in and creates trust. You can tell he thinks constantly about the characters. He has an easy going way with actors and playwrights that’s perfect for this play, since we all have to go to some pretty dark places. He challenged me to create more for Jane’s arc, which led us to some fascinating scenes that play with time. I wouldn’t have had those scenes without him. It’s been a great balance — he can see places to explore, points me in a certain direction, but doesn’t try to do it himself.

Where did Las Cruces have earlier development?

Vincent Delaney: It had readings at Seattle Rep, the Playwrights Center, and a very productive workshop at The Actors Company Theatre (TACT) in New York, all within the past several years. Last year the first half hour was staged as part of a one-act festival in Seattle (SOAPfest), which got me excited about getting this one on its feet.

Vincent Delaney: I’ve got a play opening at Seattle Children’s Theatre called Fire Station 7, and a piece called The Ansel Intimacy getting workshopped at A Contemporary Theatre in Seattle this fall. It was in the Premiere Stages Festival two years ago. I’m also developing two pilots with a couple producers in L.A. Yes, the TV bug bit me as well.