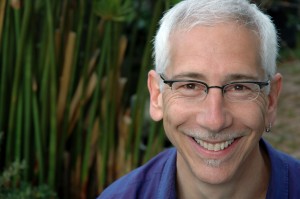 Family Shots, Michael Slade’s intergenerational comedy contrasting traditional marriage and same-sex marriage within a family, will get its world premiere in Dayton, OH, in early 2015 as part of The Human Race Theatre Company’s season at The Loft Theatre.

The New York playwright, librettist, novelist, screenwriter and television writer told me, “Our country, and I guess the world, is finally looking at the word ‘marriage’ in a new way. But in this age of marriage equality there are still huge questions for everyone — straight and gay. What is marriage? What does it mean to be married? What does it mean to be not only personally, but publicly committed to another person? And that’s what I’m exploring in Family Shots through the story of a long-married heterosexual couple and their more recently married son and his husband.” 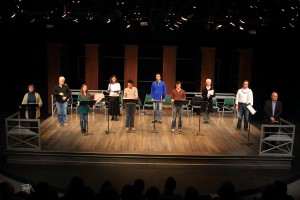 Human Race staged the world premiere of Slade’s play Under a Red Moon in fall 2012, in a co-production with The Carnegie in Covington, KY. In March 2013, The Human Race presented a workshop reading of his drama Gingerbread Children, about child abuse and human trafficking. (I was lucky enough to have my musical Voice of the City, written with composer Elaine Chelton, workshopped at HRTC in 2006.)

Here’s how The Human Race bills Family Shots: “Charming family patriarch Sam Baker lies in a hospital bed, recovering from an apparent heart attack, but his wife, Marsha, won’t stop making the crisis all about her — much to the dismay of their son, Aaron. The young photographer wonders why his parents even stay together while dealing with his own issues as a newlywed. Intimate, yet universal, this new work by Michael Slade is a wildly funny and touching comedy about marriage — its joys, challenges and responsibilities — and what’s worth fighting for.”

“I had some long talks with my partner about the characters I was envisioning,” Slade explains of the genesis of the play. “And of course, the issue of marriage was certainly in the air. But the play’s not really based on a personal experience…though there’s a piece of me in every character I write. 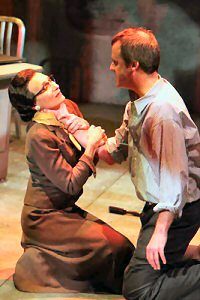 Dee Pelletier and Bradford Cover in the HRTC world premiere of “Under a Red Moon.” (Photo by Scott J. Kimmins)

Slade penned the book for the musical And the Curtain Rises (music by Joseph Thalken, lyrics by Mark Campbell) inspired by the creation of the seminal 1865 muscial The Black Crook. It premiered at the Signature Theatre in Arlington, VA, in March 2011. His play Change, which was commissioned by The Human Race Theatre for its Theatre in Context program, premiered there in fall 2011. His play And a Child Shall Lead, telling the story of a group of child prisoners in Terezin Concentration Camp is regularly produced by regional theatres, schools and community groups in the U.S. and abroad. He has also written for a handful of TV soap operas, including “Days of Our Lives” and “Passions.” Learn more about his work at his website.

“My work is very eclectic, which at times has driven my agents a bit nuts as it can make it hard to ‘sell’ me,” Slade says of his body of work. “But I want to tell the stories that interest me, and that accounts for the variety of forms and genres. That said, my writing is always very personal; whether it’s a play dealing with a serial killer (which actually explores ‘What is faith?’) or a romantic comedy, a children’s musical or even a television soap opera. Underneath whatever the plot is or the characters are it’s always, ultimately, me grappling with some feeling or issue or question.”

Slade fielded a handful of my questions about of the six-character Family Shots, his history and his approach to playwriting.

How were you surprised by the process of writing Family Shots?

Michael Slade: The most interesting surprise as I wrote and developed Family Shots was the way my allegiance to characters kept shifting/changing. Sometimes I found myself completely agreeing with one, and subsequently completely disagreeing with them and agreeing with someone else. By embracing that as a writer, I hope I’ve created the same sort of emotional roller-coaster experience for the audience.

Has the play been developed/read somewhere?

When you write, do you plan a meticulous road map for action and character, or do you allow yourself detours?

Michael Slade: I always come up with a road map, but I’m also a big fan of detours — of giving myself permission to follow them, and of giving myself permission to turn around again. And though sometimes a detour turns out to be a dead end, other times they are where I find the most wonderful surprises. And, as a rule, the scarier the detour the more I get worried that maybe I shouldn’t go down that road — that it could be dangerous — the more exciting it usually turns out to be.

When you’re at the very start of an idea for a play, what emerges first? Character? An “event”? A conflict? What did you “see” first in Family Shots?

Michael Slade: It really depends on the piece. Character is always very important to me, and often the idea for a play or novel or film or television script will start with a character or characters I become fascinated by, whether my own invention or historical. 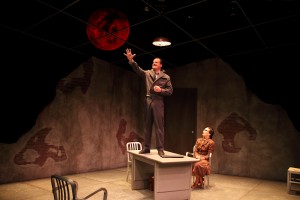 Bradford Cover and Dee Pelletier in the HRTC world premiere of Slade’s “Under a Red Moon.” (Photo by Scott J. Kimmins)

The idea for Under a Red Moon began with learning about an incident involving the serial killer John George Haigh, but it was ultimately the character of Haigh, whom I found so fascinating, that compelled me to write the play. The same is true for And a Child Shall Lead, which tells the story of a remarkable group of children who were prisoners in a concentration camp during the Holocaust. The event inspired me, but the characters compelled me to continue. In the case of Family Shots, the conflict was the starting point, but again, it was becoming fascinated by and falling in love with the characters I was creating that saw me through the process.

You have a production history with Human Race Theatre Company. How did the new play come into their hands?

Michael Slade: I think of the Human Race Theatre as my home, an amazing luxury for any playwright. My long-standing relationship with them and producing artistic director Kevin Moore began when they did a workshop of Act One of my musical And the Curtain Rises. I was bowled over by the caliber of production at the theatre and by the sophistication of the Dayton audiences. Apparently, Kevin was equally taken with me and asked to read some of my other work. That led to them producing the premiere of Under a Red Moon, a workshop of Gingerbread Children and commissioning and producing Change. When I told Kevin I had a new play — Family Shots — he asked to read it and within days called to ask if I would consider letting them premiere it.

Where were you born and raised, and what was your exposure to theatre as a kid?

Michael Slade: I was born in New York City, raised on Long Island. From earliest childhood I was regularly taken to Broadway and Off-Broadway plays and musicals — also to museums, movies, ballet, concerts and opera. I also grew up going to professional basketball, baseball and football games, all of which informed who I grew up to be.

What else are you working on, or what’s coming up for you?

Michael Slade: I’ve just finished a screenplay with a collaborator, Brian Kellow, entitled “The Critic,” that is based on Brian’s highly acclaimed biography of Pauline Kael (“Pauline Kael: A Life in the Dark”) that came out in the fall of 2011. I’m also in the midst of a new play and have just begun work on a musical that I’m writing with Melissa Manchester and Sharon Vaughn.

The Human Race Theatre Company was founded in 1986 and moved into the Metropolitan Arts Center in 1991, taking up residence at the 212-seat Loft Theatre. In addition to the Eichelberger Loft Season, The Human Race produces for the Victoria Theatre’s Broadway Series, the Musical Theatre Workshop series, and special event programming.