A Plane Crash Sparks “The Unlikely Ascent of Sybil Stevens,” a New Play by Kari Bentley-Quinn 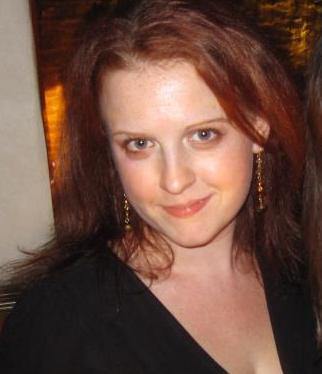 A flight attendant who is the sole survivor of a plane crash finds herself in the spotlight, and struggling with the glare, in The Unlikely Ascent of Sybil Stevens, a new play by Kari Bentley-Quinn, landing Feb. 6-23 at The Secret Theatre in Long Island City, Queens.

“I really wanted to explore our social media and celebrity culture, and the way we build people up and tear them down,” Bentley-Quinn explains. “I wanted to couple that with survivor’s guilt, and the question of who lives and who dies and why. Sybil survives, but is very uncomfortable when people refer to her survival as a ‘miracle.’ I have always had an issue with this idea that people who survive things are miracles, when other people lost their lives. Are those people who perished somehow less deserving?”

Sybil’s post-trauma life is complicated when she agrees to appear on a talk show at the urging of a publicity-hungry nephew, Derek. The playwright calls the Sybil-Derek relationship the emotional center of the play. The arrival of Joe, the man who saved her life, adds heat to her experience. 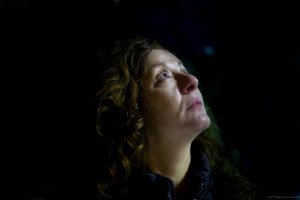 “It’s about a survivor of a plane crash, but the darkness implied by that definitely has moments of levity,” the playwright says. “Some scenes have really funny moments. That seems to be what I do — I write these dark plays that have moments of humor and lightness to break up some of the heavier stuff. I think there is a lot of humor to be found in even the most dire situations.” 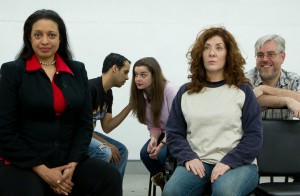 Richard Mazda, artistic director of The Secret Theatre, is the production’s executive producer. The play is part of The New Voices Project, created by the Secret Theatre “to encourage and support new work, and offers playwrights a unique opportunity to develop their plays through fully staged workshops with an eye towards full production.”

The Unlikely Ascent of Sybil Stevens plays Thursdays, Fridays and Saturdays at 8 PM and Sundays at 3 PM. Tickets are $18 and are available online, by contacting the box office at (718) 392-0722, and at the door. The Secret Theatre is at 4402 23rd St. in Long Island City, NY, a stone’s throw from Manhattan’s Midtown East, with easiest access from the No. 7 train; it’s located under the elevated line between the Queensborough Plaza and Court Square stops.

In the week leading up to the play’s Feb. 6 takeoff, the playwright shared some thoughts about her new play, her background and her process.

Take me back to the roots of The Unlikely Ascent of Sybil Stevens. What inspired it? 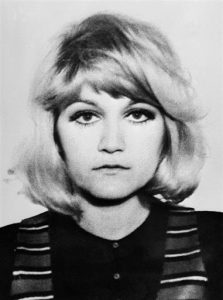 Kari Bentley-Quinn: I was in an airport waiting to go to Chicago, and read an article about a flight attendant named Vesna Vulovic, who in the ‘70s was the sole survivor after her plane was bombed. She fell from 33,000 feet — a Guiness World Record for longest free fall survived without a parachute. She became very famous in Serbia and became a political activist. I wondered what would happen to Vesna if she had survived this crash now, with our crazy, out-of-control celebrity culture and the ubiquity of social media. That’s when I came up with the idea.

Was research about air disasters or survivor guilt part of your process?

Kari Bentley-Quinn: Oh, yes. I studied plane crashes intensely, almost obsessively. It was pretty harrowing. I find plane crashes fascinating and also completely terrifying. When I was in high school, a teacher in my school died on Swiss Air Flight 11 with her husband. No one survived that crash. They found some of her textbooks she was using for class floating in the ocean. I still remember them talking about it. Because of that, and general anxiety issues, I used to be one of those people who had to drug themselves to even get on a plane. After poring through tons and tons of lit and listening to black box recordings, I have scared myself straight.

You would think reading about Lockerbie and JAL 123 (don’t Google that if you ever want to sleep again), and seeing images of charred bodies and wreckage would have made me more anxious, but the truth of the matter is that major aviation disasters are incredibly rare. That was never much comfort to me, but I’ve learned something key about big planes: they want to stay in the air. It takes some pretty major stuff to take down a jumbo jet. I also learned that most people survive plane crashes, statistically. Crashes where all people die get so much publicity partially because they’re so infrequent. 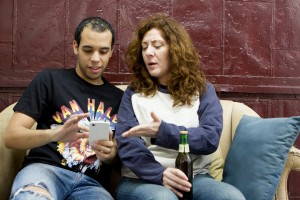 Traditionally, flight attendants have been dismissed in our (pop) culture as waitresses or sex objects, though that has changed in recent decades. They are there primarily for the safety of the passengers, not to serve as waitstaff. How deeply did you dip into the history or experiences of flight attendants to create the play?

Kari Bentley-Quinn: I read a lot of first-person accounts from flight attendants who had survived aviation disasters, and there are some great anonymous blogs out there. There’s a scene where Sybil describes the revolting items that passengers stuff into the pocket in front of their seats, and that is 100 percent true. Some of the stories are hilarious, disgusting, moving and outrageous. I also worked in the service industry as a waiter for many years, and I imagine it’s not unlike that, except you’re trapped in a metal tube in the sky propelled through the air by fire. I don’t think that the actual occupation is a main focus in the play, though. It was Sybil’s job, one that she loved, and one she is no longer able to do. This greatly impacts her identity.

As for the sex object thing — I definitely wanted to turn that notion on its head. Sybil is a rough-around-the-edges, no-nonsense, 40-something, working-class gal. She’s not a perky blonde in a pencil skirt!

I gather that Sybil embraces — or exploits — her fame as a survivor?

Kari Bentley-Quinn: Not to give too much away, but she neither embraces nor exploits her fame. Her fame and the attention she gets is unwelcome, and any exploitation is done to her rather than by her. Sybil, more than anything, wants her life to go back to normal. The play is a lot about what she does when she realizes that going back to normal is absolutely impossible. 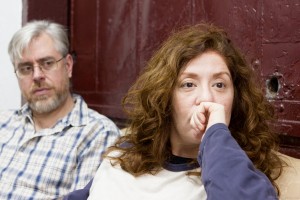 When you’re first conjuring a play, what’s usually your starting point? A situation? A character? Conflict? What character did you see very clearly at the start of the writing of your new play?

Kari Bentley-Quinn: I usually get images first. With Sybil, as soon as I read the article about Vesna Vulovic, I got the very first image, which was imagining falling down through the air, looking up and seeing nothing but sky. That image is in a scene in the play. Sybil was clear to me from the get-go. She’s exactly the type of female character I’ve been hoping to write. I’ve loved getting to know her.

Do you meticulously map out your plays, or does your process allow you to discover avenues or even whole new characters along the way? Can you explain with an example from this play?

Kari Bentley-Quinn: There is nothing meticulous about my process. It’s a mess most of the time! I never know what is going to happen. This play took a lot of detours. The ending of Act One as it exists now was one of the very last things I wrote. It was supposed to be different. The thing that happens in the end of Act One was originally going to happen totally offstage. I’m not sure why now, as that makes no kind of sense, but that definitely changed. 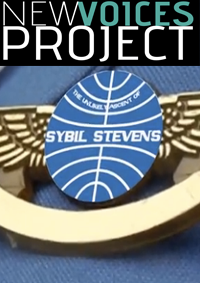 Poster art for the new play.

How did the presentation at the Secret Theatre come about?

Kari Bentley-Quinn: Through Christopher Diercksen, my director. He showed the script to them and they offered me a fully staged workshop through the New Voices Project. We did a three-performance workshop at the Secret last March (in their smaller space), and based on that feedback, I went ahead and did more rewrites. Richard Mazda, the artistic director of the Secret, sat Chris and I down and offered us a full production. Needless to say, we were absolutely thrilled. It’s been such a luxury to take a play from reading to workshop to full production.

I’m curious about where you grew up, and your exposure to theatre as a kid, if any. Is your family theatre-minded?

Kari Bentley-Quinn: I grew up in Stratford, CT — about 90 minutes from here on Metro North. My family wasn’t theatre-minded at all, really. I didn’t have a lot of exposure to theatre as a kid, not until we started seeing Broadway shows on class trips. I did a couple of plays in elementary school, which was fun, but the obsession didn’t start until later.

I would say my house was much more into music. My dad played the guitar, and there was always music on. My brother is a musician, too. I do not have one lick of musical talent. I think I’m just a frustrated musician!

Any specific memories of an important theatre experience, something that inspired you to seek a stage career?

Kari Bentley-Quinn: I saw Les Misérables on Broadway — my first Broadway show — when I was 12. That was pretty much it for me. I was hooked. Done for. I’ve been doing theatre ever since. 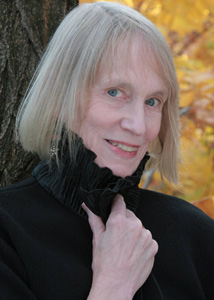 You’re in the Hunter College MFA playwriting program. Can you explain the experience? What is your work schedule like? Is it a pure playwriting-based program, or are you taking traditional classes as well?

Kari Bentley-Quinn: It’s a two-year program. I started in the fall of 2013, so I’m in my second semester now. My schedule is insane. I’m in school two nights a week (last semester it was three!) and I have a 9-to-5 [job]. Oh, and I’m opening a show in the middle of it all! I guess I’ll sleep when I’m dead. It has been a huge adjustment and an absolutely insane amount of work. The first year is a bit more academic-heavy, as CUNY has pretty rigorous academic standards, so on top of playwriting I’m taking Theatre History II and Play Analysis. Last semester I took the first half of Theatre History and a class called British Theatre After World War II, which was great. I’m kind of a nerd, so I don’t mind the academics so much. I had to remember how to write a paper! Next year will be more focused on the thesis production and writing classes, including an adaptation class with Tina Howe.

The best thing about the program so far — besides Tina, but I’ll get to her in a second — has to be my classmates. Stacy Osei-Kuffour, Dan McCoy and David Hilder are three of the most talented and generous people I’ve ever met, and we all get along like we’ve known each other our whole lives. We are all on each other’s sides and really support one another. I just started my thesis play, and I’m in class with Tina Howe writing it this semester. She is just fabulous, and she’s been so wonderful. She’s an artist in every possible sense of the word, and I have a feeling she is going to push me in all the best ways. She’s also just a lovely person and a joy to be around. I’m so excited for this semester.