Philly’s InterAct Has Two World Premieres in 2013-14, One About Cheesesteaks “Whiz” Attitude 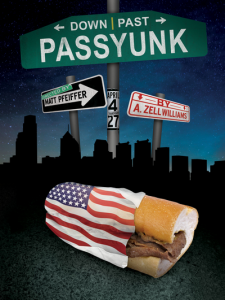 Production art for “Down Past Passyunk.”

InterAct Theatre Company, the Philadelphia troupe that produces “new and contemporary plays that explore the social, political, and cultural issues of our time,” will stage two world-premiere productions in a four-title 2013-14 season at The Adrienne, its 106-seat home.

Down Past Passyunk, by A. Zell Williams, will entice Philly residents who like their cheesesteaks — the local comfort food, often slathered with Cheez Whiz — served hot, fast and with attitude.

The world premiere running April 4-27, 2014, under the direction of Matt Pfeiffer, is billed this way: “Grillo’s Steaks — one of South Philly’s famous landmarks — is at a crossroads.  Longtime owner Nicky Grillo is embroiled in a public relations nightmare ever since he asked one of his customers to ‘speak English’ when ordering a cheesesteak. As he watches his community rapidly diversify, Nicky pits himself against his spirited daughter, his oldest friend and a popular new Mexican steak shop across the street.  In the City of Brotherly Love, how far will one man go to keep his neighborhood All-American?”

InterAct artistic director Seth Rozin will direct Peter Gil-Sheridan’s Ritu Comes Home, an InterAct world-premiere commission to run May 30-June 22, 2014. Here’s how the Equity company characterizes the work: “Would you give money to feed a child in a third world country? Brendan and Jason, an affluent couple from Bryn Mawr, PA, proudly pay 80 cents a day to support their ‘adopted’ Bangladeshi daughter while spending their days drinking, eating, drinking, shopping, dissing — and drinking. Until one day, when the child-turned-teenager magically appears in their living room, turning everyone’s lives upside down. What follows is an irreverent and imaginative romp exploring the meaning of home and family in an increasingly globalized world.”

The 26th InterAct season also includes We are Proud to Present a Presentation about the Herero of Namibia, formerly known as South West Africa, from the German Sudwestafrika, Between the Years 1884-1915 by Jackie Sibblies Drury, directed by Pirronne Yousefzadeh, Oct. 18-Nov. 10, 2013. The play was seen at Off-Broadway’s Soho Rep in late 2012.

In it, “an ensemble of actors comes together to create a play about an obscure 20th century genocide. What begins as an amicable workshop, unravels into a storm of competing egos and conflicting agendas. From the mire of creativity, hidden hatred and dormant violence bubble to the surface forcing these ‘post-race’ Millennials to confront their true nature. At once chilling and fiercely funny, We Are Proud to Present… brings the past and present together.”

Gidion’s Knot by Johnna Adams, directed by Rozin, follows Jan. 17-Feb. 9, 2014. In it, “a grieving mother arrives at her son’s school looking for answers following his sudden death. She is met by his bewildered and fragile teacher. As their tense, emotionally-charged parent/teacher conference unfolds, reasons for the boy’s death become more complex and alarming. Adams’ gripping drama draws us into an intensely personal battle to understand the vivid imagination and tortured soul of one extraordinary ten year-old boy.”

Founded in 1988, InterAct’s aim “is to educate, as well as entertain its audiences, by producing world-class, thought-provoking productions, and by using theatre as a tool to foster positive social change in the school, the workplace and the community.” 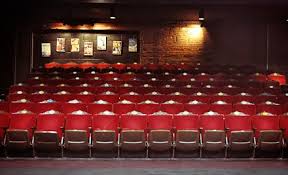 The Adrienne is at 2030 Sansom Street in Philadelphia. For more information, visit InterActTheatre.org.