New Sun in the Sky: M-G-M’s “The Band Wagon” Takes a Fresh Ride in Encores! Concert 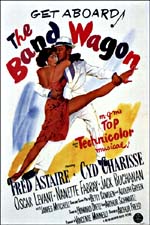 A live musical theatre adaptation of the M-G-M movie musical “The Band Wagon” is such a natural idea for the New York stage that it’s hard to believe that it didn’t happen sooner than the Douglas Carter Beane-penned version that will play 12 performances Nov. 6-16 as an Encores! Special Event — in concert — at City Center.

A show-tune-packed backstage tale of bigger-than-life theatre people going through the trauma of creating a new musical on the road? With source material by madcap musical comedy writers Betty Comden and Adolph Green? A score that includes such Golden Age hits as “Dancing in the Dark,” “By Myself” and “A Shine On Your Shoes”?

In fact, the musical did happen sooner. Back in 2008, The Old Globe in San Diego produced the Beane-scripted Dancing in the Dark, borrowing (as the movie did) songs from the catalog of lyricist Howard Dietz and composer Arthur Schwartz. 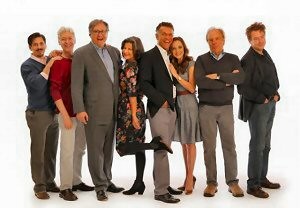 Douglas Carter Beane (third from left) with the Encores! cast of “The Band Wagon.” (Photo by Joan Marcus)

Beane took plot elements from various drafts of the screenplay of the 1953 picture that starred Fred Astaire as a faded film hoofer making a stage comeback. He particularly sought to expand the “second act” of the story, which was light on character and plot and heavy on song montage. Beane even consulted with Betty Comden on the project before her 2006 death. She had sent him the original draft of the screenplay, some scenes of which were never filmed.

Dancing in the Dark, directed by Gary Griffin (The Color Purple) and starring Scott Bakula (“Quantum Leap”) in the Astaire role, did not try to look and sound exactly like the beloved movie, which is generally considered one of the studio’s two great color musicals from the ’50s (along with “Singin’ in the Rain”). Beane’s show offered new flashbacks to flesh out the history of his showfolk.

Neither the California version nor the new Band Wagon settles for turning the last half of the show into a mere collection revue songs. That is, don’t expect a recreation of the movie on stage at City Center. 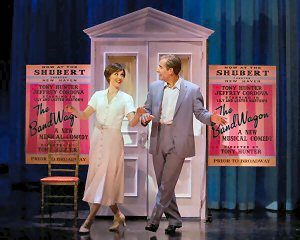 Mara Davi and Scott Bakula in the earlier incarnation, dubbed “Dancing in the Dark,” at The Old Globe. (Photo by Craig Schwartz)

Dancing in the Dark pleased some theatergoers, took a drubbing in the Los Angeles Times (hey, it was still an out-of-town test) and quietly went dormant. Fran and Barry Weissler (Chicago) were attached as commercial producers (reportedly, the adaptation was Barry’s idea in the first place) and they remain so. (No one is saying it out loud, but this Encores! run is clearly a tryout for a future Broadway life for the property.)

“After the Globe production, nothing happened,” Beane told me. “So I went on with my life. I said: ‘That’ll happen when it’s supposed to happen.’ After five years, you think it’s dead so you ransack the play for any good lines and put them in Fledermaus and do what you can to get on with your life.”

In recent years there were conversations between Barry Weissler, Tony Award-winning director-choreographer (and Encores! associate artist) Kathleen Marshall (Nice Work If You Can Get It, Wonderful Town) and Encores! artistic director Jack Viertel about exploring the property further as a script-in-hand Encores! Special Event, separate from the series’ usual focus on vintage stage musicals. 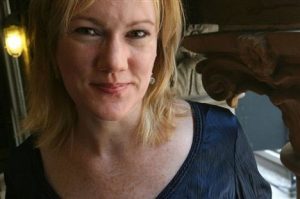 “We had a ‘living room reading’ and we had a discussion,” Beane explained of the process. He said that one of Marshall’s notes concerned the momentum of songs: “Kathleen said that [the characters] ‘seemed to be interrupting a lot — they start singing a song and then they interrupt for dialogue. I like when people start singing and just sing.'”

So Beane looked for ways to move dialogue out of the fabric of songs and into the scene work.

Six years removed from the creation of Dancing in the Dark, Beane was apparently not sentimental or precious about his earlier take. He has now cut the flashback sequences that told back story of showbiz pals Tony Hunter (originally played by Fred Astaire) and songwriters Lily and Lester Martin (originally, Nanette Fabray and Oscar Levant).

“It suddenly seemed a lot faster, quicker, it helped it move along at a nice pace,” Beane told me on Nov. 3. “And that’s the play we sat down and all read at the table two lengthy weeks ago.” The Encores! rehearsal process is notoriously short. In just two weeks, dance, song, orchestra, script and actors merge, with a suggestion of sets and costumes. It’s summer stock with scripts in hand, with A-List stars. (For the record, the City Center playbill indicates that the production is technically billed as a “concert performance” and that “the actors may be performing with their scripts in hand.” In fact, you probably won’t see many scripts.)

Beane said that under Marshall The Band Wagon now features songs that were not heard in Dancing in the Dark, including two numbers from Dietz & Schwartz’s 1963 flop book musical Jennie (“When You’re Far Away From New York Town” and “I Still Look at You That Way”). Also present (as it was in California) is a tune from D&S’s best book score (albeit still a flop) The Gay Life (“Something You Never Had Before”). (Side note: stop what you are doing right now and get the original cast album of The Gay Life; it’s a great score worthy of development in revival, or at least in concert revival by Encores!) Dietz & Schwartz’s “A Rainy Day” (from their 1932 musical revue Flying Colors) is also newly added.

The rest of the score borrows from the film songs (including numbers muted or cut from the movie), which were themselves all drawn from Dietz and Schwartz’s Broadway revues, including — are you following this? — The Band Wagon from 1931. 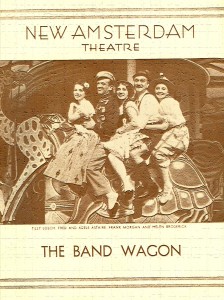 The Playbill cover from the 1931 Broadway revue “The Band Wagon”

The Band Wagon — a vehicle for Fred Astaire and sister Adele Astaire (and Frank Morgan, Tilly Losch and Helen Broderick) — was said to be the height of theatrical sophistication in its design, staging and writing. No lavish girl choruses, just indelible stars and smart material. The now-forgotten sketches were by Dietz and Broadway’s top comic playwright George S. Kaufman. The score included “I Love Louisa,” “New Sun in the Sky,” “Dancing in the Dark” and “Sweet Music (To Worry the Wolf Away),” all presented atop a breathtaking turntable that revolved on stage at the New Amsterdam Theatre.

Fans of the source film can rest assured that this retooled Band Wagon also features the showbiz anthem “That’s Entertainment,” the one number that Dietz and Schwartz wrote for the 1953 movie. This is the song that rhymes “prince meet” with “mincemeat.” Beane said he was given access to the entire D&S songbook, and that the stage score will feature some lesser known lyrics to well known standards. (Dietz died in 1983, Schwartz passed in 1984. The latter’s son, Jonathan Schwartz, as you probably know, hosts WNYC’s “The Jonathan Schwartz Show” and is heard on the free streaming service The Jonathan Channel, which carries high the banner of the Great American Songbook.)

Beane, a multiple Tony Award nominee whose plays and musicals include The Little Dog Laughed, Xanadu, Lysistrata Jones, The Nance, Sister Act, As Bees in Honey Drown and the recently retooled Cinderella, said that the new Band Wagon follows the basic structure of the film — even if it’s not a scene-by-scene, song-by-song recreation — up through intermission. “A Shine On Your Shoes,” for example, is a big ensemble number at the end of Act Two rather than appearing near the top of the story. “By Myself,” too, is in a new spot and context. 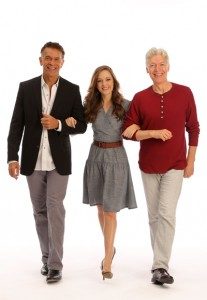 The movie and stage plot goes like this: Tony Hunter (now played by Tony Award winner Brian Stokes Mitchell) agreeing to star opposite prima ballerina Gabrielle Gerard (originally Cyd Charisse, now Laura Osnes, as a modern dancer, not classical) in a new musical comedy by Lily and Lester (who Comden and Green modeled after…Comden and Green, now played by Tracey Ullman and Michael McKean). But the literary-minded British director Jeffrey Cordova (originally played by Jack Buchanan, himself a veteran of Dietz and Schwartz’s 1937 musical Between the Devil, which gave us “Triplets” and “By Myself”) refashions their musical comedy into a pretentious allegory along the lines of Faust and sinks the property in its out-of-town tryout. Priscilla Queen of the Desert star Tony Sheldon plays Jeffrey, with Don Stephenson as his harried right-hand man Hal and A Chorus Line‘s Michael Berresse (classy and sleek in Paper Mill Playhouse’s recent Can-Can) as Gaby’s modern-dance choreographer Paul Byrd.

In the film, Jeffrey poisons the show’s commercial prospects by making it lugubrious “art.” It’s dark, abstract, bombastic. When it bombs, the collaborators convert the show into a buoyant plotless revue. (Check out Nanette Fabray singing “Louisiana Hayride” in the movie‘s montage sequence.)

“That’s in the movie, but not in this,” Beane said. “In the film, it’s a musical comedy that they try to make ‘important musical theatre’ and then they pitch it all and make it a musical revue.”

Beane wasn’t interested in the show-within-the-show becoming a revue. “I think the 17 people who would appreciate a musical revue will be gone very soon,” he said with a laugh, adding that he doesn’t like “just throwing up a number” — he wanted to see the characters working and singing in the context of creating a musical comedy.

Beane observed, “Television variety shows in this period, the 50s, sort of took the romance out of idea of ‘the difficulty of putting on a revue.’ It seemed like you could put anything up on television. On television, there was a Broadway revue every week. The thought and care that went into them are minimal.” 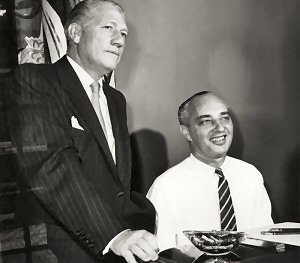 For the record, as of Nov. 5, the production’s songlist also included “A Brand New Suit,” “You and the Night and the Music,” “Something to Remember You By,” as well as songs mentioned above (“I Guess I’ll Have to Change My Plan,” “Triplets,” “Louisiana Hayride,” “Sweet Music,” “Dancing in the Dark” and more).

Here’s information about tickets for the 12-performance run.