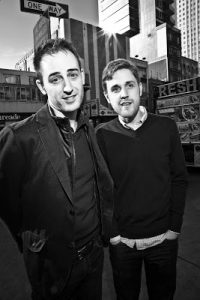 Their new project — working title: The More Things Change — is a backstage story about musicals and their practitioners that is both valentine and spoof, the collaborators say.

“It’s kind of like if Noises Off were a musical — or if ’30 Rock’ took place backstage at a Broadway musical,” lyricist-librettist Blair tells me. “In a nutshell, an egotistical One-Hit-Wonder from the ’60s has written a flashy new Broadway show detailing his inspiration to write the big, hit pop song, ‘Looking Better (Cha Cha Cha).’ It’s opening night, minutes before the curtain goes up, when the ‘inspiration’ — his former flame — bursts through the stage door with evidence that she, in fact, wrote the song. She blackmails him into letting her appear in the show. She improvises her way through the onstage story with the intention of exposing him as a fraud by the time they get to the climactic songwriting scene. What follows is pure chaos.”

Blair and composer-librettist Kinosian know from funny. Their zingy, two-actor, 90-minute Murder For Two — the score of which is preserved on an Off-Broadway cast album featuring frisky Brett Ryback and tireless Jeff Blumenkrantz — is packed with invention, wit, gags, absurdity, profanity, insanity and dizzying triple rhymes as it tracks the investigation of the murder of a famous novelist. 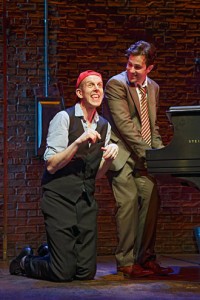 Jeff Blumenkrantz and Brett Ryback in the New York staging of “Murder For Two.” (Photo by Joan Marcus)

The show’s mind-boggling math of assigning one actor the roles of nearly a dozen homocide suspects, opposite the other actor playing an eager wannabe detective, is enough to keep your blood pounding. But they both play the piano, too. And they sing. And they dance. And act. Seeing Jeff Blumenkrantz playing a handful of street-tough Dead-End kids from a boy choir in a song called “A Lot Woise” is one of the high points of my lifelong theatregoing career.

(When the show played an extended Jeff Award-winning run at Chicago Shakespeare Theater prior to New York, Kinosian himself played the suspects, and he even stepped into the Off-Broadway run for several weeks. Scott Schwartz directed the Off-Broadway incarnation, which was tested at Second Stage Uptown in summer 2013 and then moved to New World Stages in the fall. Jayson Raitt and Barbara Whitman were the project’s lead producers.)

Add a hint of audience participation, a huge dollop of pop love-song sincerity (as when an amateur girl criminologist reaches out to help the detective, singing “He Needs a Partner”), and Murder For Two has the muscle of a cross-generational crowd pleaser.

Anyone with an appreciation of musical comedy craft should embrace Murder For Two. If they had written the show in the 1960s, these songwriters (who share book credit) certainly would have been offered a future Broadway score to write within a year of the musical’s bow. (The economy and the producing climate is different these days; flames are snuffed more often than fanned. Does any producer just walk up to an emerging songwriter and invite them to write a Broadway show, like one did to Jerry Herman?) At any rate, the show is an accomplished calling card that makes you want more from the pair, and will remind you of such confident shows as Little Shop of Horrors, The Producers and Avenue Q. Check out samples from the score at the Ghostlight Records site.

You might soon see Murder For Two in a city near you. It’s being published by Samuel French. The New York production will be launched on a tour, which will include a stop at The Old Globe in San Diego, where Kinosian will reprise his performance as The Suspects. Expect bookings of the Schwartz staging by Philadelphia Theatre Company, Geffen Playhouse, Laguna Playhouse, Capital Rep, Arizona Theatre Company and Lyric Theatre of Oklahoma. The musical’s official website will have updates about the property’s future life. 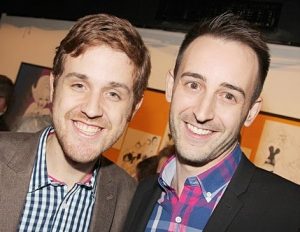 The More Things Change, meanwhile, has already been heard in a developmental reading, with another expected in the coming months. The writers are not married to the title. “That’s one of the first things that’s about to change,” Blair confesses. “We’ve gotten feedback — and we totally agree — that it doesn’t evoke the right tone for a farcical musical comedy or say enough about the concept of the show. So at the end of all this, if you have any title ideas, feel free to let us know!”

They call it “an original traditional book show” that exploits “theatre cliches and traditions, exaggerating the various egos and ambitions that collide backstage,” Blair says. “It’s also a love letter to the medium we enjoy so much. People seemed to really respond to the theatricality of Murder For Two — the fact that it was tailor-made for the theatre, and would make a pretty stupid book or movie. Similarly, this show is all about the excitement and chaos of live theatre.”

Where did the idea for The More Things Change come from?

“It’s the conglomeration of hundreds or brainstorming sessions,” Blair says. “Some elements of the story died along the way, others survived, and here we are. I do remember that it took a while to get excited about a next project as much as we’re excited about [Murder for Two].” 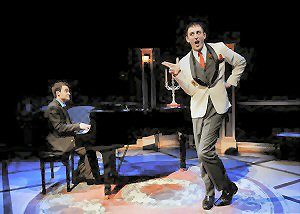 Alan Schmuckler (at piano) and Joe Kinosian played the roles in “Murder For Two” at Chicago Shakespeare Theater in 2011.

He continues, “We started working on a show that was nothing like Murder For Two and people said, ‘What is this? It’s nothing like Murder For Two. We don’t know what you guys do.’ Then we wrote a show that was exactly like Murder For Two and people said, ‘You’ve already done this! Can’t you do anything else?’ Then we started writing this show, and it feels like the perfect blend of both worlds. The characters, while outrageous, are a little more real. In M42, part of the fun was playing around with the cliches and tropes of classic murder mysteries — even satirizing the fact that some of them are two-dimensional, a la the constantly self-incriminating femme fatale. We are playing around with cliches a bit [in the new show] — egotistical director, ambitious young performers, etc. — but the relationships are a little more grounded in reality.”

The More Things Change “is uniquely us…the sense of humor and farcical nature of the show is very akin to Murder For Two. But it’s also a little more ambitious in scope. Right now it has a cast of 10 and an orchestra of… however many we can get. We didn’t approach the project with the idea of no props, costumes, orchestra, or chorus — a la M42.”

“We get together, comb through the script line by line, try to make each other laugh, and see what sticks,” Blair explains. “Mostly the book comes first. Mostly the music comes after that, with lyrics being written last. Mostly. All I know is we have a blast every time we sit down to put words into the mouths of these characters, and isn’t that what it’s all about?”

What else is new for the duo? Blair says, “We are definitely eyeing a few other projects at the same time. There always seem to be two or three things that we’re waiting to hear about rights-wise; that can take forever, which is why we like moving forward with original stuff. We’ve also been talking to a fantastic playwright about collaborating on something…”