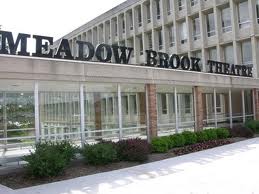 Meadow Brook Theatre’s entrance on the campus of Oakland University in suburban Detroit.

The first production in the 2013-14 season of Michigan’s Meadow Brook Theatre ends Oct. 27 with the final performance of Ken Ludwig’s The Game’s Afoot or Holmes for the Holidays, part of an eclectic slate that reaches out to a multigenerational audience. The seven-show season features one world-premiere comedy and five Michigan premieres.

We’re just under the wire for a progress report about the current slate of shows planned for Michigan’s largest not-for-profit resident theatre — the LORT D troupe has about 4,000 subscribers and a $1.8 million annual budget. Here’s what you need to know.

The lineup launched Oct. 2 with the Sherlock Holmes-inspired comedy-mystery by Ludwig, author of the past Meadow Brook hit Lend Me a Tenor. The play’s main character is early 20th-century American actor William Gillette (played by Ron Williams, of last season’s White’s Lies), who made a fortune playing the famed detective on the stage. Gillette now has to solve a mystery set in his own lavish Connecticut home, Gillette Castle. 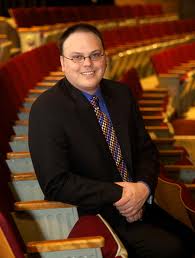 “[It’s got] the right amount of mystery coupled with the perfect amount of farce; I laughed myself silly reading it,” says Meadow Brook artistic director Travis W. Walter, who will direct every title except A Christmas Carol this season. (Running a tight ship in hard economic times, MBT is not employing other directors this season, save for resident associate director Terry W. Carpenter, who will stage the Dickens classic.)

MBT has both variety and ambition this year. Something for everyone, you might say. Well, almost everyone; the list of titles and writers is not exactly multicultural, though Walter says MBT seeks diversity in its casting.

The Rochester, MI, company on the campus of Oakland University, 30 miles north of downtown Detroit, reaches out to a traditional older crowd April 23-May 18, 2014, with Roger Bean’s musical comedy revue The Andrews Brothers, which serves up World War II-era songs in a USO setting where the iconic Andrews Sisters act is AWOL, prompting male stagehands to take their place. Four cast members of last season’s hit Life Could Be a Dream, also by Bean, reunite for the musical confection that features such period hits as “Boogie Woogie Bugle Boy” and “Don’t Sit Under the Apple Tree.” 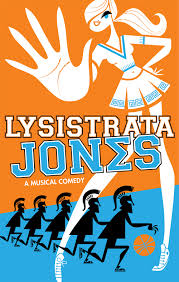 A younger audience will be enticed by the 2012 Tony Award-nominated, college-set pop musical Lysistrata Jones, by librettist Douglas Carter Beane and songwriter Lewis Flinn, inspired by Aristophanes’ Greek classic Lysistrata (circa 411 BC), about soldiers’ wives who withhold sex in order to end war. This time, the activists are re-imagined as cheerleaders who abstain in order inspire a college basketball team to victory. It dribbles into Meadow Brook Feb. 12-March 9, 2014.

Of the youth market, Walter says, “It’s always important to also branch out. Last year when we produced Next to Normal, the high school and college crowds came in droves. Subscribers were amazed to see so many young people in the theatre.”

In the ambition department, the 48th season includes two titles not widely known — Falling, Deanna Jent’s intense drama about a family touched by autism, and the world premiere of Harris Cashes Out!, a comedy by Canadian playwright Londos D’Arrigo, whose Spreading It Around was popular at MBT in 2011-12. 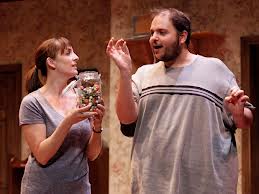 Julia Murney and Daniel Everidge in the Off-Broadway production of “Falling.”

Falling, seen Off-Broadway in 2012 following a St. Louis premiere, draws on the playwright’s own experience as a mom to tell the sometimes harrowing tale of three generations in a family challenged and inspired by a severely autistic child.

Walter and MBT managing director Cheryl L. Marshall saw the play in New York City last fall. “I don’t think I breathed [during] the entire show,” he says. “It was gripping, and Cheryl and I knew we had to produce it.”

Talkbacks with autism professionals and others will be presented during the March 19-April 13, 2014, run of Falling, and St. Louis playwright Jent is making herself available as a resource. (Jent’s Mustard Seed Theatre in St. Louis, where the play premiered, will do its own revival in spring 2014.)

Harris Cashes Out!, to feature Detroit-area acting fixture Paul Hopper Jan. 8-Feb. 2, 2014, concerns a down-and-out musical theatre writer whose past flop gets renewed interest. Toronto-based D’Arrigo, a former comedy writer for Phyllis Diller, Lily Tomlin and Joan Rivers, appeared at a talkback of MBT’s earlier hit Spreading It Around, a title that has popped up in many North American theatres.

Walter says, “Last year he emailed me that he had written another show. I jumped at the chance to read it and produce it.” D’Arrigo’s plays are “sweet, down-to-earth and heartfelt with a good message mixed in,” according to the artistic director. 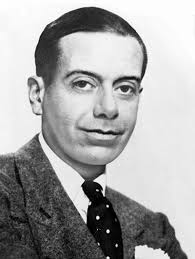 The heritage of musical theatre is addressed with a rare revival of the Cole Porter mistaken-identity musical comedy You Never Know, a large-cast Broadway musical from 1938 that, in the 1980s, was revamped by Paul Lazarus into a six-actor chamber musical. This is the Michigan premiere of the rewrite.

Set in Paris and light as champagne, it features five actors and additional songs from the catalog of composer-lyricist Porter (“Ridin’ High” and “Let’s Misbehave” among them). There’s a cast recording of the revised show on the market; the disc features Kristin Chenoweth, Donna McKechnie, David Garrison and Harry Groener. (Note to history buffs — the show played a tryout at Detroit’s Cass Theatre in April 1938.) MBT performances play May 28-June 22, 2014.

Local favorite Thomas D. Mahard will return to the role of Scrooge in the popular Charles Nolte adaptation of A Christmas Carol. The non-subscription show runs Nov. 15-Dec. 22.

Meadow Brook Theatre is at Wilson Hall on the campus of Oakland University in Rochester, MI. For subscription information, visit mbtheatre.com or call (248) 377-3300.