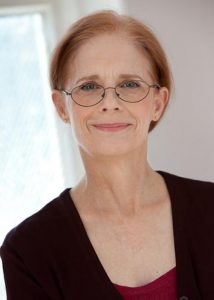 The fall season of Tales Well Told, the series of solo shows curated and performed by East Coast actress Michèle LaRue, is at its peak of color in the coming weeks. Bookings of her eclectic turns in which she conjures the fiction of yesteryear — circa 1850 to 1920 — are set for libraries in New Jersey, New York and Pennsylvania. And she’s prepping for 2015 dates at other American venues.

LaRue’s 30 or so intimate pieces drawn mostly from short stories come in a variety of styles and lengths, from book-in-hand concert readings to off-book full theatrical experiences. The authorship includes a range of famous and lesser-known writers, all of them representing what was on the American mind as the modern world was dawning. (Here’s the performance calendar for the rest of 2014.)

LaRue gives life to the words of Mark Twain (“Eve’s Diary”), O. Henry (“The Gift of the Magi”), Marie Jenney Howe (“Someone Must Wash the Dishes”), Charlotte Perkins Gilman (“The Yellow Wallpaper”), Elsie Singmaster (“Gettysburg”), Kate Chopin (“The Story of an Hour”), Mary E. Wilkins Freeman (“The Shadows On the Wall”), Elia W. Peattie (“The House That Was Not”), Bret Harte (“Dick Spindler’s Family Christmas”), Sarah Orne Jewett (“A Winter Courtship”) and Dorothy Canfield Fisher (“The Bedquilt”), among others. 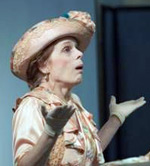 Her passion for the form has its roots in her association with The East Lynne Company of Cape May, NJ.

LaRue told me, “The genesis of my Tales is the fund-raisers that Warren Kliewer held for The East Lynne Company, which he founded in 1980 to revive the undeservedly underrated plays and literature of the late 1800s and early 1900s. For the ELC, we read old stories in the parlors and on the porches of Victorian Cape May, New Jersey. The company continues to put stories on those porches every summer.”

Kliewer, LaRue’s late husband, used to say that the stories of this period “were written for the ear, not the eye — they were meant to be read aloud,” LaRue explained. “In those days, not only children gathered around a grownup with a book. Adults of all ages — by candlelight, gaslight, and later electricity — sat back, the women often with sewing in hand, as a familiar voice and their own imaginations spirited them away to another time and place.”

She added, “Physically, I’m pushing the envelope of Oral Interpretation, with a nod to Story Theatre. The style and the ambition of it have evolved. I’ve performed the on-book Tales Well Told more than 120 times; several sponsors have asked me back, a couple of those six or seven times.”

For the record, Someone Must Wash the Dishes, The Yellow Wallpaper and Eve’s Diary “are full-out performances, off book, blocked, fully costumed.”

How does LaRue go about crafting the prose for the spoken theatrical format? 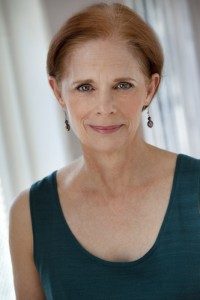 “There’s very little ‘adapting’ of Tales Well Told,” she said. “Primarily, [it’s about] deleting adjectives and adverbs that are redundant to the acting; tightening a bit for pacing/energy/build when a given word or phrase is unnecessary; in a very few instances substituting a more contemporary word for an obscure, lost one — but the context and the acting generally clarify an out-of-use word.”

LaRue’s collection of stories is a kind of buffet from which organizations — like libraries, schools, historical societies and theatres — can choose. She even suggests thematic “groupings” of pieces in her repertoire.

“I continually add to the roster [of stories] so that my sponsors can choose programs that suit the time of year, a particular holiday, or a theme of their choice,” she said. “Many of the Tales are about senior citizens, covering everything from self-worth to romance. A program of Tales runs from 25 minutes to an hour — again, depending on the sponsor’s needs.”