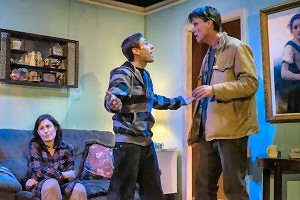 The provenance of a valuable painting discovered in a home in Queens causes friction in a blue collar family in James Bosley‘s Broad Channel, which began a world-premiere run April 30 by the grassroots not-for-profit UP Theater Company in northern Manhattan.

Equity showcase performances under the direction of Kathy Gail MacGowan continue to May 18 at Cabrini Repertory Theater at 701 Fort Washington Avenue in Manhattan.

Bosley is artistic director of the troupe founded in 2010 by theatre artists in Inwood, the northern Manhattan neighborhood. (UP is a reference to Uptown.)

The play’s title and setting is “the marshy isle under the flight path of JFK Airport,” according to UP. The company bills the play as “a biting new drama about a struggling blue collar family that comes to blows when they learn that a treasured painting brought home by Grandpa George, a hero of World War II, is worth a million dollars… and was stolen from a victim of the Holocaust.” 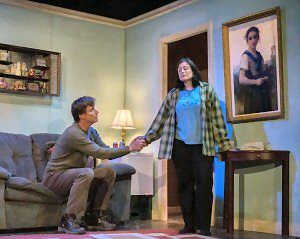 The playwright got the idea for the play after reading a newspaper article. Bosley told me, “The news item that inspired the play was about a Judaic artifact of some kind. Lost during World War II, it was returned with great jubilation to the grandchildren of the original owners in Europe. The details of the article are hazy to me now except for the one line that inspired the play: ‘The manuscript was found in the home of an American G.I.’ It gave no other detail about that end of the story and it got me wondering what might have gone on in that household, where it was held for 60 years. Was there jubilation there as well that their treasure was going home to Europe? Or was it painful to see it go? As a dramatist, I was naturally drawn to the pain.”

The cast includes Matt Higgins, Laura Fois and Andrew Albigese as the American family, with Rik Walter as an opportunistic art sleuth and the late Beaux Arts painter William Adolph Bouguereau, and Elissa Middleton “as the lady who comes to take the painting back to her family home in Belgium.”

Bosley explained the tension between his characters. “The overt conflict is between the Europeans who come to take the painting back, and the American family who are loathe to give it up,” he said. “But the more dramatic conflict is within the family. The dad, Richie, recognizes that forces much greater than himself will have their way despite anything he can do, and so he tries to negotiate a fair deal for the painting. His wife Smitty hangs on to her conviction that the painting is the family icon, is angry that intruders want to take it away and is ready to fight anyone who come in to take it.”

Why the location of Broad Channel?

“Broad Channel, where I lived for a long time and where I still have family, is an island off the lower fringes of the city,” Bosley said. “Literally a fly-over village out near JFK. The people there tend to be insular and suspicious of things foreign. They are also very proud — despite being the poor, overshadowed cousins to Manhattan across the bay. They are bitter that, though downtrodden, they never seem to get the sympathy — nor the funding — that communities who, they believe, use ethnicity as leverage. They are also a community where veterans are revered, their service a caché that buys a lot of indulgences. I always wanted to set a play there but didn’t have the story, until I read the above. It was a great match.”

A moral question of ownership and plunder seems implicit in the situation. 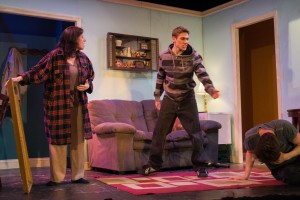 “I wonder about the expiration date on plunder,” Bosley said. “The family in the play, who have lived their entire lives with this painting as the family icon, cannot fathom how someone from across the sea who has never laid eyes on it can claim it as rightfully hers. Legally, of course, they don’t have a chance. But to them, it is not merely a picture that is being taken off their wall, it is their identity as a family, and they can’t give that up easily. There is no painless solution to this conundrum. It is the resentment of it that causes anti-Semitism to rear its hoary head.”

When Bosley writes, what comes first: Strong characters? A conflict? A place? Or does it depend on the play?

“It’s usually more than one thing,” he said. “In this play it was the setting combined with the issue of the stolen art, and one seemed to perfectly complement the other. It’s also accompanied by a nagging question, often one that I’d be afraid to ask out loud, that gets me digging for answers. The answers rarely come, but it’s the digging into them that begets the play.”

Performances play Thursdays through Saturdays at 8 PM and Sundays at 3 PM. Tickets are $12-$18. Get them here. To get to Cabrini Rep, you must take the A Train — to 190th Street. Take the elevator up to Ft. Washington Ave., walk left on Ft. Washington Ave.

Playwright Bosley is the author of UP’s inaugural play All the Best Ingredients, produced in May 2011. Broad Channel is one of two finalists at the Firehouse Theatre Project’s Festival of New American Plays. His previous works have been produced by MCC Theater, The Williamstown Theatre Fringe Festival, Emerging Artists, Fay Simpson Dance Theatre, Impact Theatre, Bad Rep, Red Earth, Qwirk, PROP (Chicago) She’s In The Attic (San Francisco) and elsewhere. 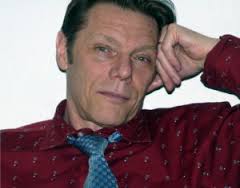 Smith & Kraus published excerpts from his play Epic Poetry in the “Best Stage Scenes” series in 1997. His play Fun, developed at the Eugene O’Neill Theater Center’s National Playwrights Conference, has had many productions in the U.S. and abroad (including translations in German and Flemish) and is published by Dramatic Publishing Company. The film version of Fun, for which he wrote the screenplay, was shown in competition at Sundance and other festivals, and opened commercially at the Film Forum in New York City. His screenplay for it was nominated for an IFP Spirit Award. He has received residencies from the Edward Albee Foundation, Yaddo (twice) and The MacDowell Colony and was named to the selection panel for the Bronx Council on the Arts 2011 BRIO Awards. Bosley was the founder, producer and artistic director of The Summer Play Party at MCC which produced plays by NYC high school kids with professional actors and directors.

UP Theater Company is devoted to “provocative new work by contemporary playwrights.” The mission is “to present fully produced, professional theatre to its community in Northern Manhattan, employing many local artists who call this corner of the city home. Despite our parochial concerns, UP is no ‘community theatre.’ We eschew crowd pleasing chestnuts in favor of new work that challenges our audience’s preconceived notions of who they are and what they think they think; work that is relevant to our Uptown urban environment and unafraid to be gritty, rambunctious and irreverent. Ultimately, we envision a theatre that will be a destination for theatregoers from all across the area, drawn by work of quality and passion.”

Read more about UP Theater Company’s past work here.