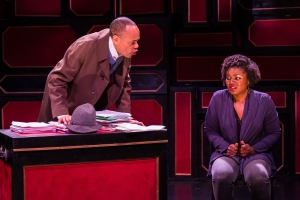 The swirl of wind, the chaos of rain and the roar of thunder, all capricious elements of Shakespeare’s The Tempest, seem to inform the twisty, whimsical nature of Lila Rose Kaplan’s new poetic two-character play The Magician’s Daughter, which borrows Prospero and daughter Miranda from the Bard’s late romance to create an intimate, contemporary family portrait. Geva Theatre Center in Rochester, NY, is giving the play its world premiere Jan. 24-Feb. 10 at the 180-seat Fielding Stage.

Kaplan told me, “I saw a stunning production of The Tempest at A.R.T. a few years ago. The actress who played Miranda was fierce. She was unlike any Miranda I’d ever seen. I was drawn into her story and her complex relationship with Prospero. Soon after, I saw Venus in Fur at the Huntington and was compelled by the theatrical nature of that two-character play. I started to feel a play about Miranda, the magician’s daughter, brewing in my mind. I imagined a series of French Scenes like The Blue Room. Prospero and Miranda’s roles would shift radically from scene to scene. Each new world would reveal different aspects of their relationship.”

This is Geva’s second world premiere this season following Hard Cell by Brent Askari, which also launched in January 2019.

Here’s how Geva Theatre Center bills The Magician’s Daughter: “The Magician Prospero and his daughter Miranda dazzle their audiences until the day Miranda quits. This funny bittersweet play dives deep into the ups and downs of a father-daughter relationship. Viewer discretion advised if you have a father or a daughter (or know anyone who does).” 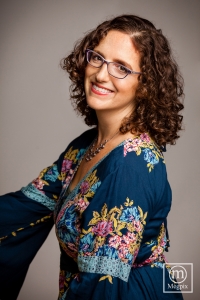 Lila Rose Kaplan, whose work has been produced and/or developed by A.R.T., South Coast Rep, Merrimack Repertory Theatre, New Victory Theatre, Second Stage, Huntington Theatre, Trinity Rep, Arena Stage, Kennedy Center, Ensemble Studio Theatre, Center Theatre Group, The Lark and beyond, answered a handful of my questions about her new play. Learn more about her work at her website.  (By the way, Her play 100 Planes will get its world premiere at Filigree Theatre in Austin, TX, April 4-13, 2019. Also, The Chapel Play will be featured at Barrington Stage’s 10×10 Festival Feb. 14-March 10, 2019, in Pittsfield, MA.)

How is The Magician’s Daughter different from (or similar to) your other work?

Lila Rose Kaplan: The Magician’s Daughter is similar to my other plays in that my plays shine light on stories we don’t tell about women. I write heartfelt, fantastical plays inspired by powerful questions of our time. Typically, the fantastical elements of my plays amplify unheard female perspectives. In The Villains’ Supper Club, I transform a brand new mom into a superhero in a comic book. In Jesus Girls, I offer the microphone to Christian young women who are gay. They share the collision of their faith and sexuality through their Christian Lesbian Rock Band. In Home of the Brave, I highlight the absurdities of what happens when a woman runs for office. My plays are fantastical in their nature and potent in their themes. I’ve been accused of writing children’s plays for adults, which I take as a great compliment.

The Magician’s Daughter differs from my other plays in that it’s quite adventurous with structure and form. My signature heartfelt fantastical nature is still there, but it’s realized through a new architecture. Also, there’s magic!

Can you can share a little bit about your early encounters with theater, and what impact those encounters had on your career generally and this play specifically?

Lila Rose Kaplan: When I was growing up, my parents took me to see musicals in New York and that definitely whetted my appetite for the fantastical and the heartfelt. Also, my high school had a magnificent performing arts program. Something I value about that program is that we made a lot of stuff, so by the time I graduated from high school, I had choreographed a dance, written a play, written a song, run a light board and performed in a number of shows. I was given theatrical authorship really early and for that I am grateful.

I’ve always loved writing, I think that’s deep inside of me. I couldn’t imagine not writing. Growing up, I also loved science and math and I loved dance. I loved singing and performing and making people laugh. I kind of loved everything. I was a little renaissance woman. Playwriting found me when I was in high school. My first play was a comedy called Busy Signal, about a couple who doesn’t believe in using the phone. My high school produced it and I remember standing in the back of the theatre watching the show. I remember thinking that playwriting is this amazing collision of the things I love. I can be Emily Dickinson upstairs writing a poem in the attic and I can also be Lucille Ball downstairs in the theatre, making people laugh. Playwriting had found me and I was hooked.

Lila Rose Kaplan: As a playwriting student, I was shaped by goddesses. When I was an undergraduate at Brown University, Paula Vogel took me under her wing and Sarah Ruhl mentored me in making meaningful magic on stage. After college, I took a workshop with Maria Irene Fornes and she encouraged my gritty mystery. When I was a graduate student at UC San Diego, Naomi Iizuka taught me to collide craft with mystery and Adele Shank unequivocally believed in my voice. I am grateful to all of these women. They welcomed me to the tribe when I was too young to understand what a gift I was receiving. 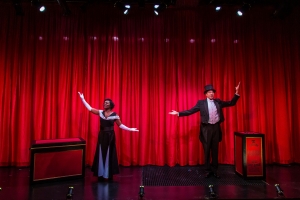 Can you share a little about the development of The Magician’s Daughter? It begins as a presentational magic show, with Prospero promising illusions and Miranda in the position of assistant. It splinters from there.

Lila Rose Kaplan: I wrote the first draft on a silent playwriting retreat led by Erik Ehn. One day Erik prompted us, “Walk all the way around the play you’re writing, like it is a building. Did you miss anything?” In that moment, I realized that there was a second half. A secret second act. A realistic father-daughter conversation, quite the opposite of the fantastical first part. So, the play and its structure of constant reinvention was born in a series of flashes, I would say. And one great question from Erik Ehn.

Soon after, I shared it with my writing group at the Huntington Theatre. They gave me feedback and encouragement. Two summers later, the Huntington workshopped the play as part of their Summer Festival.  During that workshop, The Magician’s Daughter transformed from a potent elemental sketchpad into a living, breathing play. Fast forward two more years and director Shelley Butler was looking for a play to do with Geva Theatre. My agent, Leah Hamos, shared [it] with them. Shelley and I had been looking to collaborate for some time and this play was a terrific fit. Shelley is a fierce, fabulous sorceress of directing. She has a deep familiarity with magic shows, which was key to unlocking the production and the design for The Magician’s Daughter.

Once Geva committed to the play, Shelley and I orchestrated a series of readings to support my rewrites before we started rehearsal. With each reading and subsequent rewrite, we learned more and dug deeper. We worked with Jenni Werner, Geva’s resident dramaturg, who brought a fresh ear and the most wonderful questions. I am voracious re-writer and it was a delight to have a supportive team throughout my revision process. So often new plays are developed piecemeal. It’s rare to have an integrated process like this one was. Over the course of the year, we developed a common language for investigating the play. 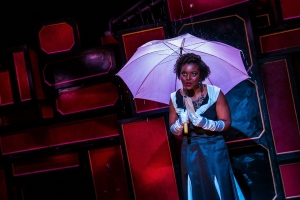 Our final reading was at Geva as part of their Festival of New Theatre. It was a month before we started rehearsals and it allowed me to fine-tune the first half of the play and significantly rewrite the second half.  For the production, we were fortunate to cast Brittany Bellizeare and Tyrone Mitchell Henderson, who shine as Miranda and Prospero. Their questions and feedback through the rehearsal process helped me with final touches on the script before we opened. The script also grew tremendously from my conversations with our magic consultant, Michael Weber.

Where do you live now, and what’s your writing routine like? Do you juggle multiple projects?

Lila Rose Kaplan: I live in Boston. I typically write three-to-four days a week. Sometimes more, sometimes less. I have a four-year-old (or as my husband and I like to call her, a crazy cruise director), so sometimes my fate is not in my hands. I do work on multiple projects, but I try (when possible) to focus on one project per month so I can work more deeply. Currently, I’m working on the first draft of Spa Gods, my farce about a fertility goddess who retires when Trump is elected.