Jenny Case and Daniel Stewart in the Wyoming developmental run of “Alice Formerly of Wonderland.” (Photo by H Michael Roberts)

Mark Saltzman’s fact-inspired new play Alice Formerly of Wonderland: A Musical Story of the Real Alice is among titles in the 2016 Wyoming Theater Festival, a startup initiative now in its second season devoted to developmental productions of new works and revivals of plays and musicals. The playwright was recently in residence in Sheridan, Wyoming, with other guest artists, including director Kent Nicholson, to stage the new music-kissed play, scheduled for a July 18-29 run in the 85-seat black box space called the Mars Theater. Saltzman shared some thoughts about his new work. 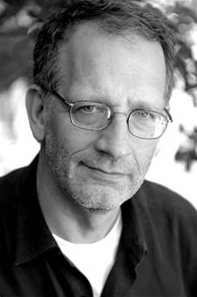 WyoTF producing artistic director DannyLee Hodnett also offered some background about the festival. You’ll find that quick Q&A at the bottom of this piece. But for now, let’s focus on Saltzman’s new script about the inspiration for Lewis Carroll’s “Alice” books.

Saltzman is known for his regional and Off-Broadway musical The Tin Pan Alley Rag, the TV movie “Mrs. Santa Claus,” the feature film “The Adventures of Milo and Otis” and the plays Rocket City, Alabam and Mr. Shaw Goes to Hollywood. He was a co-writer of the hit Off-Broadway revue A…My Name Is Alice (a celebration of womanhood, not Wonderland). Visit the playwright’s official website. He’s repped by Mark Sendroff. 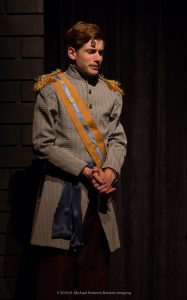 Here’s how Wyoming Theater Festival (WyoTF) characterizes Alice Formerly of Wonderland: “It’s about Alice. Yes, that Alice — Alice Liddell, who, as a child, was the inspiration for Lewis Carroll’s immortal story. Now Alice is in her teen years, living at Oxford where her father serves as a Dean. History tells us that in 1871, Prince Leopold, youngest son of Queen Victoria, enrolled in Oxford and was enchanted by the famous and beautiful Alice. This romantic comedy tells the tale of the Prince’s courtship of Alice and the Queen’s furious objections. All is accompanied by well-known songs of the era and a few glimpses of the creatures of Alice’s Wonderland.”

Seven performances featuring Equity actors were offered July 18-29. (This summer WyoTF is also producing a developmental production of the new play East of Heart Mountain by Edward Allan Baker, directed by Giovanna Sardelli; the Johnny Cash revue Ring of Fire; and the cabaret show Cast of Thousands — The Songs of Craig Carnelia.) 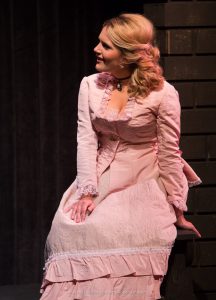 I’m always interested in a playwright’s first inspiration for a new work. What inspired Alice Formerly of Wonderland? As a dramatist, what did you “see” first? A character? A conflict? A world?

Mark Saltzman: The first inspiration was Kate Middleton. During that stretch when the world was celebrating the commoner bagging the prince, there were references made to the rich history of royal/non-royal liaisons, like Nell Gwynne and King Charles II, which is of special interest to theater geeks, since Nell was a star of the stage. Somewhere in all that endless coverage, Prince Leopold, son of Queen Victoria, was mentioned as a romantic partner of Alice Liddell, Lewis Carroll’s muse. My fingers began Googling, and there was a story waiting to be told. 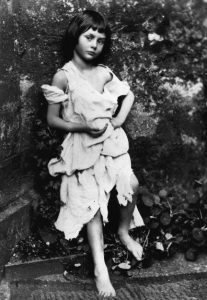 Are you an expert or fan of “Alice’s Adventures in Wonderland” and its related books?

Mark Saltzman: Not an expert, but well-versed. Especially due to “The Annotated Alice”  being the first book of literary analysis that I ever touched, and I was hooked at a young age to this completely new way to approach literature. That book seems to be a common denominator and incubator, where future English majors were created.

What attracts you to this real-life story?

Mark Saltzman: I was attracted to the story of Alice and Prince Leopold since, on the surface it seemed like a real-life fairy-tale about a girl who inspired a fairy tale. But in real-life, fairy tales don’t necessarily have happy endings, and the ending of the Leopold and Alice relationship, whatever it was, was not the ending of a Disney movie. How could it be? Think of his mother! 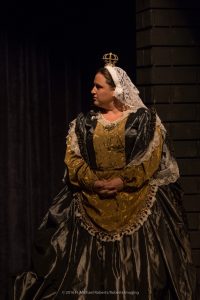 Beyond the marketing blurb, give a little more sense of the story and characters?

Mark Saltzman: What we know, historically, is that Prince Leopold matriculated into Christ Church College, Oxford, in 1871. And we know that Alice Liddell lived at Oxford; the daughter of the dean of Christ Church. I imagine Alice, being perhaps the most famous non-royal teenage girl in England, might have been deeply affected by her fame, maybe even imagining that her stardom made her entitled to a prince. Plus she was a faculty brat, so it’s hard to imagine her with any measure of humility.

Is Lewis Carroll in the play?

Mark Saltzman: He is a presence, but he doesn’t appear. He was still teaching mathematics at Oxford in 1871, but he was also very occupied managing the “Alice” media empire. Fortunately, as a mathematics instructor, he could add well and calculate percentages — essential when determining the royalties of “Alice” theatrical presentations. 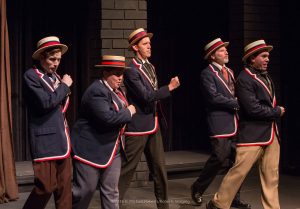 What role does music play in this work? What classic songs might we know? Is it a musical — or are you still trying to figure out its identity?

Mark Saltzman: Music certainly drives the show, like most of my theater pieces. I’ve always been attracted to theater and film pieces that heavily depended on music. Then as now at Oxford, the students sang in a cappella groups. I used a group of Gentlemen Singers to provide the music for the show, using songs of the period, like “Annie Laurie,” “Beautiful Dreamer” and some traditional Oxford University songs. (To my surprise, there are no Oxford college fight songs. That’s an American invention.) The cast is six actors, and true to the a cappella style of 19th-century Oxford, the singers are unaccompanied.

Nick Ley as the Caterpillar with Jenny Case. (Photo by H Michael Roberts)

The world “through the looking glass” is fantastical. How important is design to this project? How “realized” is it in the developmental run in Wyoming?

Mark Saltzman: We included one fantasy character, because Alice Formerly of Wonderland is still an “Alice” story. That character is the mushroom-friendly caterpillar, who Alice approaches for advice, just as the imaginary Alice did in the book. Our caterpillar gives her advice on matters of the heart, but offers no bits of porcini or portobello.

What does director Kent Nicholson — respected for nurturing writers and shows at places like Playwrights Horizons and California’s TheatreWorks — bring to the table? How long has he been attached? 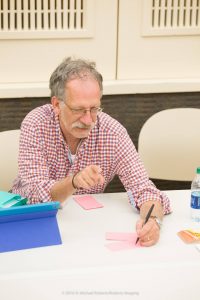 Mark Saltzman: I’m happy to say Kent was there at creation, from the first read-through in North Hollywood last spring, to the full Wyoming Theater Festival production, which is the first time the piece is before an audience. Kent is sensitive to the musical elements of this show, keeping it all balanced on that edge between play and musical, between realism and fantasy. He was walking two tightropes at once and never lost his footing.

Did you do rewrites in Wyoming?

Mark Saltzman: There were more cuts than rewrites. I have a tendency to over-write first drafts, so in rehearsal we started cutting down scenes and songs.

What’s next for the piece?

Mark Saltzman: We’d like a regional or New York production.

What’s been the major obstacle for you as a writer on this? What keeps you up at night?

Mark Saltzman: My first encounter with live show business was in the Catskill Mountain hotel showrooms. So I have to say, I was a little worried that I could get away with writing dialogue for British Victorians.

How did your play come to the Wyoming Theater Festival?

Mark Saltzman: Last year, I had my musical Romeo and Bernadette featured in the festival. They invited me back, and, now more knowledgeable of the audience, both the local people and the visiting theater types, I came up with something I hoped would please everyone. “Alice” is one of those universals.

Mark Saltzman: I’ll only get a brief time to recover from Wyoming, then I’ll be heading to Chicago for the opening of a rock musical I wrote with Berton Averre and Rob Meurer. It’s a 1960s speedway comedy called Helldrivers of Daytona. A long way from Oxford, so it’ll be more motorheads than Brideshead. 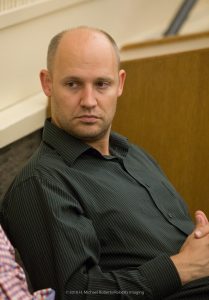 Who founded the festival?

DannyLee Hodnett: I founded it with the help of local community organizations such as the Chamber of Commerce, Sheridan Travel & Tourism, Sheridan College, and the like.

Is it accurate to say the mission includes fully produced productions and developmental productions of new works?

DannyLee Hodnett: Our mission is focused on developing new work and revitalizing works which, although they have been produced, would still benefit from an intensive development experience. We do, however, produce some work outside of that range. For example, Ring of Fire is being produced because it is a huge audience draw and Lucky Stiff is being produced by a company made up of junior and high school age kids as a part of our educational outreach efforts. 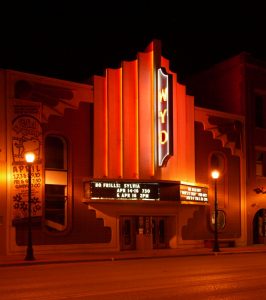 The WYO Theater in Sheridan, WY.

How many venues are within the WYO Theater complex?

DannyLee Hodnett: There are two venues within the WYO Theater. One is Sophie’s Stage, a historic vaudeville stage with a house of 483 seats. The other is the two-year-old Mars Theater, a flexible black box space which seats 50-125, depending on its configuration. This season, it seats 85.

Do all shows work under an Equity contract?

DannyLeeHodnett: Each [non-student] show gets at least two AEA contracts. Cast of Thousands is a one-man show, so I guess that show only gets one AEA contract if you want to get technical.

The festival is not-for-profit?

DannyLee Hodnett: The festival benefits from a partnership with Sheridan College. The college is our fiscal agent, so we have the same tax exempt status they do. Donations to the festival are tax deductible. We are funded by a mix of local, state, and federal grants as well as benefiting donations from generous individuals and from businesses and organizations.

Here’s how the organization characterizes itself: “The Wyoming Theater Festival (WyoTF) is an immersive theater experience connecting playwrights, players and community in fostering the evolution of new and revitalized theatrical works. At the WyoTF, you will see the next big play before it becomes the next big play in New York, Chicago, Los Angeles, and beyond. Our audiences rub shoulders with professional actors, directors, and playwrights from around the nation in a series of performances, backstage tours, discussions, workshops, lectures, readings, gatherings – a full program of attractions to engage, delight, and stimulate theater fans. The Wyoming Theater Festival — launching tomorrow’s plays today from one of the most beautiful landscapes in the West!”