“Lend Me a Tenor” Now Has a Sequel; Catching Up With Playwright Ken Ludwig 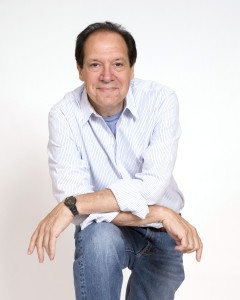 Tentatively titled Tito’s Revenge, it takes place in 1936, two years after the action of Lend Me a Tenor, the Tony Award-nominated Best Play that has had two Broadway productions (1990 and 2010) and hundreds around the world (there’s even a musical version that played U.S. regional theatres and then London in 2011; Ludwig did not write the libretto). Tito’s wife Maria will also return for the sequel.

“The love story centers on Tito and Maria’s daughter,” Ludwig explained. “It’s set in Paris during a big international soccer game, when Saunders has the gotten the insane idea that no one has ever thought of before: to do a concert called The Three Tenors. The three tenors are Tito; Max, who has now become a star; and a young up-and-coming, very hot Italian American star named Carlo Nucci.”

Why not call it Lend Me Three Tenors? 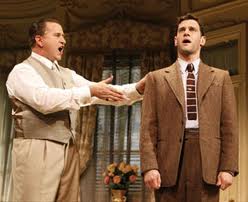 Anthony LaPaglia as Il Stupendo and Justin Bartha as Max in the 2010 Broadway revival of “Lend Me a Tenor.” (Photo by Joan Marcus)

“That’s a thought, isn’t it?” he said. “That’s all to come. I change titles all the time…” The script is currently making the rounds of theatres and producers. No production has been announced for Tito’s Revenge. (And the title is not related to a same-named pistol holster on the market.)

Ludwig said he likens the Tenor/Tito pairing to the way Pierre Beaumarchais’ related comedies The Barber of Seville and The Marriage of Figaro spoke to one another. “Barber of Seville is a real knockabout comedy — something really fun, really funny, tons of fun — but [I wanted] to address other things [as] Marriage of Figaro does when Beaumarchais wrote it a few years later.” The comic Figaro was a social satire critical of the class system in France; Revolution followed.

About 90 percent of Ludwig’s projects — his titles also include The Fox on the Fairway, Leading Ladies, Shakespeare in Hollywood, Moon Over Buffalo and the Tony Award-winning musical Crazy for You, among others — spring from his own imagination rather than from an assignment or predetermined commission, he said. The Game’s Afoot or Holmes for the Holidays, his comedy-mystery riff on Sherlock Holmes, for example, was an original idea. It’s had “dozens and dozens” of productions since its 2011 world premiere at the Cleveland Play House. (The next Equity stagings nationally are at The Water Tower Theatre in Addison, TX, Dec. 13-Jan. 5, 2014, and Gulfshore Playhouse in Naples, FL, Feb. 21-March 16, 2014.) 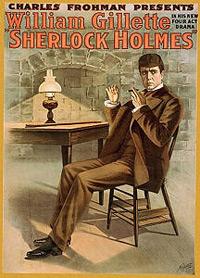 Arthur Conan Doyle’s legendary detective gets a fresh spin in The Game’s Afoot, for which the playwright drew from the 1899 play Sherlock Holmes by Doyle and American actor-writer William Gillette (1853-1937). Gillette toured with the play in the early 20th-century, getting rich off it. The comedy pulls not from the earlier plot, but from theatre history. In this fictional romp, the hero is Gillette himself, who invites his quirky theatre friends to his lavish “castle” on the Connecticut River to figure out who made an attempt on his life. It takes place on Christmas Eve during a winter storm — the sort of tempest that knocks out power and phone lines.

“I’m a Holmes fan,” Ludwig explained by telephone from his home in Washington, DC. “I wrote a play about Gillette with the same kind of setting many years ago — one of my earliest plays, called Postmortem. In many ways I felt I never quite nailed it, the mystery of it or the story. At some point, I thought, ‘I’ve always wanted to revisit that old play.’ I always thought the basic setup was a good one. I sketched out some ideas and off I went.” 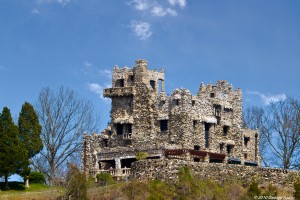 Ludwig has toured Gillette Castle, an expansive and idiosyncratic fieldstone-and-oak, medieval-style home now open to the public as a state park in East Haddam, CT. The manse is a character unto itself in the play, boasting a secret room, electronic gadgets and convenient weaponry displays. (In real life, Gillette rigged up a series of mirrors so he could view parts of his property without being detected.)

“It really does capture the man,” Ludwig said of the real home. “It’s so eccentric. When you look at his pictures, he looks like straight-shooter — he was a heartthrob and such a success in his profession. One tends to forget until you get to the castle that he had a real crazy streak in him: He had a [miniature] railroad going around [the property], all these tricks — he could look at who was at the front door from his bedroom… I came away from it thinking he was a true American eccentric.”

Ludwig’s script for The Game’s Afoot indicates that Gillette Castle has opulent art deco décor, but the real castle is less “Hollywood” than that. It’s murkier and more weirdly medieval. Why the change? 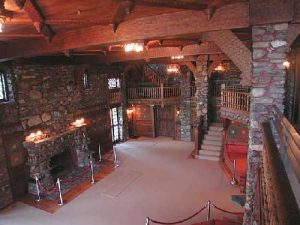 The real interior of Gillette Castle in East Haddam, CT.

“I just thought it would give it a little more pizzazz and fun and color,” Ludwig explained. “When I first wrote Lend Me a Tenor, in my original stage directions I wrote, ‘a typical Cleveland hotel of the period,’ which would be heavy red curtains. I’ll never forget when [scenic designer] Tony Walton got ahold of it: He did it in a high art-deco style. It goosed the place up: It made it more beautiful and more eccentric and more alive. We’ve all been in those gloomy castles, so I sort of imagined that this is what Gillette would have done had he lived a little longer and decided to put some of his money into redecorating.”

He added, “In the first big production, at the Cleveland Play House, the set designer did a great job of keeping some of the elements of the castle. In a sense, it looked like the castle with some added pictures and design elements.”

“The game’s afoot” is a famous Holmes line, but its origin is in Shakespeare’s Henry V. Ludwig, a Shakespeare maven who recently published the book “How to Teach Your Children Shakespeare” (from the publisher Crown), delighted in peppering his play with Shakespeare quotes spoken by blowsy show people. 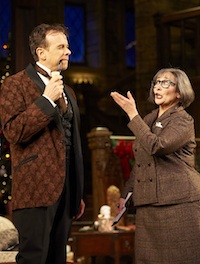 “One of the things that’s always fun for me is to write about people in the theatre, the way people act in the theatre,” Ludwig said. Gillette was a delicious character for Ludwig to work on, “somebody who was clearly a Shakespeare fanatic and loved the sound of his own voice.”

Ludwig is a fan both the mystery genre and light screwball comedies of the ’30s, and sought to indulge in conventions from both forms for The Game’s Afoot. He said, “I try to touch on loads of those wonderful things we love about Nick and Nora [movies] and the Agatha Christie stories: an old British detective…the happy, gay Noel Coward-like couple….the young people who seem to have secrets….the hidden room! It gave me a chance to do all the fun things I love in the theatre.”

Ludwig said that he also recently wrote Baskerville, a frisky five-person stage adaptation of the Doyle novel “The Hound of the Baskervilles,” a Holmes & Watson classic. A comic take, Baskerville, he said, is still “faithful to the book…it doesn’t spoof it. Hopefully, when the hound is roaming you’ll be plastered to the back of your chair.” (It’s not to be confused with a three-person comic adaptation of the book that surfaced in England in the last decade, around the time of the vest-pocket stage romp The 39 Steps.)

Meanwhile, “How to Teach Your Children Shakespeare,” released over the summer, has an introduction by John Lithgow and is dedicated Ludwig’s kids, Olivia and Jack, who inspired it. 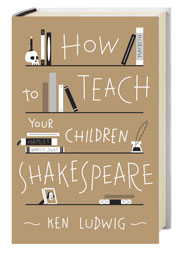 The 346-page book is designed to spark a passion for Shakespeare, his theatre, his poetry and his world. It invites parents (and teachers beyond the home) to engage children in memorization exercises addressing famous passages from plays, providing a clear guide for this process and explaining the seemingly unreachable passages in simple language. It’s literally baby steps toward the genius of the bard. (I’ve been attending Shakespeare plays for 30 years and found the book to be a great refresher course, reminding me when and why I fell in love with Shakespeare, and how the effort is always rewarded by layers of depth and meaning and color.)

Ludwig explains: “One of my children [Olivia], the older of the two, came home from school in first grade, she was six years old, and she spouted a line of Shakespeare, which is the first line in the book: ‘I know a bank where the wild thyme blows.’ [From A Midsummer Night’s Dream.]

“To my surprise, she had a teacher who had taught them that line. I thought, ‘I love this stuff, I live and breathe it, maybe it’s not too early to start teaching them a little but about Shakespeare.’ Because she memorized that line, I said, ‘Let’s try the second line of that together. And the third. And the fourth.’ It’s only a 10-line passage, and she learned it with great ease. Kids at that age love memorizing stuff, they’re such sponges. And we did it until the day she left for college. And I did it with my son when he came along.”

Did he keep notes over the years? Did he think there was a book in this? “I didn’t keep notes at all, I never thought it was book,” Ludwig said. “I kept notebooks filled with the passages that we learned. By the time she went to college, which is about the time I started writing the book, I had about eight full notebooks. I’m talking 75 to 100 passages. And they got more and more complex as she got older. If you look at one at the end of the book, they’re ones you’d teach to kids 14 or 16. They get harder and harder. It covers the span from the time she was six years old to the time she was maybe 16 years old.”

What was Ludwig’s first brush with Shakespeare? His hometown of York, PA, was not a hotbed of classical theatre.

“When I was a kid I must’ve shown some interest in public speaking, I was probably about 10 or 12,” Ludwig said. “My parents had seen, about ten years before, Richard Burton’s Hamlet on Broadway. Mom was from Brooklyn and she’d go back to visit her sister and mother once a year, and for some reason they had seen that. And the LPs came out. It appeared on LPs, the entire play. A recording of Richard Burton playing Hamlet, with Hume Cronyn and the full cast, it was directed by John Gielgud. They gave it to me for my birthday. And I started listening, and I listened and listened and listened, and wore the set out. I learned all the soliloquies, and just loved it. I was hooked, hooked, hooked from then on.” 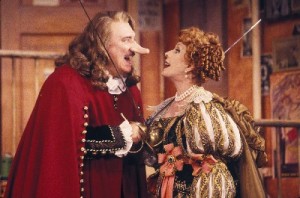 Most people in the United States don’t get introduced to Shakespeare until high school or college.

“There are so many words that we don’t know [in Shakespeare], and there’s so much syntax that seems odd because the verbs in front of the noun. So even adults — most adults — are frightened of it: They go, ‘Oh, my God, I tried to read a page of it, I can’t read that.’ What I talk about is: If you can, read it very slowly, make sure you understand every word, just take two lines and start. Make sure you understand every word of those two lines, and then memorize those two lines. Suddenly, the curtains part. It’s demystifying. It’s beautiful, it’s not frightening.”