“The Gin Baby,” a New Play About a Woman on the Verge, Premieres in NYC 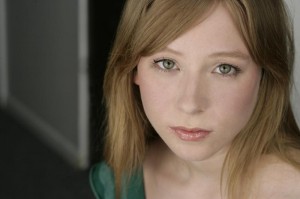 Playwright Sarah Shaefer’s The Gin Baby, about a desperate woman who finds herself on the edge of a subway platform, gets its world premiere in an Off-Off-Broadway staging Jan. 19-Feb. 2 at the IRT Theater in Greenwich Village.

Here’s how The Gin Baby is billed: “No longer able to self-medicate with alcohol and in a desperate search for escape, a young woman finds herself standing on the edge of the No. 1 subway platform. She faces the train as it roars into the station, and then faces the consequences as she commits herself to a psych ward in one last attempt to commit to herself.”

“Without giving anything away,” Baltimore native and current New Yorker Shaefer explains via email, “the main character is an open wound, and she keeps rubbing up against people who feel like salt to her, so she becomes more and more hurt.  There’s a saying: ‘If the pain of the pain is greater than the pain of the change, you’ll change.’ So basically it’s about whether she’s in enough pain to change.” 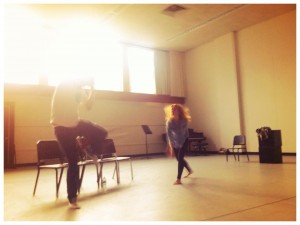 A rehearsal moment for “The Gin Baby.”

Shaefer says that news reports about subway tragedies did not necessarily inform her play. The play “is a mix of imagination and personal experience.”

The subway setting was not the first image she had when she was creating the play. Shaefer says she wrote the work intuitively, in “a stream-of-consciousness” process, and the subway idea eventually emerged. “Several events that lead up to the main character finding herself on the train platform,” explains Shaefer, who says that she admires the plays of Marcus Gardley, Jose Rivera, Daniel Talbott and Stephen Adly Guirgis.

The premise of the 85-minute drama sounds serious. Does the playwright feel a responsibility to offer hope in this story — is an expression of “hope” of interest to her in when writing plays? 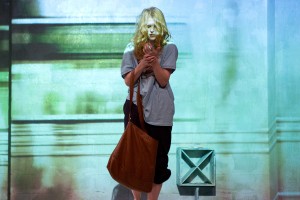 Lesley Shires in “The Gin Baby.” (Photo by Hunter Canning.)

What does the title — The Gin Baby — mean?

“The title of the play is revealed within the play,” she teases. “You’ll have to come see it to find out!” 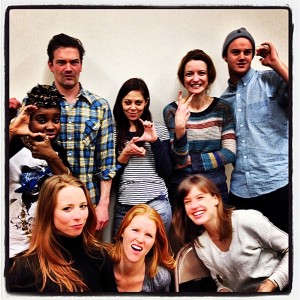 The company of “The Gin Baby.”

Talbott, who first met Shaefer when she was an intern more than 10 years ago at New River Dramatists in the Blue Ridge Mountains, says via email, “I love that she dove into this play and story with no fear, and I love how uncompromising it is: It mixes the inner and outer life of Amelia as she completely falls apart in a way that is as messy and open as a wound, but with a huge amount of love and respect for the character and the story and the stakes.”

He adds, “I love that she doesn’t protect herself or her characters in any way, and that we hopefully feel along with Amelia what it is to be completely vulnerable and raw — emotionally, sensorily, physically — in this city and life that can be so punishing and hard, with mental illness and addiction having its claws in her really deep.”

The not-for-profit IRT Theater is in the old Archive Building in Greenwich Village at 154 Christopher Street, #3B, third floor The venue is “a grassroots theatre development laboratory providing space, support and community for independent artists.” Kori Rushton is artistic director.