The Brilliance of Oscar Hammerstein, in the Bargain Bin 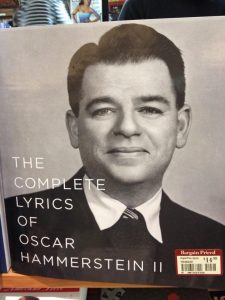 The book as it looks on the shelves of Barnes & Noble in Union Square.

In a recent rainy-day exploration of the Barnes & Noble in Union Square, I came across “The Complete Lyrics of Oscar Hammerstein II” (Knopf, 2008) on the bargain shelf, for $14.95. Original price: $65. At bn.com? $7.99! At first, it made me sad to see the genius reduced to bargain-bin prices, and then I realized that people who might not be able to afford the original price of this handsome volume can now have access.

This is an essential book that belongs on the shelf any serious theatergoer, and not just because my friend and colleague Amy Asch edited it. We often talk of the revolutionary nature of Rodgers & Hammerstein musicals — the embrace of serious topics and social issues in plots (Show Boat, Carousel, South Pacific, The King and I); the weave of libretto and lyrics in structure (Carousel‘s “bench scene,” for starters); the naked intimacy and theatricality of interior thoughts in songs (Carousel‘s “Soliloquy” or South Pacific’s “Twin Soliloquies,” the verse of “Hello, Young Lovers” from The King and I).

Yes, R&H musicals wove book, music, lyrics and (with their choreographic and directorial collaborators) dance like no other writers before them. But as Stephen Sondheim reminded me in a 2010 interview I did with him: “Hammerstein’s the one who started the revolution. Not Rodgers, it was Hammerstein. I mean, it started with Show Boat. …I’ve said often, he’s rarely recognized as the experimental playwright that he was. …I compare him to Eugene O’Neill, because O’Neill was also an experimental playwright. And, both of them, their language did not soar in the way their imaginations did.”

I asked Sondheim whether the map of 20th-century musical theatre would have been very different without Hammerstein’s serious-minded, sprawling, ambitious Show Boat (1927). He replied, “Well, look, that’s one of those metaphysical questions: ‘If it hadn’t happened, would . . . ?’ I think somebody else would have come along and done it. I mean, you know, art moves forward. It wouldn’t have stayed in the backwater forever.”

Check out my Playbill.com interview with Sondheim, who talked a lot about his mentor Hammerstein.  And get “The Complete Lyrics of Oscar Hammerstein II.”