A Fine Bromance: How Benjamin Scheuer’s “The Lion,” a Cult Hit Musical, Found Its Roar 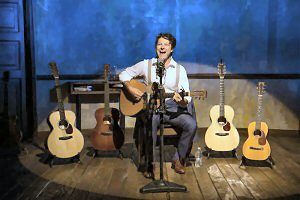 Benjamin Scheuer in “The Lion.” (Photo by Matthew Murphy)

I spoke with director Sean Daniels and singer-songwriter Benjamin Scheuer about the creation of the one-man musical The Lion, an Off-Broadway favorite now making the rounds of American regional theatres, including a run Aug. 26-Sept. 20 at Massachusetts’ Merrimack Repertory Theatre, where Daniels is artistic director.

Singer-songwriter Benjamin Scheuer freely confesses to telling a little white lie when Connecticut’s Goodspeed Musicals asked him if he was working on any shows that might benefit from “workshopping” as part of the troupe’s 2013 winter writers’ retreat. He accepted a residency offer, but he didn’t have a musical. 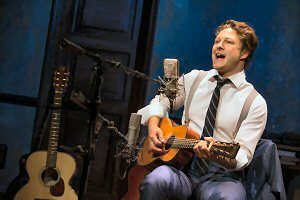 What Scheuer (pronounced SHOY-er) did have was a handful of autobiographical songs that were heard on “The Bridge,” the second album from his pop-folk band Escapist Papers. He’d been playing guitar and singing them at such Greenwich Village spots as Cornelia Street Café and Vagabond Café. “To better connect the songs to one another, and to better frame each song, I’d been writing down and memorizing my between-song banter,” says Scheuer. “I was not writing a musical. This was not a musical. But I told Goodspeed that, sure, I was working on a musical. I said it was called The Bridge.”

A combination of luck that January, when stage director Sean Daniels was also in residence at Goodspeed, and hard work during the following year would nevertheless lead to the construction of an acclaimed one-man musical, The Lion, Scheuer’s guitar-and-voice coming-of-age tale that has played Scotland’s Edinburgh Festival Fringe, London’s St. James Theatre, two engagements Off-Broadway and now a national tour of not-for-profit American theatres, through 2016. Running a lean 70 minutes, with 33-year-old Scheuer moving between six guitars, three chairs and several chunky microphones, he unspools the story of his youthful artistic angst, a failed romance, a harrowing brush with leukemia and the premature death of his father from a brain aneurysm, an episode made worse by unresolved parent-child tension. 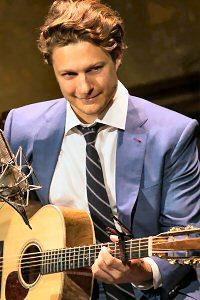 In the plaintive opening number, Scheuer, channeling the simplicity of a James Taylor or a Paul Simon, ruefully sings of his businessman father’s early influence on him:

Daniels, who is artistic director of Merrimack Repertory Theatre in Lowell, MA, one of the stops on The Lion‘s current tour, recalls early discussions with Scheuer, after their chance meeting on Goodspeed’s snowy campus in East Haddam, CT, where they were working on separate projects in houses next door to one another. Daniels says, “I believe I was the one director who told him: ‘I don’t think you actually have a musical yet — we’d have to take it apart and start over.’ He has an amazing personal story, but a lot of people lose their fathers and a lot of people beat cancer. What is it that we have to say that is different?” 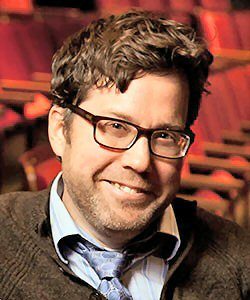 “Sean understood, from a very personal place, the kind of songs I was working on,” says Scheuer. “Sean had recently been in a relationship that had ended badly; his father had recently died; and he’d battled a life-threatening illness.”

The questions and encouragement that Daniels offered Scheuer prompted the songwriter to expose himself in a “dangerously honest” way, the director explains. For example, a bitter fight between a teenage Scheuer and his father goes unresolved when dad suddenly dies. The son had written an acidic letter to his father, telling him he never wanted to be like him.

“The idea was to put it all out there,” says Daniels. “He was kind of a crappy kid and his dad wasn’t the perfect guy. That’s actually the story of everybody, deep down inside. There’s a real power to be able to name those things that we normally don’t say in public. That is what we were constantly trying to tease out in the story.”

Daniels did more than merely create the physical staging for The Lion, he put pressure on Scheuer to keep digging deeper as a dramatist. In one of their later workshop meetings, when they were hosted by the Weston Playhouse in Vermont, Daniels asked Scheuer, “Why don’t you write your dad a letter now, telling him how your life is going?” 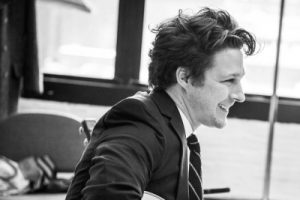 “That made him burst into tears, just thinking about it,” Daniels says. “Then he began to work on what that letter would be. Now, it’s the song ‘Dear Dad,’ the penultimate song. The thing that we eventually tapped into is this idea that great things can come from awful things.”

“Going to Weston for a week with Sean was very much a first date,” Scheuer says of their early collaboration. “We found out what it was like to work with one another. I’d write from 6:30 AM to 10:30 AM, at which point I’d come out of my room, exhausted, and show Sean what I’d done. And then we’d make breakfast. Sean makes very good breakfast. And then we’d go hiking in the afternoons. We talked about our fathers. We talked about girls. And we outlined the show on note cards: white ones for scenes, blue ones for songs. And, really, you want to turn the white cards into blue ones — you want the songs to do most of the [work].” 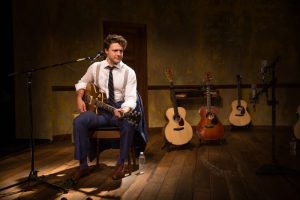 Despite the folky acoustic guitar sound of The Lion — and of other songs on Escapist Papers’ albums — Scheuer, who was raised in Larchmont, NY, and spent high school years at an English boarding school, didn’t grow up listening to folk music. “I listened to The Who and Led Zeppelin and The Beatles and Van Halen and Queen,” he says. “Eddie Van Halen is my favorite guitar player. When I was 12…I practiced guitar six hours a day, to try and learn all the acrobatic guitar work.”

Scheuer’s immersion in other genres didn’t prevent him from finding a theatrical voice rooted in musical theatre, pop and folk traditions: “The melodies are for the most part diatonic, there are verses and choruses and bridges,” he says. But from the beginning, both director and actor were certain that they wanted The Lion to defy traditional conventions of musicals and one-man shows. No jazz hands, no dancing, no impersonation of supporting characters or switching of hats. The Lion was going to be simple, presentational, confessional. More coffeehouse gig, less Guys and Dolls. 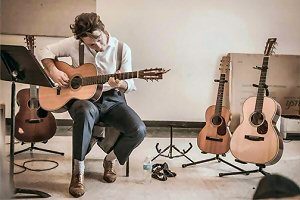 “We’ve all seen one-man shows where somebody’s running all over the stage to kind of apologize for the fact that there’s only one person,” says Daniels. “I wanted to play to Ben’s strengths. Ben is not a classically trained actor. He is a very charming flirt who is a singer-songwriter. Even before he met me, he would go to his friends’ houses and he would play [his songs] in their kitchens. We wanted to set up this atmosphere that your friend Ben was coming over to tell you the story of how it happened.”

In 2016, Daniels and Scheuer will be working again as director and writer, respectively, on Scheuer’s new multiple-actor musical — “about forbidden sexual desire and how so often the things we want most are the things we’re least comfortable asking for” — commissioned by Williamstown Theatre Festival in Massachusetts. (Mandy Greenfield, WTF’s artistic director, was responsible for giving The Lion extended development and its first New York City life in summer 2014, when she was producer of Manhattan Theatre Club‘s Off-Broadway programming.)

“I know Ben’s thrilled to finally be writing a duet,” says Daniels.

Learn more about The Lion on tour, and hear sound clips, at www.TheLionMusical.com.

This feature appeared in the summer 2015 issue of the magazine Listen: Life With Music and Culture.