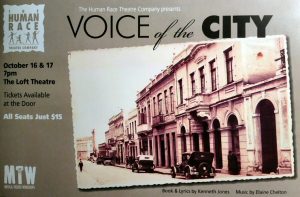 The following review by critic Russell Florence, Jr. appeared in the Oct. 18-24, 2006, edition of Dayton City Paper, following Oct. 16-17 script-in-hand workshop presentations of Voice of the City by Human Race Theatre Company at its Loft space in Dayton, OH. Karen Azenberg directed, Sean Flowers was the musical director. My composer and I weren’t told critics were sneaking into the performance. (Dayton Daily News was there, too. Here’s that positive review.) I would have minded more had the reviews been negative. They were very encouraging. Here’s the official website for Voice of the City. Here’s City Paper’s review, uncut.

[pl_blockquote pull=”left” cite=”Russell Florence, Jr.”]Just when you thought today’s musical theater writers had stopped believing in material that doesn’t have to apologize for being a little bit old-fashioned or downright schmaltzy, along comes lyricist/librettist Kenneth Jones and composer Elaine Chelton’s delightfully refreshing Voice of the City, which received an enjoyable staged concert reading by the Human Race Theatre Company on Oct. 16 and 17 at the Loft Theatre.

Set in O. Henry’s New York in 1906 and fluidly directed by Karen Azenberg, Voice of the City told the story of young typing girl Sarah Smith (a radiant Meegan Midkiff), who learned through a series of dramatically sound circumstances that some expectations are simply not meant to be once she meets and falls in love with waiter/songwriter Adam Green (an admirable Scott Hunt).

Despite the fact that the Act I opener lacked punch and two ensemble-heavy numbers in a German restaurant seemed overdone when performed back-to-back, Jones’ charming lyrics and Chelton’s lilting melodies combined on the whole for a gem-filled score that grew more infectious with each scene, as if Jerry Herman had a hand in it. “The Journey of My Life,” “Maybe We Should Leave Her Alone,” “In Harmony,” “A Midnight Walking Tour” and “Letting Go” were among the highlights.

Even though this dandy diversion is still in its early stages, one thing is for sure. I haven’t been as excited abouta new musical’s prospects and popularity since viewing Duncan Sheik and Steven Sater’s Spring Awakening Off-Broadway over the summer.[/pl_blockquote]