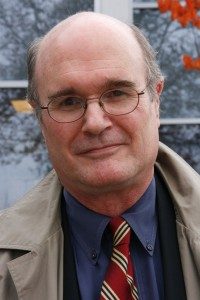 Playwright Charles Morey was so in love with the characters he created in his comedy The Granite State that he is going back for seconds. In April, the dramatist known for original works (Laughing Stock) and adaptations (Figaro) will hear a first reading of Crotched Mountain, the sequel to his New Hampshire-set play about an irascible novelist.

Crotched Mountain is actually a “prequel” to events of The Granite State, which had its world premiere by New Hampshire’s Peterborough Players in summer 2014. Here’s my earlier piece about that comedy.

“I’m having a small reading of Crotched Mountain at the Players Club on April 13 and looking forward to hearing it,” Morey told me. “Some of the cast from Granite State in Peterborough are reprising their roles.”

It’s a private industry reading, an opportunity for the playwright to hear the play and get some feedback. 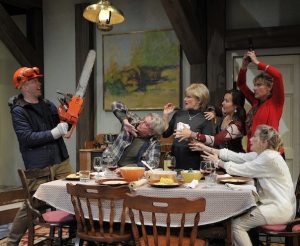 “After I finished the rewrite of Granite State following the production last summer, I felt I wasn’t completely done with some of those characters,” Morey said. “There was more to mine in the complicated relationship of Anna and George — and I gave Tom [George’s son] and Carrie short shrift in Granite State. So, this play picks up three years prior to the events of Granite State, a few months after the death of George’s third wife, Kate, when Anna, as she says in Granite State, ‘tried to put George back into something resembling human form.'”

The new play gave Morey “the chance to introduce Tom and Carrie to each other and let their relationship grow from initial antagonism, to sudden lust, to something that will eventually grow into a marriage. That part of it is a real rom-com. And, I always wanted to write the housekeeper Louise, ‘the thin-as-a-broomstick, aging hippie, born again Christian who looks as if she smoked most of the pot sold in New Hampshire since the summer of love.’  I kept trying to get her into The Granite State — but never managed to find a real function for her in those events — but here, she ends up being central in some ways.”

Like the earlier Cowardesque play, it’s “definitely a comedy,” the writer says, “but a bit darker.”

I asked Morey to explain the title.

“Crotched Mountain is a real mountain in New Hampshire that the house we once owned in Hancock, NH, looked out upon,” he said. “I may have chosen it for no better reason than that. I suppose it could change were I to come up with something different. So far my agent hasn’t objected, but I’m sure she’ll make her thoughts known at some point. But I like the word ‘Crotched’ [pronounced Crotch-ed — not Crocht] for its suggestion of ‘crotchety’ and connotations of flinty and stubborn — as is George. Monadnock — the famous southern New Hampshire mountain mentioned in Our Town came to mind, but I’m toying with the idea of a third ‘George’ play and I think that may end up being Monadnock — if it ever gets written. Who knew there was a possible trilogy or I’d have the hubris to write it?”

The Los Angeles company A Noise Within is currently presenting the West Coast premiere of Morey’s Figaro, freely adapted from the Beaumarchais comedy The Marriage of Figaro, through May 10. Critics have embraced it there. It’s published by Dramatists Play Service.

This summer Morey will direct Charley’s Aunt for Peterborough Players.