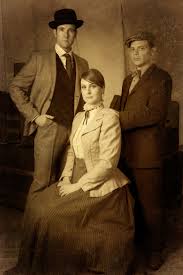 God’s Country, a new musical by composer Elaine Chelton and lyricist-librettist Erik Johnke, makes its world premiere July 18-24 as part of the New York Musical Theatre Festival (NYMF). The tale of Irish identity, community and romance in 19th-century Manhattan will get five performances on a scattered schedule in the Romulus Linney Courtyard Theatre in the Pershing Square Signature Center on West  42nd Street.

Elaine is the wildly talented, melody-filled composer of my musical Voice of the City (visit VoiceoftheCity.com). Her hands are an orchestra — she’s one of the principal pianists for New York City Ballet. I first met her when we were first-year members of the BMI-Lehman Engel Musical Theatre Workshop in fall 1998 (she was a composer, I was a lyricist). By the second year, we were writing partners on the O. Henry-inspired Voice of the City, another story set in Manhattan, but 40 years after the 1871 setting of God’s County. Learn more about Elaine at her official website.

(Voice of the City was seen in York Theatre Company’s Developmental Reading Series  and in the Musical Theatre Workshop program of Ohio’s Human Race Theatre Company.)

According to the creators, “God’s Country takes place in 1871 in the lower Manhattan area known as Five Points, the city’s most dangerous place to live. Born to wealth and privilege, young Englishman James Watson is shattered by his mother’s death and subsequent discovery that he was adopted and is really Irish.  Determined to discover his true identity and find his birth mother, whom, he learns, had gone to America to start a new life, James impulsively embarks on an epic journey of discovery. Sweeping melodies with an Irish flavor carry this dynamic tale to the streets of New York City where James hopes to find his birth mother.

“Once in New York, James befriends Tom Killian, who introduces him to New York’s Irish community and agrees to aid him in his search. In exchange, James teaches Tom to read and gives him food and shelter. Soon James founds New York’s first newspaper targeting the city’s Irish immigrants, and uses the paper as a way to interview women who may know his mother’s whereabouts. In his work as a journalist, James meets a young temperance worker, Kathleen Cahill, and they fall in love. As James becomes increasingly occupied with his search for his mother, Tom, sensing an opportunity, quickly rises to become the real editor of the newspaper, and has his eye on Kathleen as well. The production is set in a rich historical context and has classic elements of drama: a quest for identity, a love triangle and a villain. But it also has scenes of rollicking humor in the pubs of Five Points, large production numbers with stirring music, and a contemporary resonance with our current struggles with immigration. The score is a blend of Irish music and Broadway melodies performed by an ensemble cast of nine playing a wide variety of roles.”

Listen to some music clips of God’s Country here.