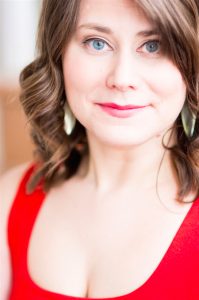 A hike along the Appalachian Trail is more fraught than expected for a grieving man in Chelsea Marcantel’s new play Even Longer and Farther Away, getting its world premiere April 15-May 15 by The New Colony in Chicago. A snow storm and an unexpected visit with his half-sister are on the map for Elliot in the comic drama.

“Elliot is a man who’s 30, who just lost his father, and who feels like he’s still waiting for his life to start,” Marcantel, a second-year Lila Acheson Wallace American Playwrights Fellow at The Juilliard School, told me. “He decides to hike the Appalachian Trail, as a way of dealing with his grief, because his father always told him they would do that together. But the trip turns out to be much less straightforward than he imagined. Elliot sets out on the trail with his best friend, and winds up snowed in overnight with his half-sister and her boyfriend.”

She added, “He’s not a fan of his half-sister; he kind of feels like she stole his father way when she was born. The two women who run the café where the four of them end up also rub him the wrong way: they’re talkative, nosy, and telling all these stories that seem unrelated to what he’s going through.  That’s where we start the play: this guy just wants to do the hike he set out to do, and the reality of the other people in the world get in his way and literally stops his journey in its tracks.”

The New Colony calls Even Longer and Farther Away “a new play about memory, family and finding your way,” set “in a town not found on a map.”

Marcantel is a playwright originally from Louisiana, who lived for many years in Chicago. She is an active self-producer of her own work, and has also collaborated with Victory Gardens, The Hypocrites, The Side Project, 20% Theatre, Collaboraction, The Inconvenience, Jackalope Theatre and Cabaret Vagabond, among others. Her work has been produced in New York, Los Angeles, Toronto, Minneapolis, Virginia, Kentucky, Louisiana and North Carolina. She has taught in the English and Theatre departments at Virginia Intermont College and Emory & Henry College. She is a member of the Dramatists Guild of America and The Playwrights Center. She’s repped by ICM.

For tickets and information, visit www.thenewcolony.org. Learn more about the playwright at her official website.

In the days leading up to the premiere, Chelsea Marcantel shared some thoughts with me about Even Longer and Farther Away.

I love plays where the idea of “journey” is evident — personal, emotional, geographical, physical.

Chelsea Marcantel: I’ve always been fascinated by pilgrimages and the reasons that people take them.  I think the trails we have in the U.S. — the Appalachian Trail, the Pacific Coast Trail, etc. — are the closest things we have to pilgrimages in this country.   In terms of storytelling, it’s a format as old as humanity: a hero sets out on a quest to restore harmony to the community, after an event that disrupts it. But grief is the kind of journey you set out on that you never really come to the end of. Elliot’s life never goes back to the way it was, and neither does he.

I’m always curious about first inspiration of play. What did you first “see” when cooking it up? A character? A conflict? A place?

Chelsea Marcantel: I gauge my interest in a subject, and whether or not I want to write about it, based on whether or not something in it breaks my heart right now. I’m thinking a lot about families right now — parents and siblings. And, as I said, I’ve always been kind of obsessed with pilgrimages. So I guess the first spark of the play was my curiosity about whether a brother and sister could go on a pilgrimage, and it would tear them apart instead of bringing them together. That idea breaks my heart, so I knew I wanted to write about it.

Chelsea Marcantel: I lived in Appalachia for three years, between my time in Chicago and my time in New York. Our house was about 20 minutes from the Appalachian Trail. I spent a lot of time on other trails in the area (though not the Appalachian Trail) and more time outside than I had in years. I grew up in Louisiana, so there was something about the culture of Appalachia that felt familiar to me, but at the same time it was new and fascinating. There’s an ancient tradition of storytelling that runs through those mountains, and beautiful music, and an incredibly self-sufficient spirit, and all of that appealed to me. I try to carry a lot of the experiences I had there into this play. Oral Storytelling in the Appalachian way is a different art form from theatre; it’s not just speaking monologues. The Storytelling culture had a heavy influence on Even Longer and Farther Away. 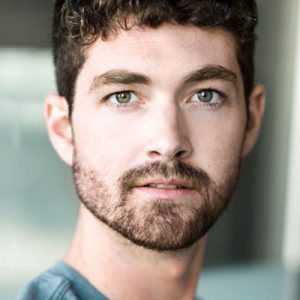 Patriac Coakley plays Elliot in “Even Longer and Farther Away.”

Elliot finds himself “in a town not on the map.” Is there a supernatural element to the play?

Chelsea Marcantel: I don’t want to give too much away, but I will say this about the play: the line between folk tales and real life gets very, very blurry.

Do you have a relationship with the natural world, or are you a creature of the city?

Chelsea Marcantel: I am absolutely a creature of the city, but I love nature as well.  Mountains, in particular, and large bodies of water. I’ve lived in lots of different places, and I kind of tend to bloom where I’m planted, but I prefer to have access to water when I can. Our front porch in Appalachia looked out over the Blue Ridge Mountains, and I really really miss that in New York City.

Does the new play share any common threads with other plays you’ve written?

Chelsea Marcantel: If there is a common thread that runs through my work, or a mode of storytelling that I consistently employ, it is that I like to bring an audience into a very specific world with very specific rules, and then subvert those rules, or show characters who are having trouble living inside those worlds.  My play Everything Is Wonderful does this inside an Amish community, and my play Tiny Houses does this within a group of people building a tiny house, and my newest play, Airness, does this within the world of competitive air guitar. Humans are small-group primates, and I’m interested in investigating how power fluctuates and people find their way through cosmic struggles inside small groups.

When you’re writing, do you think of theme(s), or is that something that emerges from action, plot, character?

Chelsea Marcantel: I feel like theme is something that emerges within the audience’s experience. Five different people could see the same production of Hamlet on the same night, and walk away with five different themes that affected them, and they’d all be correct. I also think that themes land on you differently at different points in your life. There are pieces of art that I’ve heard or read or seen that meant one thing to me at one age, and then years later I’ve gotten something completely different out of the same piece. There’s a line about that in this play — about people hearing the stories they need to hear when they need to hear them. Theme is not something I think I can control while writing. I’m telling stories, and the audience is creating meaning for themselves individually.

Share a little bit about your relationship with Chicago and The New Colony and your roots in Louisiana?

Chelsea Marcantel: I grew up in Louisiana and went to undergrad and graduate school at LSU in Baton Rouge. I love Louisiana and I go back there a lot — in fact, I’m going next week for a friend’s wedding. It’s a beautiful, rich culture and I love my family.  My dad will read this interview and ask me when I’m moving home.

I lived in Chicago for almost six years, then in the foothills of Appalachia for three, and now I’m in my second year in New York City. I’ll probably live on the West Coast and in the Pacific Northwest at some point, so I can really get an immersion in lots of parts of the country. I guess my own personal pilgrimage is a meandering one, but I’ve deeply loved every place I’ve lived and the people who’ve come into my life through those moves. 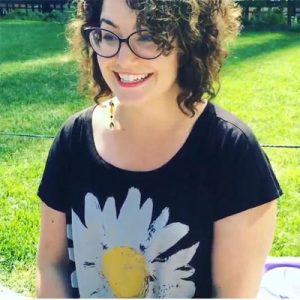 Chelsea Marcantel: I lived in Chicago…and during that time I had shows produced in storefronts around the city, and I did some self-producing of my own work. I’ve also had shows produced in L.A., New York City, Toronto, Louisiana and elsewhere. The New Colony is a classic non-Equity Chicago storefront; that’s the community I came up in, and that’s the kind of all-in, fully-invested work I love to be part of. I’ve been a huge fan of The New Colony’s work for many years, dating back to when I lived in Chicago. I’ve been friends with [director] Thrisa [Hodits] and other TNC company members for a long time, and I’ve always wanted to work with them, so I’m glad this collaboration is happening.

What’s next for you?

Chelsea Marcantel: I have a couple of readings and productions on the docket for this summer and beyond, but nothing has been announced yet, so I can’t spill the beans.  I’ll graduate from Juilliard in May, and I’m currently doing groundwork in writing more plays, my first musical, and a pilot. Juilliard has really been cross-training for writing across disciplines, and I’m excited to hit the ground running in a lot of directions at once. I realize that sounds nuts, but I promise, I do have a master plan.