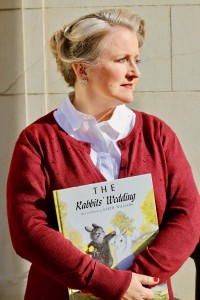 The six-actor drama will introduce California audiences to the little-known true story of a Montgomery librarian named Emily Reed (to be played by Karen DeHart) who stood up to a state senator, E.W. Higgins (played by Erik Gandolfi), who is intent on banning a children’s book in the Deep South of 1959. This is one of at least 11 regional productions of the play being staged in the 2017-18 season. Ask for a perusal copy here. 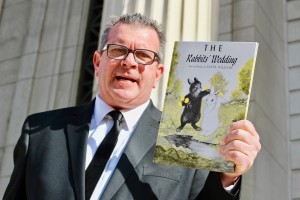 Here’s how City Lights bills the play: “It’s 1959 and the Civil Rights movement is starting to grip America. In Montgomery, Alabama, a fight over a controversial children’s book — one in which a black rabbit marries a white rabbit — pits librarian Emily Wheelock Reed against segregationist Sen. E.W. Higgins. Childhood friends reunite, only to be caught up in the political and racial tensions of the time. Inspired by true events, this drama explores tests of character and emotions that reshaped our nation.”

Alabama Story, a nominee for the 2016 Steinberg/American Theatre Critics Association New Play Award and a 2014 finalist in the O’Neill National Playwrights Conference, had its world premiere in 2015 by Pioneer Theatre Company in Salt Lake City. By 2018 it will have enjoyed at least 17 productions since its debut. In addition to playing San Jose, in 2018 it will be seen in North Carolina, Western Massachusetts, Iowa, Tennessee, Texas, Vermont and beyond.

In Alabama Story, a children’s picture book called “The Rabbits’ Wedding” stirs the passion of a segregationist politician who does not appreciate its “brain-washing content.” Artist and author Garth Williams (who created images for “Little House on the Prairie,” “Charlotte’s Web” and “Stuart Little”) fashioned a delicately illustrated story about rabbits of different colors marrying in a moonlit meadow. (The 60th anniversary of the book’s publication is in 2018.) The freedom-to-read/censorship battle between lawmaker Higgins and librarian Reed made international headlines. 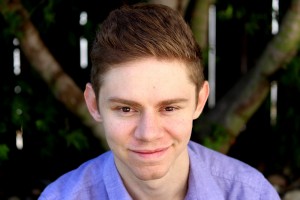 Garth Williams himself becomes a character in the drama, friskily jumping into multiple roles. (“I wrote the picture book,” he says. “I know something about creating characters.”) In San Jose, Steve Lambert will play Williams and other characters.

A parallel story within the play charts the reunion of former childhood friends, Joshua and Lily — an African-American man and a white woman — who meet in adulthood to unpack a painful event from their past, echoing tensions in the library conflict. Maria Marquis will play Lily; Bezachin Jifar will play Joshua.

Jeremy Ryan will play Emily Reed’s assistant librarian, Thomas, who has a complicated relationship with his workplace, being a native of Montgomery. 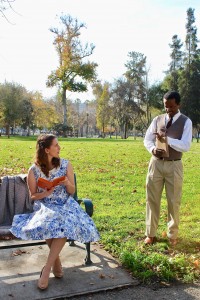 Maria Marquis as Lily and Bezachin Jifar as Joshua in “Alabama Story” in San Jose. (Photo by Taylor Sanders)

Playwright Kenneth Jones characterized the highly theatrical Alabama Story this way: “It’s a romance, a political thriller, a memory play, a workplace drama, a tearjerker, a comedy, a discussion about race, censorship and political desperation, and a rumination on the power of books. Most important, it’s a play about how we behave when we face terrible circumstances — how character is revealed in times of transition, change and crisis.”

Jones’ new rueful comedy Hollywood, Nebraska, was popular in a six-performance public workshop by Wyoming Theater Festival this past September. Ask for a perusal copy here.