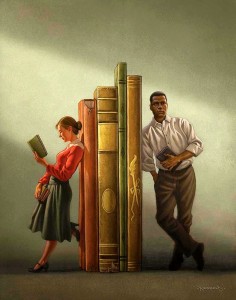 The play was a finalist in the 2014 National Playwrights Conference of the Eugene O’Neill Theater Festival.

Lambert, a veteran of Alabama Shakespeare Festival since 1986, and a native of Birmingham, AL, will play embattled Alabama state librarian Emily Reed (who happened to not be a native Alabamian). Reed seeks to protect books that are threatened by local critics, including bullish segregationist state senator E.W. Higgins (played by Broadway’s William Parry) in 1959 Montgomery.

The politician’s primary literary target is Garth Williams’ 1958 children’s picture book, “The Rabbits’ Wedding,” about the marriage between a fuzzy black rabbit and a cuddly white rabbit. It was viewed by some Southerners as pro-integration propaganda, a brainwashing tactic to steer children toward the commingling of races. (Williams is best known for his artwork for “Little House on the Prairie,” “Stuart Little” and “Charlotte’s Web.”)

Alabama Story puts isolated librarian Emily Reed — and the very idea of the freedom to read — in the spotlight as she faces challenges from the people who fund her job. The highly theatrical play leaps from pages of history, exploring the controversy that earned Reed international headlines (and a later citation from the Freedom to Read Foundation) when she squared off against a state senator in defense of the innocuous book by Williams (played by Stephen D’Ambrose).

The political intrigue is crosscut with the story of two former childhood friends — African American Joshua Moore (played by Samuel Ray Gates) and white Lily Whitfield (played by Kate Middleton) — who are reunited in adulthood that same year in Montgomery, sharing memories of their tangled small-town Alabama roots.

Here’s how PTC bills the play: “A gentle children’s book with an apparent hidden message stirs the passions of a segregationist senator and a no-nonsense state librarian in 1959 Montgomery, just as the Civil Rights movement is flowering. Inspired by true events, Alabama Story puts political foes, star-crossed childhood friends, and one feisty children’s author on the same page to conjure a Deep South of the Imagination. The love letter to reading coincides with the 50th anniversaries of the Civil Rights Act and the Voting Rights Act.”

Parry created the role of the Boatman/Charles Redmond in Sunday in the Park With George on Broadway and was the original Proprietor in Assassins Off-Broadway. Parry’s many credits include Richard Harris/Richard Burton tours of Camelot (in which he understudied King Arthur and often went on); Road Show for The Public Theater; Goodspeed Musicals’ recent The Circus in Winter; the 2003 Broadway revival of Gypsy; the original run of Jesus Christ Superstar; Lincoln Center Theater’s Dessa Rose; and The Public Theater‘s The Knife, Cymbeline, The Misanthrope and Agamemnon. 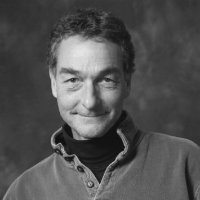 Stephen D’Ambrose, a Twin Cities favorite, will play illustrator Williams, who serves as narrator and nimble multiple supporting player in the play. He’ll assume a handful of choice roles including the sagacious state representative, Bobby Crone, who counsels Sen. Higgins. D’Ambrose is a veteran actor who has worked at the Guthrie Theater (on and off since 1980), Folger Theatre, Two River Theater in New Jersey, Arizona Theater Company, San Jose Repertory and in the national tour of August: Osage County.

Seth Andrew Bridges created the role of Thomas, Emily’s assistant at the Alabama Library Service, in the first public reading of Alabama Story in spring 2013 at Alabama Shakespeare Festival, where he was part of the season’s acting company 2012-13. He also appeared in the TACT/NewTACTics reading of Alabama Story in June 2014. A graduate of New York University’s acting program, he recently played Hal in Proof and the bumbling waiter Alfie in One Man, Two Guvnors at TheatreSquared in Arkansas.

Samuel Ray Gates, who plays the mission-minded Joshua, appeared in Goodman Theatre‘s Trinity Rivers Plays; Off-Broadway’s Aunt Dan and Lemon for The New Group; Three Seconds in the Key for New Georges; Electra at the Classical Theatre of Harlem; The Brother/Sister Plays at McCarter Theatre Center; McReele at Wellfleet Harbor Actors Theater; Ma Rainey’s Black Bottom and Fences at Swine Palace; and A Midsummer Night’s Dream, Coriolanus, The Winter’s Tale and Romeo and Juliet at Shakespeare & Company. His television and film credits include “Boardwalk Empire,” “The Men Who Stare at Goats,” “Kings,” “Law & Order,” “Law & Order: Criminal Intent” and “Rescue Me.”

Kate Middleton, who plays the rueful Southern-bred Lily, is a New York City based actress who grew up in Greensboro, NC, and graduated from The University of North Carolina at Chapel Hill. This fall in New York City, she appeared in Mac Rogers’ Asymmetric at 59E59 Theaters, produced by Ground UP Productions. She has worked in regional theatres including Repertory Theatre of St. Louis, New Jersey Shakespeare Festival, Dorset Theatre Festival, Geva Theatre Center, Cape Playhouse, Triad Stage, Huntington Theatre Company and elsewhere. Her previous gig at Pioneer was playing Lt. Galloway in A Few Good Men (directed by Karen Azenberg). Her TV credits include “Mercy,” “Law & Order,” “Law & Order: SVU” and more.

Read the Q&A with playwright Kenneth Jones posted in the Blog section of Pioneer Theatre Company’s website. It appeared during the PTC developmental reading of the play in April 2014.

The production of Alabama Story coincides with the 45th anniversary of the Freedom to Read Foundation, of which Reed was a charter member. Learn more about FRTF, which defends the First Amendment in libraries through litigation, education, and grants.