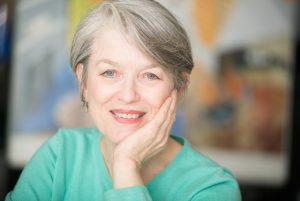 The Road to Where, the folk-tinged musical memoir that actress-writer Cass Morgan conjured from real events, places and people in her life, will get a private presentation in Manhattan June 8 in anticipation of an August run at Weston Playhouse in Vermont.

Morgan is the Broadway actress and songwriter whose soulful, crystalline voice has brought texture to musicals Memphis, Mary Poppins and her own musical Pump Boys and Dinettes. The Road to Where, which has a script by Morgan and original tunes by Morgan and a handful of others, had its world premiere April 23-May 10, 2015, at Geva Theatre Center in Rochester, NY, her hometown. The Geva cast and musical director/orchestrator Steven Alper reunite for this private listen. 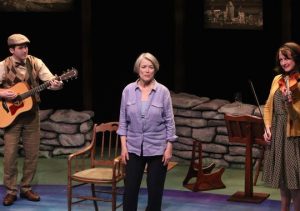 Eli Zoller, Cass Morgan and Megan Loomis in “The Road to Where” at Geva Theatre Center. (Photo by Ronald L. Cronk II)

Here’s how Geva billed The Road to Where: “With the help of three talented musicians, Broadway veteran and writer Cass Morgan searches for her roots. A trip to the West of Ireland sparks memories of her childhood in Rochester, her growing up in a Florida trailer park, and a need to reconcile with her parents in an enchanting evening of story and song.”

The production will reconstitute at the Weston Playhouse in Weston, VT, Aug. 13-30.

The roots of the show are in an earlier intimate musical by Morgan called True Home. Hudson Stage Company in Westchester County, NY, produced it in 2002. (The now-defunct Charlotte Rep also developed it.) Geva artistic director Mark Cuddy staged this new, expanded and sharpened musical tale, which Morgan told me “is a search for home, and what that really means.” 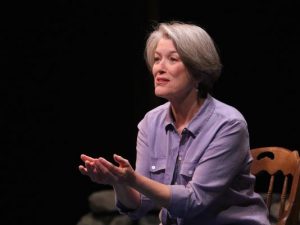 Morgan is repped by Ron Gwiazda at Abrams Artists.

Read my earlier interview with Cass Morgan about the Geva premiere of The Road to Where.