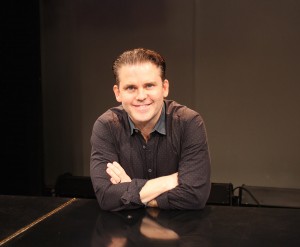 Robert Creighton, the triple-threat fireplug of a performer who has distinguished himself on Broadway as an actor, singer and dancer, is playing movie tough guy James Cagney in the New York City premiere of Cagney, the musical that he co-wrote with Peter Colley and composer Christopher McGovern. After regional productions — and revisions and refinements to the material over the years — the award-winning show is being presented Off-Broadway by York Theatre Company in association with Riki Kane Larimer.

Creighton fielded my questions about his showbiz musical during previews, which began May 19 in anticipation of a May 28 opening for a limited run to June 21. 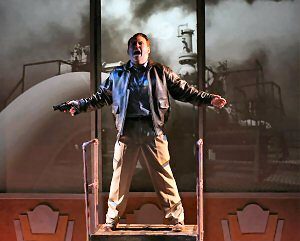 Broadway vet Creighton (Anything Goes, The Mystery of Edwin Drood, Chicago, The Lion King, The Little Mermaid) is joined by Jeremy Benton, Danette Holden, Bruce Sabath, Josh Walden and Ellen Zolezzi. Book is by Colley. Music and lyrics are by Robert Creighton and Christopher McGovern.

York bills the show as “a high-stepping, explosive new musical about legendary star and the screen’s greatest tough-guy, James Cagney. Cagney follows the actor from his humble beginnings in New York City’s Lower East Side through his rise as a vaudeville song-and-dance man to his superstardom in Hollywood. In this insightful and surprising musical journey, a brand new original score filled with show-stopping song and dance numbers is augmented by George M. Cohan songs. Cagney was the consummate performer who could do it all — sing, dance, play the bad guy, the good guy, the patriot, the gangster.” 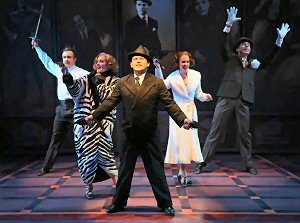 Following its 2009 world premiere at (the now sadly defunct) Florida Stage, Cagney won Florida’s Carbonell Award for Best New Work and earned five additional nominations (Best Actor, Best Production of a Musical, Best Director for Castellino, Best Supporting Actor, Best Musical Direction and Best Choreography). It was later produced by Riverside Theatre in Florida and at the Drayton Festival and Huron Country Playhouse in Creighton’s native Canada. Prior to the current run, Cagney was seen in an industry reading at York Theatre Company’s home in June 2014.

The company of “Cagney.” (Photo by Carol Rosegg)

Cagney had its premiere in 2009. What have you learned since that time, and what leaps forward have you made in the writing? How is it different now than in Florida?

Robert Creighton: This show started with me attempting to sketch out a one-man play telling the story of Cagney. Then I began conversations with Peter Colley — who I met while doing a play of his in Canada in the summer of 2001 — and we created a four-person musical with a mix of period music and about nine songs of mine. Then when Florida Stage agreed to premiere our piece they introduced us to Bill Castellino who would serve as director/dramaturg and Christopher McGovern, who took the lead on the musical side and together we four took apart the first version and rebuilt it into a six-person musical that we premiered there.

Are there wholly new songs added and subtracted? Share a little bit about what’s new.

Robert Creighton: The Vaudeville section is completely reshaped between last summer’s reading of Cagney and this production. The Willie Cagney solo is now a trio and a tap number with the two men. The song “Some Other Guy” used to be sung by “dead” Ma but we kept her alive in this version and she sings it to Jimmy’s face! There have been lyrics necessarily rewritten as the story has been greatly honed and the songs need adjusting to keep moving it all forward. 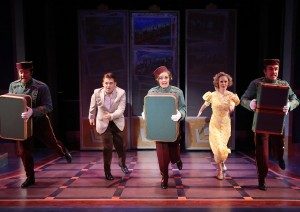 The company of “Cagney.” (Photo by Carol Rosegg)

Fans of Cagney’s career will expect a musical about him to include some George M. Cohan classics from Cagney’s film bio of Cohan, “Yankee Doodle Dandy.” Remind me what Cohan songs are part of the show? (And were there rights issues, or is the material now public domain?)

Robert Creighton: We have to have Cohan music in this show! The audience would be disappointed if we didn’t. I would be too! There is a large USO section which makes the audience bonkers and that is all Cohan. The Act One Finale is a deconstructed “Grand Old Flag,” and “Yankee Doodle” is in there, but not saying where. And it is all public domain, thank you very much.

Bill Castellino is a wonderful visualist as a director. His production of Storyville at the York was filled with life and spectacle. But he’s also a dramatist himself. He directed the Cagney premiere. What does he bring to the table for this chapter in terms of guiding you and your collaborators as you readdressed the dramaturgy?

Robert Creighton: Bill’s contribution to this piece and the fact that we are having our New York premiere at the York cannot be overstated. He is simply the smartest guy in the room and brings that to bear on the refining of the story in not only the words, but how we are telling it visually. 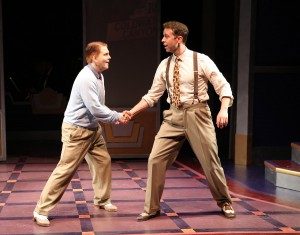 Is librettist Peter Colley actively involved in the production?

Robert Creighton: Peter was kept very busy in the two months leading up to rehearsal as Bill, Christopher, Jim Morgan and myself heard the play read aloud around a table here. [We] discussed ways to refine the story and make it clearer and stronger and would present Peter with notes and a deadline. It worked well for everybody. We did that three times leading up to rehearsal and went into it with a much improved script ready to be put on its feet. Seventy-five percent of the script hasn’t changed except for minor tweaks since we first did it in Florida and won the Carbonell for Best New Work.

Take me back to your first experience of knowing who Cagney was. What drew you to him as a fan?

Robert Creighton: When I first moved to New York, I was told by an acting teacher that I reminded him of Jimmy Cagney. I started watching his films and became instantly mesmerized! (Read: obsessed!) Then I started learning about his life and I just felt connected somehow. Not that we came from similar backgrounds or anything. I honestly can’t explain it. Then in the film “Man of a Thousand Faces” he is playing Lon Chaney and his son’s name is Creighton Chaney. So there was this actor I was becoming so engrossed in discovering yelling “Creighton! Creighton!” on the screen. I took it as a sign! 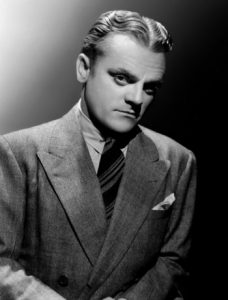 You are a character actor, and ultimately — despite his leading roles — Cagney (1899-1986) had the qualities of a character man. What do you share with him as a performer? What do you most respect about him?

Robert Creighton: I think we share an abundance of energy. And what I admire about most is that he was so detailed in every character he did. He had little quirks that made them memorable and jump off the screen. I do my best at following in that path.

As I recall, Cagney ultimately didn’t have major obstacles in his life. (Or did he?) Was that a challenge to you as a co-writer/actor?

Robert Creighton: Yes. Finding the conflicts was always the big question. He was successful, married to same woman for 66 years, scandal free — but we found conflict and in this version we have gone even deeper into an examination of his psyche and the battles with his own persona (that he didn’t control) and his need for justice and sticking up for the little guy.

Share a little bit about the frame of the show. It’s a flashback?

Robert Creighton: The scene from which we flash back is backstage at the 1978 SAG Awards where Cagney is getting the Lifetime Achievement Award. We made up that Warner is asked to present it to him and they are backstage together. All hell breaks loose as they get into each other and we flash back from there to just as Jimmy is getting into Vaudeville to Broadway to Hollywood to going before the House Committee and accused of being a communist through “White Heat.” We visit backstage four times throughout the evening and, finally, the award speeches. 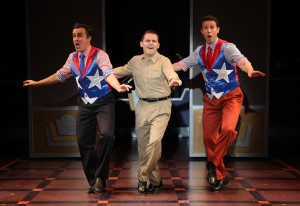 Give me a sense of how the show moves, dance-wise. Is Joshua Bergasse kicking your ass? Does the show dance more than it ever has? How so?

Robert Creighton: Is Josh Bergasse kicking our ass? In a word…yes! He has choreographed the show twice before (the last two productions) and basically took that and amped it all up a few notches. We have a cast that can do anything in tap shoes and I think Josh is enjoying the bag of tricks he has been given. Even though it’s only six in the cast and maximum five tapping at once, it feels like a big show for the York. People better fasten their seatbelts for the USO number!

What’s been the major challenge of creating the show, either as an actor or as a co-author?

Robert Creighton: In terms of writing the show, letting go of all the extremely interesting facts and stories about my hero Cagney that I want to tell people about and include in the show because Castellino says we have to stick to the story we are telling or some nonsense like that! In terms of playing Cagney, when he played George M. Cohan and won the Oscar he said, “I don’t believe in imitating because then you can only do what they did. You try and capture a bit of their essence and then you simply play it for real.” I am taking Cagney’s advice when playing Cagney. It is a thrill every time I step on stage to tell his story.